G’day folks! Last column I was a bit unlucky with the timing, Yokomo managing to release a new RTR when I had written most of the column, but had to take a break before I could finish it off. Well, it’s difficult to stay on top of the game at all times. But now the news are well and comfortably here, Yokomo has released an RTR version of their popular YD-2 chassi, and teased it with a the very enticing line: ”A new movement for YOKOMO Drift”

Looked pretty darn cool, didn’t it? A new movement? What could it be? Probably an RTR, what with the wheels and body we saw. 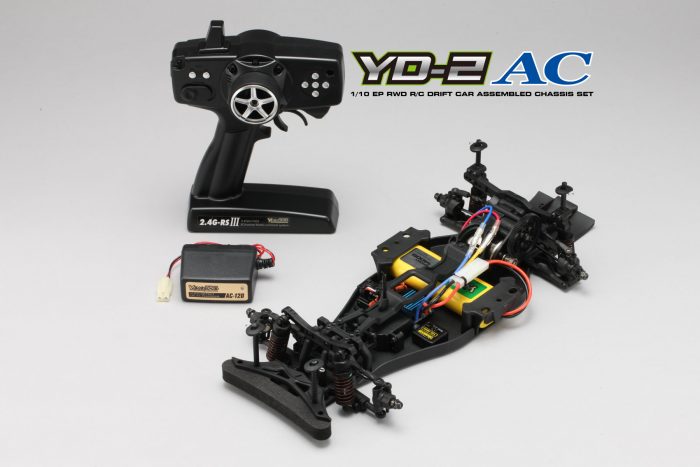 Yes, an RTR it was, but sadly, the truth of it wasn’t very exciting. Rather the opposite: the Yokomo YD-2 AC is a huge disappointment to me, and probably to most of the drifting world. What we’ve got in the box is a car with transmitter, battery and charger, but without wheels and body. How’s that for ”Ready To Run”? Does not cut it, in my opinion. In addition, the motor is brushed, and the battery is Ni-Cd. The people who might buy this one (not you, buy the MST RMX 2.0 RTR instead, or a kit), will probably be drifting on asphalt and I doubt those electronics will be up for it. Plenty of wheel speed will be needed to produce a drift – I know, since I drift mainly on asphalt – and hence this RTR ought to have been equipeed with a brushless setup.

Especially for that price! 450 bucks, not including a body, or wheels. Before this one is ready for the street, one will have to spend another hundy on wheels, tires, body and paint, not to mention a couple of hours to cut, paint and decal that body. 380 dollars will buy you a beautiful MST RMX 2.0S Mercedes Benz AMG GT3 (or any other of numerous body options to choose from). Another hundred dollars buys you a decent charger, battery and, should you feel the need, adjustable turnbuckles. Also, all this can be had in a hobby shop, and the car can be on a track with a fully charged battery thirty minutes later. Isn’t that what RTR is all about?

Really, what was Yokomo thinking? Suppose someone wants to give drifting a try and goes to the local hobby store, mind set on going sideways. Two boxes meet him. One with a beautiful Mercedes, all done up and ready to go, as soon as the battery – that he can buy at the same time – is charged. In the other box a ready built chassi, but he will need to buy a clear lexan body, the tools to cut it, the paints to paint it, and wheels to drive it. Which one will he choose?

Yokomo might subscribe on the podiums, but MST definitively won the RTR battle. Last column I joked that the ”New movement” hardly could be backwards. Well, turned out I really wasn’t funny at all.

Nonetheless, it’s a great hobby! By a MST RMX 2.0S RTR or a Yokomo kit (read this column, or this one) , get out, and lose that grip!