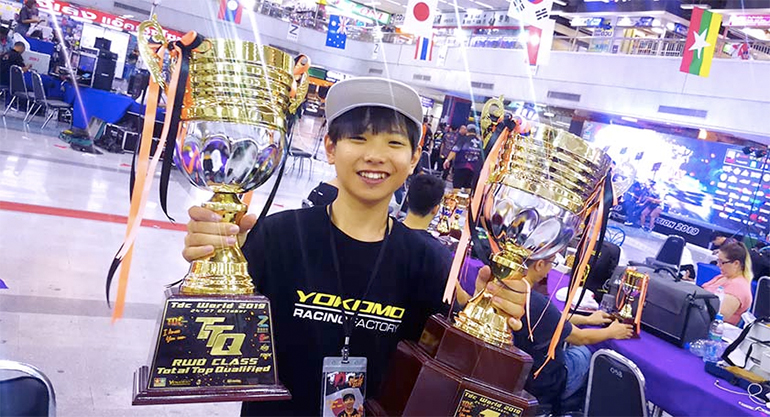 G’day mates! Long time no write, I apologize, yet hope that you have missed my column a lot. If so, why don’t you drop me an email at martin at bigsquidrc dot com, and let me know what’s on in that part of your brain that’s dedicated to RC?

Regarding the tardiness of this column, all I have to say is that I am a pretty normal guy when it comes to things RC related. Like most of you, I have a limited amount of spare time, no sponsors, a limited budget, but a love for the hobby. Especially for the casual aspect of it: hitting the street, the parking lot, the trails, the rocks or the water with a vehicle suited for the terrain at hand. Relaxing. Either standing in my garden and enjoying smooth drifts on the street, or walking the trails behind a crawler, or sitting on a jetty with a cup of coffee next to me while tacking a three feet rig.

Competing has never been on my mind before. Not because it doesn’t sound like fun – I’m actually a rather competitive type – but because it always seemed like a rather hefty investment in both time and money is needed. It’s not like I can walk up to an RC race, think “wow, that looks cool, I want to do it”, get a quick explanation of what I need to get, buy it off the shelf and turn up at the same track the next day with a vehicle that is going to stand a chance amongst the competition.

“Cool, you’re racing short trucks! I have been thinking of getting a Slash RTR, can I come compete tomorrow if I get one?” Not going to work very well, is it? I suppose you could turn up at a drift event with an MST RMX 2.0 RTR, but although it probably would be legal you would still feel like a fool as soon as you compared your black plastic chassis with everyone’s decked out YD-2’s. Not to mention racing with the really big boys, 1:8 buggy and such – ain’t no doing that on the cheap.

Competitions could be a good way of recruiting people into the hobby, if only it was easier to start.

Someone else thought the same thing, some fifteen years ago, an Englishman by the name of John Tushingham. What he wanted was something that onlookers could buy, use the next day and compete with the pros, without being limited by inferior equipment. Some good luck and hard work resulted in the Dragon Force 65 being released in 2012, and restricted class rules to go with it. That is, the “boat is raced as supplied by the builder with no modifications”, except some very minor ones like waterproofing a couple of defined weak spots on the hull and such.

How cool is that? Very. What that means, is that you don’t even necessarily need a boat to turn up at a competition. Some event organizers offer charter boats, for those that travel a long way and struggle with luggage limits. Easy peasy: just turn up, grab a boat, spend ten minutes adjusting the rigging to your liking (work wise the equivalent of adjusting a couple of turnbuckles a bit), and be confident that you can win the race even if you haven’t even touched your boat before – since it is exactly the same as the one you have at home.

The concept is awesome! Thousands of boats have been sold. Why haven’t someone come up with this idea on the wheel side of RC? Or perhaps someone has, and I am just not aware of it? Or is it because people can’t bear the thought of not upgrading? In a way it’s kind of a naked racing: you can’t in any way buy your way to a better place on the ranking list; with better quality motor, ESC, shocks or whatever, you simply have to race for it. Had this existed among drifters – or any other class of RC cars – I would seriously consider getting into competing. Buy something for a reasonable price, turn up, race, and know that you can copy the exact setup of anyone in the competition, without spending a dime on it. What’s not to like?

Hit the link to read another Losing Grip column.