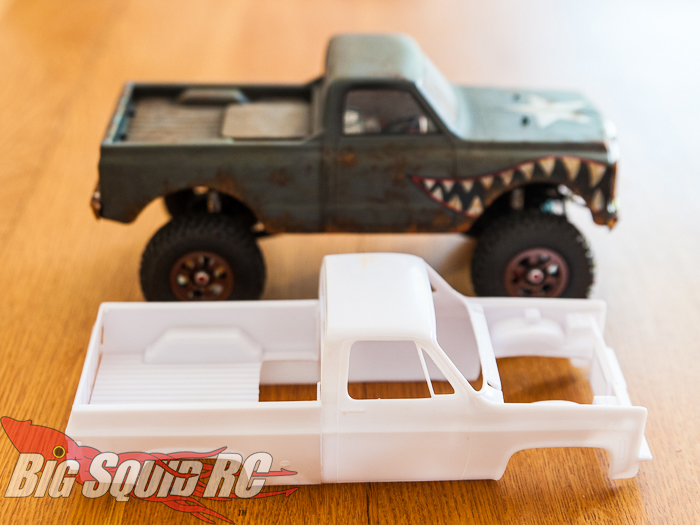 Procrastination – a tongue twister if ever there was one. In the picture above there’s an example of it, a long since unfinished scale body for my SCX24. According to Psychology Today procrastination “implies performing an alternative activity to the one intended and is synonymous with idleness.”

Regular readers might remember me writing about getting a scale body for the SCX24 way back in January, settling on a 1978 GMC Pickup, due to its good looks and probably perfect wheelbase. It was supposed to be awesome, maybe still will be. As with a lot of other projects I dove straight in, and then, well, you’ve already seen just how far I have not come.

Is this bad? Am I idle? Am I lacking in character? Am I flawed?

This is not going well. If found defending, better to attack right back. Let me ask another question instead. Do you have more than one unfinished hobby project? If so, why? Why did you not finished the previous project before starting on the next one? Have you indulged in performing alternate activities to the one intended? Hence having been idle, according to Psychology Today?

I am certain I am not the only hobby procrastinator, moving on from one project to the next when the first one proved to tiresome. But is this a bad thing? Not necessarily. Let me offer a perspective different from numerous psychologists out there who will tell us we need to quit this despicable behaviour in order to increase our productiveness.

Have I gotten less done, hobby wise, because I have not finished the hard plastic body that really should be my first priority? No. I’ve gotten lots of things done, not just the thing on top of the list. And this is the thing: if the number one priority seems difficult and boring, everything below it will seem a breeze. Lots of thing will get done, because they suddenly seem easier than ever before. Rather than working on that body, I have sorted screws, refilled shocks, filled in boring customs forms, written columns, gone driving with my kids, started reading up on electronics and spent time daydreaming of my next build. See? Lots of important stuff, including the last one – because what who knows where daydreams will lead? For one thing, this column would not exist.

In short, why do today what might not have to be done tomorrow, when priorities might have changed? Why spend a lot of time getting this body work on my SCX24, when tomorrow a better looking one might be released? Why not spend that time cleaning and changing direction on the diffs of my Bomber? Or maybe moving my Mamba X esc from my Yeti to my SCX10? Tasks that has seemed boring for a long time, but are peanuts compared to modifying the wheel base of a hard plastic body.

It’s summer, and there’s no need to have a guilty conscience for the half finished hobby project that have been staring at you for a long time. While you haven’t worked on it, I am sure lots of other things have been done instead.

PS. If you try this reasoning on your better half and it doesn’t work out quite they way you intended, please don’t tell her where you read it. Blame the brain behind it instead.

To procrastinate whatever you need to do a bit more, why not read another column?