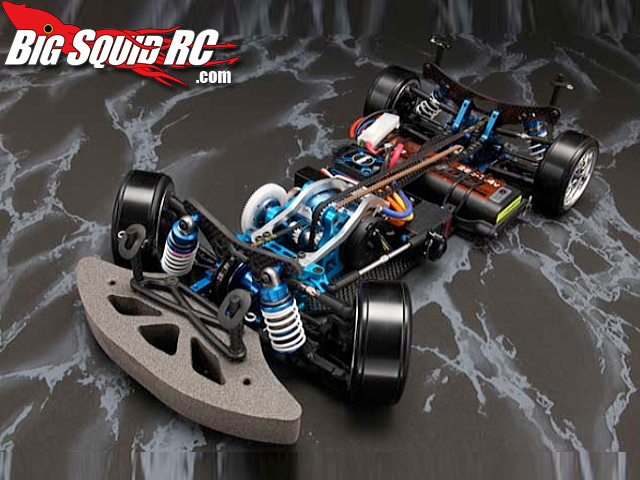 Losing grip – once upon a time

Doug was certainly the right man to sum up the last decade in regards to RC monster trucks. I certainly don’t have the historical perspective on RC drifting, that he has on solid axle monsters – from a historical perspective I pretty much just got into it. Luckily, for it saved me a lot of trouble not having to go through all the radical changes this niche of the hobby has seen.

If you’re lucky you might one day stumble upon someone very old, someone ancient and venerable, who might share with you how he first got into drifting, ages and ages ago. He will tell you how back when the earth was flat and dinosaurs roamed the outskirts of Chicago, the knuckle-dragging humans of the time had to manufacture their own wheels from plastic piping. Some even used duct tape, on rubber wheels, for the same effect.

– Dad, is this really  true? You have that funny look on your face…
– Sure it’s true, son. I heard it from a mate, who got it from his buddy, who… Anyway, now shut up and listen.

Plastic wheels it was, grip was lost, and RC drifting was born. The beasts that carried these wheels were 4-wheel drive on road cars, but before long the movement had gained enough traction – sorry, momentum – for manufacturers to start showing interest. It was a time when legends were born, names that will never be forgotten. TT-01. Sakura D4. HPI Sprint.

– Dad, I think you’re getting the some release dates wrong, and you forgot a few important names too.
– Respect, son! Don’t question your betters!

Cars that previously used to go in the direction their headlights were pointing, would now go sideways instead. Speed was not a thing anymore, instead everything was about style. Precision. Skill. Drift44 springs to mind, as a hero among drifters. He took it to Youtube, like no one else ever had. In fact, he even took drifting to Super Bowl, where tens of thousands of people cheered him as he entered the arena, transmitter at the ready.

– Dad, I think you’re getting this part of the story wrong. It was a TV commercial.
– What’s the difference, son? Objective truths and facts are a thing of the past. Please let me got on with the story! Now, where was I…

Drift44 it was, and 4-wheel drives with plastic wheels. Well, things changed. The wheels stayed plastic, and cars remained 4-wheel drive. But then someone realised that since the cars were belt driven, drive ratios could be changed, and hence power moved to the rear wheels. It was as simple, as it was brilliant. 30% at the front, 70% at the rear was a common setup. With more power at the rear, RC drifting started to look more like the real thing. All was good, except for…

– Yes, dad, I know. You’ve thrown a tantrum over this a thousand times. Some nutcase decided to call it ”countersteer” and that dude ought to have a price on his head, and so on, and so forth. Could you just let it go for once, dad? Please?
– Well, sure, son. But if ever a term caused confusion…
– Dad, please?

Well, yes, forgive and forget, right? Anyway, with the ridiculously named countersteer setup, things really started heading to where we are today. The inevitable end point of more power moving to the rear wheels, was of course all power moving to the rear wheels. RC drifting went rear wheel drive. At this point, things were confused, with AWD, countersteer and RWD all being around at the same time. Arguments were heated, but the trajectory was not to be changed.  The course was set. RWD had come to stay.

– Dad, that’s weird? Can you really hold a set course with an RWD?
– Are you joking, or being disrespectful? Watch your mouth, son. Anyway, good point.

With RWD, gyros entered RC drifting. Driving a RWD drift car without one, is just about impossible. A gyro could emulate the feeling of a real car, which tries to straighten out as you drive – it naturally countersteers due to front wheel traction, in a way that a RC car never could. To this day, primitives can be found that believe a gyro is cheating, but they represent a confused minority that is sure to perish in the coming decade. In short, RWD and gyros made RC drifting more realistic than ever before.

– Sort  of like the scale movement in crawling, dad?
– Indeed, son. Except that the scale movement in drifting is miles ahead.
– That’s because drifters are smarter, right, dad?
– True that. And better looking.
– Richer as well, since they don’t tend to break stuff. Right, dad?
– That, too. You’re a quick learner, son.
– Smarter, better looking, and better off. What’s not to like about RC drifting, dad?
– Spot on, son. What’s not to like about RC drifting?

Happy new year, folks! Why don’t you click the link to read another column?