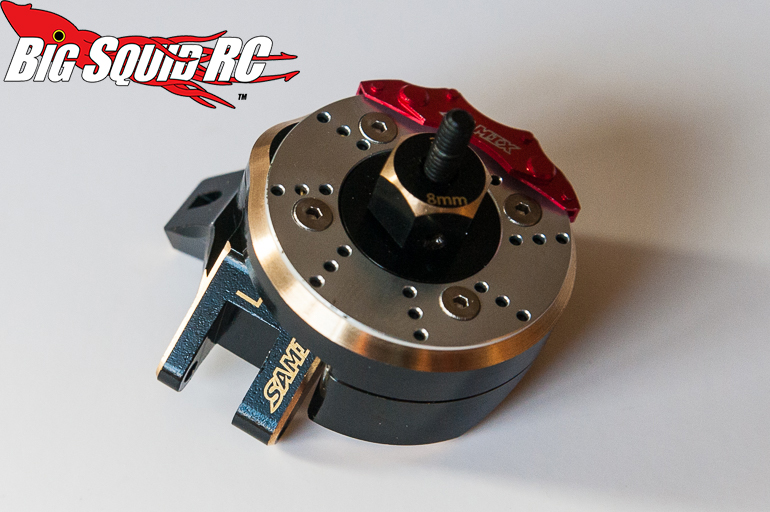 It is well known that a low center of gravity improves crawling performance, by making a car less prone to tipping over. A forward weight bias improves climbing ability for the very same reason, and that’s why manufacturers compete to have the motor mounted as far forward, and as far down as possible. A wider car also makes it less prone to tipping. Two factors to play with then: center of gravity and width. I will do both. My Axial SCX10-3 will be up against a heavily upgraded Axial Bomber on the trails, and I don’t want it to fall too far behind. Electronics are top notch, so the main area of improvement is in moving the center of gravity farther down, and widening the stance.

The cheapest way of improving (as in lowering) the center of gravity is to remove unnecessary weight situated above it, like for example the roll cage and interior of the Axial SCX10, or the roof rack of the Traxxas TRX-4 Defender. The roll cage of the SCX10-3 weighs just below 70 gram and sits very high up, so it will make a difference.

The other way of improving the center of gravity – involving money, but more effective – is to add weight down low. The lower the better, the lowest point possible being the wheel axles. In order to add weight right around the wheel axles, there are a couple of options: heavier wheels, internal wheel weights added to the wheels, or portal covers and knuckles. To be precise, knuckles extend a bit above the wheel axle (the very point of portal axles, right?), but they are one of the lowest situated components of the car. Brass weighs more than three times more than aluminum, and there are quite a few manufacturers out there doing brass upgrades. The basic idea being the same, they still differ quite a bit in weight. The heaviest weighing more than four times as much as the lightest ones (not counting aluminum options): 88 vs 20 grams.

I’ve said it before: I hate buying twice, better to go for something really good from the start. In the case of portal covers and knuckles, that means both heavy and good looking: 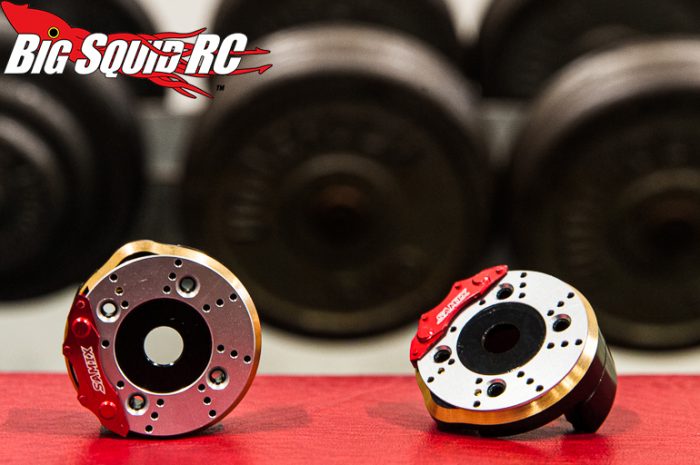 I have had a thorough look at the market, and there are no brass portal covers that look really scale. Not surprising, considering that real cars don’t use brass components. If you’re big into scale realism, LockedupRC offers a pair of beautiful covers in steel that you should have a look at. On the other side of the spectrum, you’ll find uncolored brass covers, shiny as, well, brass. They might add weight, but I find them just too eye-catching. That’s why I was happy to find the beautiful covers and knuckles from SamixRC. They are not only the heaviest out there, but also (in my opinion) the best looking ones, especially when coupled with their scale brake rotor and caliper. Mainly black, with brass colored beveled edges, beautifully finished. 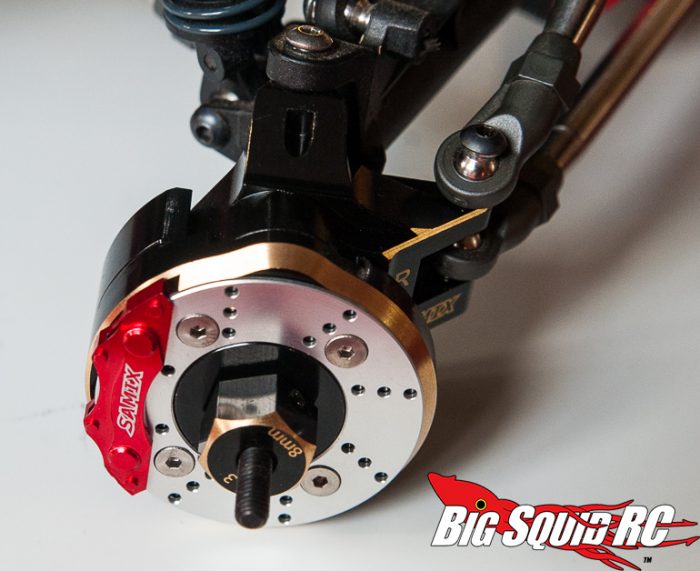 They cost a bit more than most of the competition, but that is easily justified by their weight and finish. In addition, there is an optional tuning weight, so you can choose between adding 55 or 88 gram at each portal, excluding knuckles. 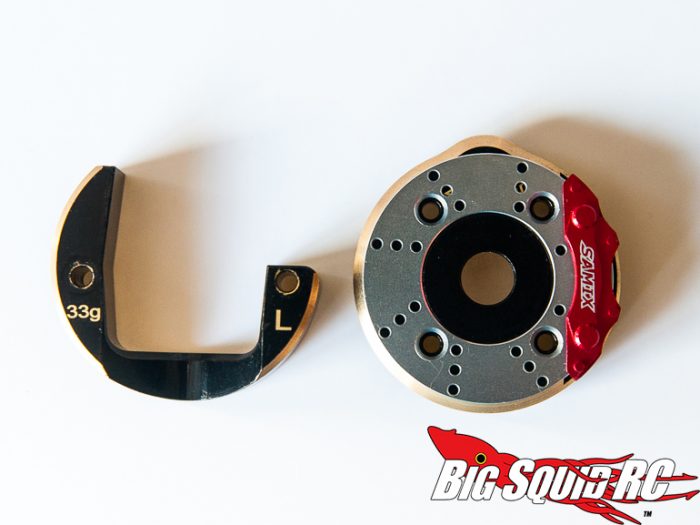 Samix RC offers their accessories in a lot of different packages. I got myself the full combo: a package including brass covers, optional tuning weights, 8mm hexes, scale brake rotors and knuckles. My idea was to put the knuckles in front, and the portal covers at the rear. However, as soon as the package arrived and I had had a look, I put in an order for a complete kit for the rear axle as well. They were just too good looking not to. All in all, it adds just over 500 grams (1.1 pounds), once the plastic knuckles and portals are removed. That’s 15% of the total weight of my SCX10 (a lot!), or half the difference between the best and the second best deadlifts ever (significant!)

But what difference does this weight actually make? As I wrote in my last column, I am looking for increased side-hilling and climbing ability. I actually did an objective measurement of this, simply using a board covered by asphalt roof shingle for really good grip, and a camera tripod to adjust the angle of it. To check theoretical side-hilling, I put the car on the board, and gradually increased the angle of it, until the car tipped over. For climbing, I drove the car up the board, again gradually increasing the angle of it. Simple, but effective: 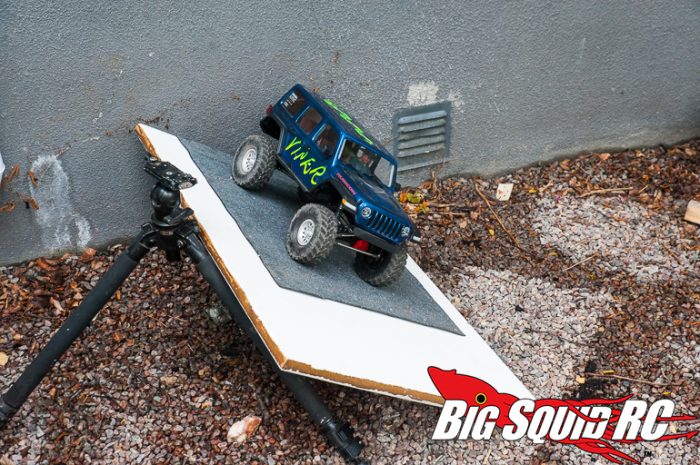 In the original configuration, I measured side-hilling capacity to 37 degrees. At 37 degrees, the car would roll over after fifteen seconds or so, due to the foams slowly folding under the weight, as you can see here: 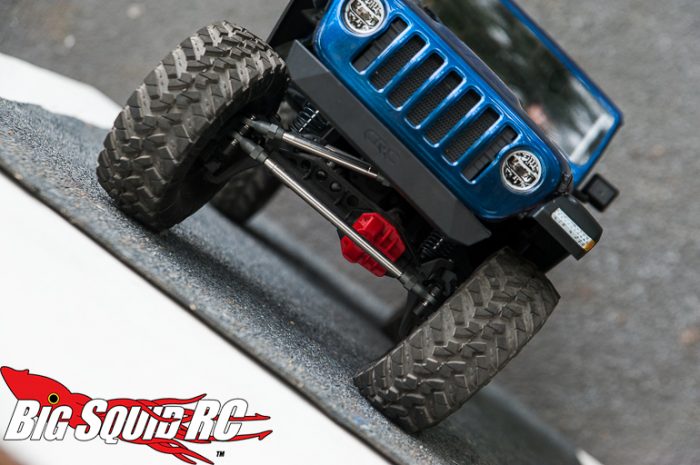 That means that you can drive it carefully at this angle, but not park it and have a cup of coffee. I managed to climb an incline of 47 degrees, any more than that and the car would flip over backwards and land on its roof. Problem being weight distribution.

Just over an hour of wrenching, including frequent stops for photographs, and the brass from Samix was installed and new measurements made. Side-hilling capability increased to 42 degrees. This might not sound like much, but when you actually look at it, it is a noticeable difference. At this angle and due to the heavier total weight, even more pressure was put on the foams and body roll became more apparent. The compression of the foams was roughly neutralized by the wider stance; i.e. the base of support remained about the same. Honestly, I didn’t measure, but it’s a fair guesstimation. This means that with some good dual-stage foams, there’s more to gain.

Climbing increased to an impressive 56 degrees, a very clear difference. That’s a very steep slope, you would have to crawl up it! In the picture following, the car is parked at the bottom of the ramp, simply because I didn’t manage to drive it and photograph at the same time. But it did climb that slope! 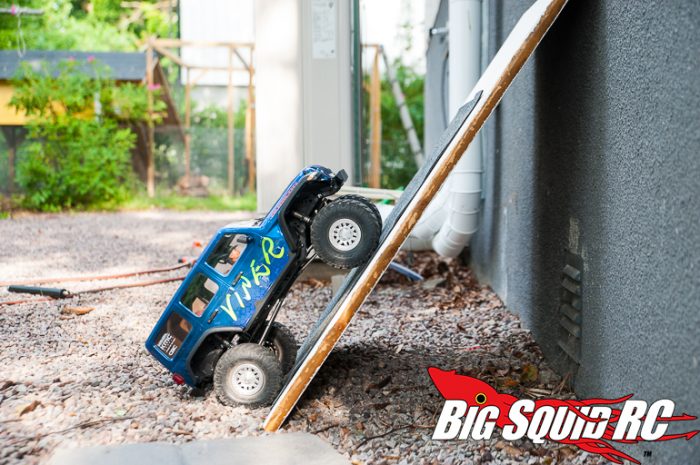 What’s interesting here, is that the limiting factor wasn’t weight distribution anymore, but grip – the opposite of before. The car didn’t show any tendency to flip backwards (unless I accelerated too hard), but it simply didn’t get the traction it needed to climb any steeper. With better tires, 60 degrees and maybe more is feasible.

That’s the objective measurements done, what about real life crawling capability? I checked this by hitting some gnarly spots of my usual terrain, photographing and making notes of what lines I managed before and after. The granite rocks I crawl on are partially covered in lichen, meaning that they mostly provide a very good grip, but with very slippery patches. From a crawling perspective, this can be very challenging, demanding very precise lines to be navigated.

I was impressed by the crawling ability of the SCX10-3 from the start, but the added weight of Samix’s brass upgrades really did make a difference. The rocks in the picture below are way harder to climb than they look, due to unfortunate angles, steps and patches of lichen. 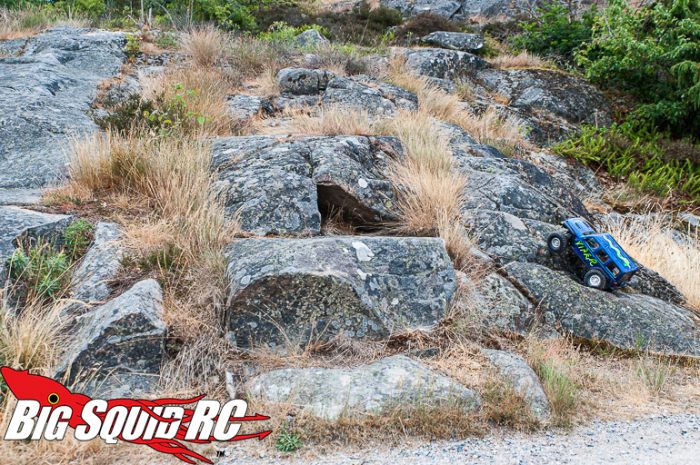 Before the brass upgrades, I managed to find exactly one line up this section, and a very difficult line at that. In the following picture, you can see how the car sits at an angle of more than 45 degrees, rear suspension heavily compressed, front wheel lifting off the ground. Only just manageable, with a lot of wheel spinning and after several tries involving numerous back flips. 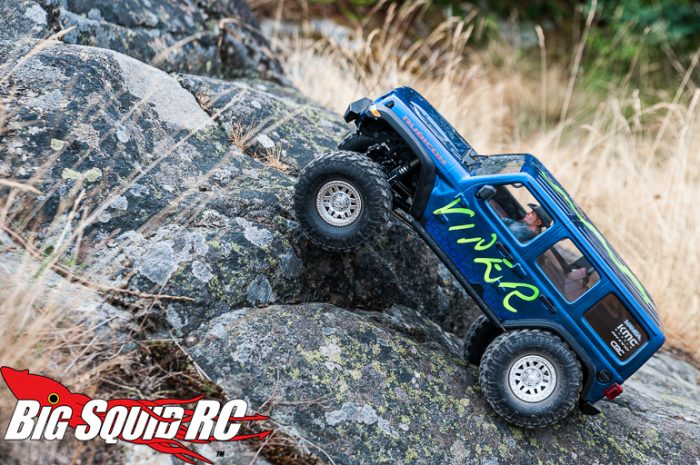 With the extra weight of the brass, I was able to power through some steep inclines without back flipping. Sections that were undoable before, were possible to solve, and I dared tackle a few new lines, like the one below. A narrow ledge, followed by a steep climb, with a six feet fall waiting. More than half a pound of brass make the difference! 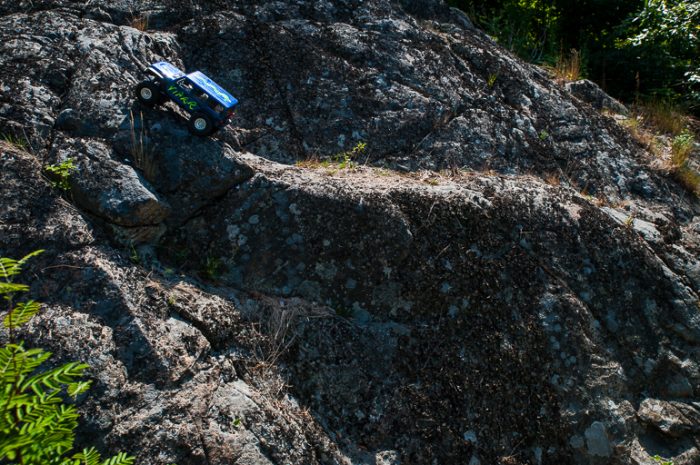 The rear suspension still bottomed out though, the suspended weight above the axles being the same as before. In addition to better foams, I might get myself some stiffer springs for the rear. 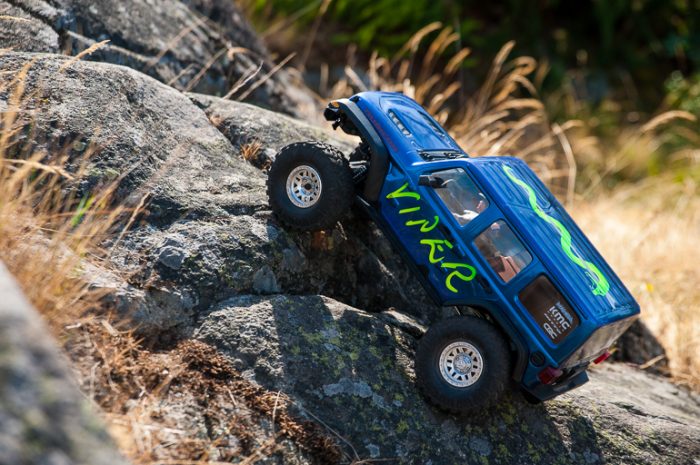 The brass portal covers and knuckles from SamixRC not only look good, but also make a significant improvement in crawling ability. If you are on a tight budget, you might want to start by removing the cage and getting some good dual stage foams, perhaps also better tires. It would make sense to do this first, but the foams I want haven’t been available for quite some time. However, if you want to take your SCX10-3 as far as you can, you should definitely consider Samix RC’s brass portal covers and knuckled. Measured side-hilling and climbing ability was improved from 37 to 42 and from 47 to 56 degrees respectively. Actual crawling performance was markedly improved, the rig becoming a lot more planted to the ground, less prone to tipping and flipping. Grip became the limiting factor, not weight distribution any more.

Sure, there are cheaper options, but then you have to compromise both on looks and weight. I didn’t want to do either. Bite the bullet, by once, be happy. As long as your motor and ESC can handle it (they probably can), I can see no reason to skimp on the mass. You get the most bang for the buck by getting the full portal cover combo, add knuckles if you want to go all in.

Next up for me will be better tires (I have a set of RC4WD Goodyear Wrangler waiting to be mounted), foams and wheels (a set of Vanquish Methods has been on their way for 45 days now…). Maybe some suspension tuning as well, stiffening up the rear. We’ll see. For now, I am very happy with how much difference a pound of brass and an hour of wrenching did. Keep it simple, stupid! Highly recommended! Samix RC has lots of upgrade parts for other vehicles as well, check them out!

Now hit the link to read another column.