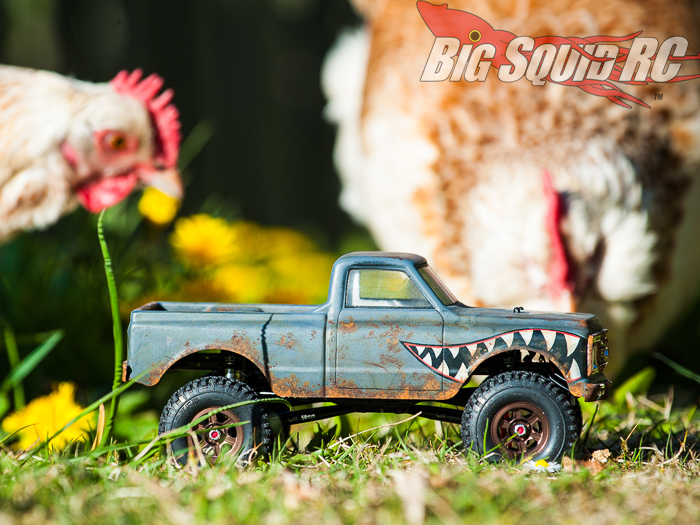 I called it! Sort of. But I am surprised that Losi was the one to fill in the blank. Surprised, but not disappointed, seing how Doug seems to be absolutely in love with their LMT. There was an IFS-shaped hole in reality, now it is gone, and the RC fauna is better off for it.

I haven’t had the time to watch any review videos about it, so I don’t really know the general opinion out there. By just having a look at it, I am pretty sure the general opinion will be that it is awesome, has a tendency to roll over in corners and needs a better servo. The servo issue is pretty much a given, since so far there’s hardly an RTR out there that comes with a really strong servo from the factory, and a truck like this one is going to need plenty of force to turn those wheels among the rocks. Rolling over? Well, it’s pretty narrow and has a solid rear axle, so yes, if you go hard in the corners it will.

Mind, this is only speculation. But even if it was true, it would not stand in the way of me getting a Hammer Rey. Actually, this might very well be my next buy, I think it would complement my Axial Bomber nicely. Either this one, or the LMT for something completely different from my other rigs. We’ll see, long time readers know that I am way better at speculating on what to buy, than actually procuring stuff. A syndrome that tends to go with a limited budget.

Speaking of small budgets, this is probably one of the reasons why there’s a zillion upgrades for the tiny SCX24 out there. A quick look on Treal’s homepage reveals that they alone are offering forty-one items for the truck, ranging from overdrive differential gears, to aluminum axles. Samix RC has twenty-five bits and bobs, and then we’ve got Injora, Hot Racing, Yeah Racing, and so on, and so on. The nice part is that upgrades are relatively cheap, compared to upgrades for 10-scale trucks, not to mention for the SCX6.

Luckily, there’s fun to have and things to do even when money is lacking. Like driving what one already has. Like calling out the chooks, grabbing a car and enjoying the spring.

To read another column, hit the link. Or drop me a line: martin at bigsquidrc.com