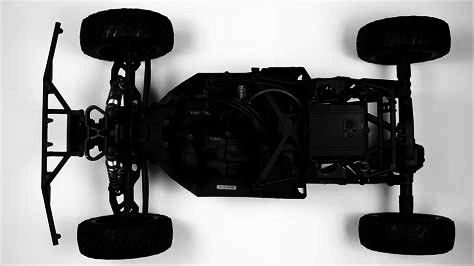 Last column I pondered what (my) children want and expect from a good RC car: durability, capability, good looks and donuts. Now I find myself trying to apply their wishes to my own desires for my next build. I am starting to feel the itch to go on a diet of noodles and stale bread, in order to save up for another kit build. Considering that I am not a big fan of neither noodles nor stale bread, whatever I get has better be worth it.

I want a fun, all-round trail truck. In addition to my children’s expectations, it should be capable of a twenty to forty mile trekk on a wide variety of terrain – a subject in its own right. A jack of all trades, master of none.

Options are certainly plentiful, there’s so many 1:10 crawlers out there it’s impossible to keep track of them all. Axial, Cross RC, Element RC, Gmade, MST, RC4WD, SSD, Tamiya, Traxxas and Vanquish – all of them have something on offer. This is only counting kits, were I to consider an RTR another couple of brands would have to be added to the list. RTR might actually be the way to go, depending on weather, lunar phase, relative humidity, Mars’ position in relation to Jupiter, and whether I am hungry or not. Also, there is one specific vehicle, differing from the mainstream, not available as a kit: the Losi Lasernut. The offspring of a race buggy and the Rock Rey it seems. Anyway, as I eat my stale bread, I will try to keep an open mind upon looking at options.

Today, I won’t delve deep into the options available. What intrigues me is that one option is notably absent. Currently, there is no 2.2″ IFS rig on the market. No car with 2.2″ wheels, independent front suspension and trailing arms with a straight axle at the rear. Once there was the Axial Yeti. Then came the Losi Rock Rey. Now both are gone. Well, the Losi 1/6 Super Rock Rey is still here, but beyond my budget.

Let me state it again: there is a peculiar hole in the RC universe, and it is the precise size of a 2.2″ IFS car. I can see why the Yeti was discontinued a couple of years ago. Horizon bought Axial (right?), which meant that they suddenly had two similar horses in the stables. The Rock Rey was the better one of them, therefore the Yeti had to go. Not that I have driven the Losi Rock Rey, but word has it, it is a better setup.

I like my Axial Yeti, but it did come with a couple of problems. First, it was supposedly not very durable. I have never experienced this, since I built mine with plenty of upgrades from the start: SSD aluminum rear axle, STRC hubs and knuckles, RPM A-arms that I sleeved with aluminum tubing. Second, it can’t turn. Seriously, the turning radius is ridiculously large, especially with the heavier weight oil that is needed in the diffs for crawling. On loose ground, this is easily overcome with a bit of extra throttle input, but on the rocks it is debilitating. There was a few of fixes out there, one of them replacing the entire front end (bulkhead, differential, A-arms, the lot) with that from a Traxxas Slash! Not cheap.

But that’s all history now. Anyway, my point is that a 2.2″ IFS setup could be the most flexible and best all round performer possible. Imagine one with a lockable front differential! Lock it, and it would be a capable crawler, unlocked it could be a fun awesome basher. Sure, it would flip over more easily than a car with independent suspension all around, like the Lasernut, but not half as easily as a solid axle rig. A true jack of all trades.

I am sincerely hoping that someone out there is working on this right now. How I would love it if on of the Big Ones picked up this ball!

PS. There’s another hole out there as well, this one in Traxxas line up: a 1/24 crawler. It might be hard to remember, but the TRX-4 once was a huge surprise. When will we see them do a smaller version?