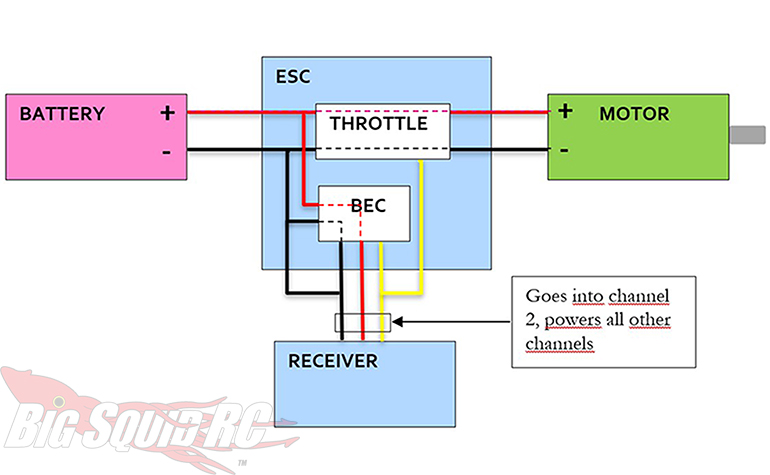 Losing grip – To BEC or not to BEC?

An external BEC is a nifty little device that I recently realised I use too often. Maybe you do as well? My Bomber, Yeti and SCX10III all have one, added by way of default thinking as I was setting up the electronics on them. I had read that it’s a good thing, and so added one to every car without fully understanding why.

Let me start with the very basics. A BEC, Battery Eliminator Circuit, is an electronic voltage regulator that lets you run two parallel systems at different voltages, using only one battery. What problem does this solve? This: motors can take a lot of volts, but a lot of volts will fry most receivers. The motor can take all the volts the battery can supply it with (well, sort of), but most receivers will be fried if they get more than 6 or 7.4V. Once upon a time, this meant that people would use one battery back for the motor, and a separate battery pack for the receiver. A Battery Eliminator Circuit eliminates the need for this separate battery. Instead of two batteries, we have one battery (say 3S, 11.1V), and a BEC that regulates the voltage sent to the receiver (to for example 6V).

As I understand it, external BECs were originally mainly used in RC planes, for powering the steering servos. That way, if the ESC got smoked during flight the plane could still be controlled and a dead stick landing could be done, since the receiver and steering servos got their power directly from the battery, via the BEC.

Today, just about every ESC on the market comes with an internal BEC. Power goes from the battery into the ESC, where it is divided into two outputs: full on for the motor, and via the internal BEC to the servo cable that we then plug into the receiver. Some ESCs, like the XL-5HV Traxxas puts in their crawlers, also have a separate power lead (the small red one) coming from the BEC, to supply lights and such with the same voltage the receiver gets.

I have had a look into a lot of receiver internal wiring diagrams, and as far as I can see, all the contacts are wired in parallel. Simply put: whatever voltage the ESC’s internal BEC feeds the receiver with, the receiver will pass onto your steering servo. And shift servo, and dig servo, and light system, and whatever else you connect to it. It looks like this: 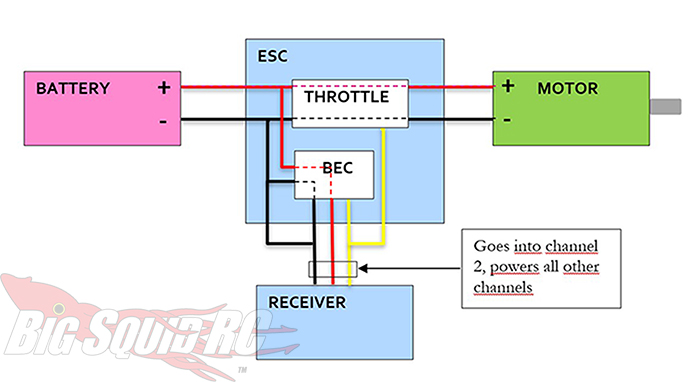 But of course, not all internal BECs are created equal, nor are all receivers or servos. This is where an external BEC might come in handy, or might not be necessary at all. It seems to me that the general opinion is “just add an external BEC and be done with it”. But why, if one is not needed? If you’ve invested in a high end ESC, it is quite likely that its internal BEC will deliver 7.4 or maybe even 8.0V, and a maximum current of 6 or 8A. This is enough all but the most power hungry servos out there.

However, if you’re running the stock ESC of an RTR, it is quite likely that it won’t let a high power servo do its best. This for two reasons: 1) the internal BEC of a cheap ESC usually does not deliver more than 5v or 6V; 2) the internal BEC of a cheap ESC does not deliver as much current as an expensive one. Maximum current is probably in the range of 1-5A.

Dang! Current! That’s one more thing to take into consideration. (have a look here for the very basics on this) A servo moving under little or no load does not draw many amps, so no worries then. It’s when a motor is stalled – not moving even though trying – it reaches its maximum current draw. Like when you have your crawler in a tight spot, or is turning your basher at full throttle. Again, a high end ESC will have a BEC that probably delivers however much the servo can take, a cheap one will not. This is (one of the instances) where an external BEC is a good idea. Of course, the servo could be powered by a battery of its own, but it’s way easier to add an external BEC between the (only) battery and servo instead. Battery eliminator circuit, remember? With one 3S battery, the internal BEC of the ESC and an external BEC, you can then run 11.1v to the motor, keep the receiver happy at 6V, and supply your shiny new steering servo with 7.4V (or more, if needed) and all the amps it will ever need.

There’s more to be said on the subject, but I’ll leave that for another column, perhaps “Two BEC or not to BEC”? Just bear in mind that, contrary to popular opinion, you might not need an external BEC, saving you money and wiring.

PS. Why then this sudden interest in BECs on my part? I’m building a TRX-4 Bronco, and am moving electronics around between my crawlers. Also, I’m adding a lot of accessories that Club5Racing supplied me with to the Bronco. I’ll go into more details on those soon, but suffice to say for now is that so far I’m very happy. Lots of details, lots of lights. Nice!