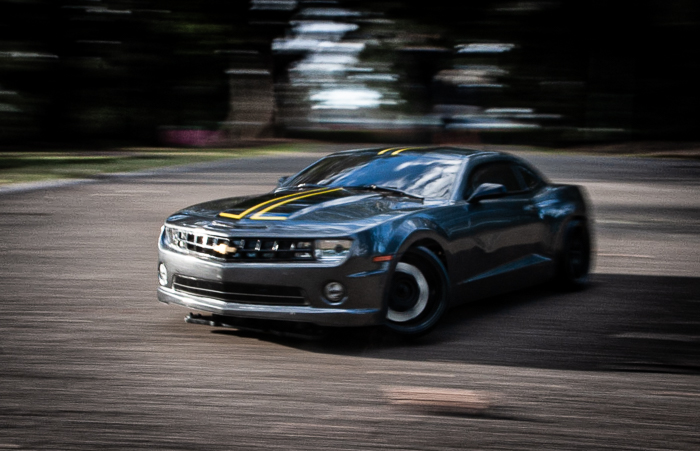 The very first time I pulled the trigger on a drift car, on the linoleum floor of the kitchen, I did nothing but donuts. Smaller and smaller donuts. In a way it was very practical, because the car didn’t need more than ten square feet of floor space, but in the long run endless donuts gets a bit monotonous. Something needed to be done.

A gyro is a clever contraption, used in a large variety of devices (like your smartphone) to measure or maintain orientation and angular velocity. I guess you could say that they work like an apostle of Newton’s first law, which states that a moving object will keep on travelling in its original direction, unless acted upon by an external force. A soccer ball travelling straight towards the goal will score, unless someone deflects it with a well aimed kick. A hungry teenager will move straight towards the fridge, unless intercepted by a vigilant mother (the father was once a hungry teenager himself, so will give some more leeway). You get the idea.

What does all this mean? Imagine that you’re going WFO towards a block of concrete, and since you’re not doing BSRC durability testing, you want to avoid it. You therefore turn the wheels left, and the car angles towards the left. However, due to inertia and low friction (get those Pro-Line Badlands or Hyraxes!), the car itself keeps on travelling towards the concrete block. Had you been going slower and had better tires, the car would moved towards the left in a turn. But you were not, and therefore Newton looms over you and laughs as the car keeps on going in the original trajectory, but now at angle. The rear wheels are pointing towards the left, but are actually still travelling straight – they have lost grip and the car goes into a spin. In technical terms, the rear wheels got introduced to a slip angle: there is an angle between the direction the wheels are pointing, and the direction they are travelling.

Wham! The car hits the concrete block at an awkward angle, and if it was an Arrma Kraton you just have another go. Same thing it it was a drift car, because 1) they are not very fast, and 2) they are light weigth, so no great forces involved.

It’s the second run, and while you still want to avoid the concrete block, you also want to do it in a cool manner. Your mates laughed at you, now it’s time to show them how things should be done!

However, since you don’t have jedi reflexes, the countersteer comes too late, the car spins out of control, and once again that infernal concrete wins the argument. Time to enlist the help of a gyro.

The third run, you turn towards the left just as before, but as soon as the rear starts to move out towards the right, the gyro senses the rotational movement of the car. Since it wants to maintain the original orientation – it doesn’t want the car to turn to the left – it immediately overrides your steering input and turns the front wheels towards the right. This happens in the blink of an eye. All of a sudden, the front wheels are pointing in the direction of travel (no slip angle), while the rear wheels point towards the left (large slip angle). The spin has been counteracted. Now, by increasing the throttle just the right amount, the rear wheels – that are pointing towards the left – push the car towards the left. You make a sweeping drift turn, narrowly missing the concrete. Covering it in dirt, were you driving a short course truck, or just looking cool if you were driving a drifter. Your mates cheer, you smile confidently.

Again, that’s what a gyro does: it detects and counteracts the rotation you introduce when you turn the steering wheel. When the car starts to rotate, it turns the wheels in the opposite directon in order to maintain the original trajectory. And it does this way, way faster than a human being ever could. For RWD drifting, it’s an absolute necessity. But no, it does not drive the car for you.

However, if the gyro output is reversed, it will still detect the rotational movement, but turn the wheels even more in the original direction: doing ever smaller circles. After a bit of thinking I realised this was why I wasn’t doing anything but donuts on the kitchen floor, flicked a switch on they gyro and started my (very humble) drifting career in earnest.

No drift blog with any self respect can do without trying to explain how a gyro works, or withouth mentioning slip angles at some point. Some by being very technical, me by telling stories. At this particular corner of the internet, self respect has now been preserved. Until next time: keep losing it!