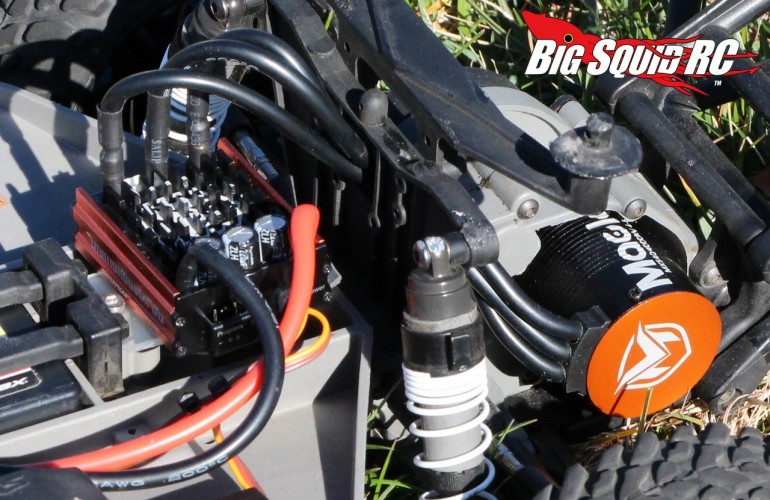 A few weeks ago we had the chance to review one of the new 550 brushless systems from Maclan Racing. Maclan is new on the brushless scene, but we were left very impressed. Recently we also got a chance to test one of their Diamond MX 540 Systems. The 540 is intended for use in 10th scale 2wd vehicles like a Slash, a T5, a touring car, or a wide variety of other vehicles. How much power does the Maclan put out? Can you jump it off a roof and not break it? Does it put out usable power? Read on for the scoop…

Set-Up Notes: We ran the Maclan in a pretty typical vehicle, a 2wd Traxxas Slash. The rest of the truck was stock with the exception of using two different radio systems in addition to the stock radio. We used a Futaba 4PX as well as a Spektrum DX4S during our review. The stock Deans plug was retained and we used a wide variety of 2S & 3S LiPos during testing.

Ease Of Use: The Maclan 540 system was extremely easy to install and set-up. A Deans connector came pre-soldered on the power wires and the motor wires also came with pre-soldered bullet plugs. Calibration was easily done with various transmitters, although we did have to update software before calibration with the Spektrum. While not included, we did make adjustments with the Maclan Prolink programmer, which was also very easy to use.

Power: It rips, no question about it. Our Slash was previously equipped with a Traxxas Velineon VXL powerplant and we could definitely tell the Maclan had more rip in the mid-range with more speed on the top end. While driving the Maclan provided insane burnouts on dirt/pavement/grass and had more than enough yank to get over the biggest jumps at our local track. And that was on 2S. On 3S, like most good brushless systems, it really turned into a beast, nearly ripping the tires off our Slash.

How It Drives: While a bit rough from a dead stop, the Maclan had a smooth progression of power through its mid-range and into its top-end. There were no unexpected hits of power, just plenty of raw wattage that smoothly ramped up as you pulled the trigger deeper.

Downsides: Our test crew couldn’t find many faults with the Maclan system. It didn’t have the smoothest power from a dead stop, but otherwise it was a beast.

Durability: Yes, we are BigSquidRC, therefore you know we subjected the Maclan system to all sorts of ugliness. It had plenty of high g impacts (like roof jumps and curb hits), plenty of long runs on 3S packs, and we hit it with plenty of water. After all was said and done, the Maclan performed just as well at the end testing as it did at the beginning.

Final Verdict: We were very impressed with the Maclan Diamondback Brushless Combo. For a system with a street price of under $120, it proved that it could put out crazy power while living through the rigors of a good hard bashing.