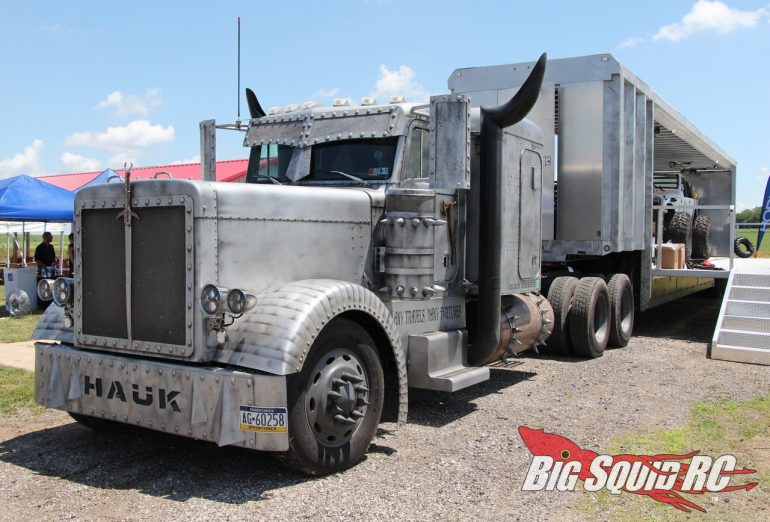 As part of our ongoing show coverage from the 2018 Horizon Hobby RC Fest, we have to talk about the numerous manufacturers that were on hand. A bunch of different rc companies made their way to Eli Field in Monticello, Illinois to show off their latest products, plus they put on some really cool special events.

The crew from Pro-Line Racing went big at RC Fest by putting on side-by-side scale monster truck racing, plus they held an amazing parade of lights on Saturday night. The monster truck racing was off the chain all weekend, while the scale parade was a great chance for hobbyists to showcase their extensive LED light upgrades. By the way, the crowd might have enjoyed the parade of lights as much (or more!) than the participants. Also, Paul and Robert from Pro-Line did an amazing job of answering questions all weekend long.

Pit Bull Tires brought their totally customized 18 wheeler to RC Fest and also hosted a crawling event along with Brian Parker from the RECON G6 scale adventure series. The guys from Pit Bull did a great job of promoting the hobby all weekend long and exposed a lot of new people to some very cool aspects of the scale/crawling community.

The folks from Venom were VERY busy all weekend. Why was that? Because they set up a giant battery charging station and were charging anyone and everyone’s packs for free all weekend long. How awesome is that? Needless to say the Venom booth got a lot of traffic from both surface and air hobbyists all weekend long.

If you are a hardcore basher then we don’t need to introduce Castle Creations to you. Castle had a booth at RC Fest filled with all their latest power upgrades for both air and surface. To help kick things up a notch at the show, Castle also sponsored a speed run contest that took place on both Saturday and Sunday. Inside their booth people were checking out their new B Link wireless Bluetooth adapter, as well as their latest air speed controllers.

Making the long trip out from California to support the show was Tamiya. While Cubby loves to rant about some of their re-releases, we have to say that they look amazing in person. If you have not checked out some of the latest releases from Tamiya, the re-releases look incredible, and their newer designs are really impressive as well.

All in all, the rc manufacturers that came out to support RC Fest did a great job of promoting the hobby to the masses. Better still, many hosted special events so that current hobbyists could show off their cars and driving skills!

Check out This Link for more RC Fest coverage on BigSquidRC.