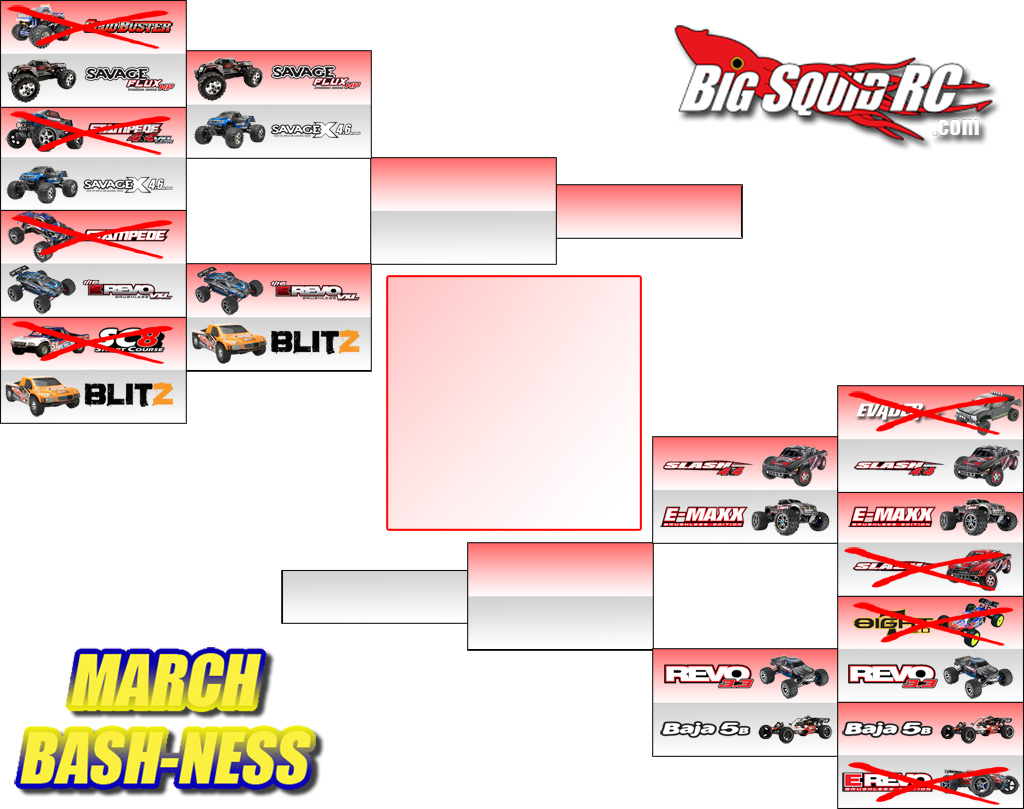 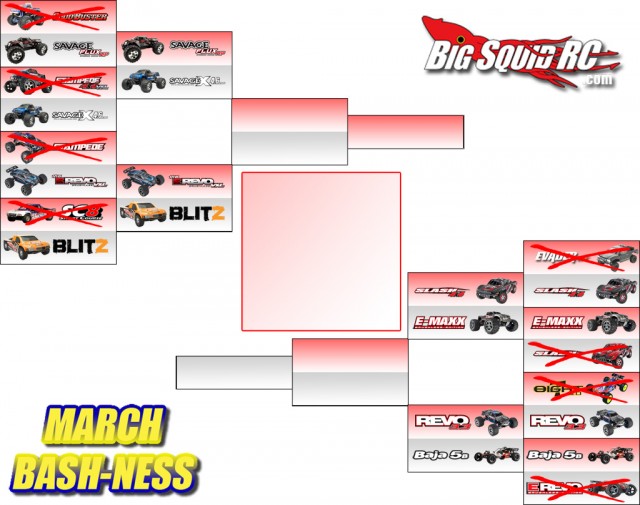 [Update: Voting for Round 2 has now closed.  Round 3 voting is open!]

March Bash-ness round one is done, the winners have moved on and the losers have gone home. To recap the first round of voting, the young and spry Savage Flux handily trounced the great-grandfather of monster trucks, the Clod Buster. The Stampede 4×4 VXL and Savage X 4.6 battled back and forth, with the Savage X just squeaking by at the end in the closest of all first round battles. The little 1/16 E-Revo VXL beat up on it’s bigger, older sibling, the Stampede 2wd, and took the victory by a respectable margin. HPI’s Blitz went up against a much larger opponent in the SC8, but even the SC8’s roll cage couldn’t protect if from the whooping the Blitz delivered. Slash 4×4 vs. Evader DT… what can I say? The Slash 4×4 got a clean knockout early in the round and sent the diminutive desert truck packing. The E-Maxx Brushless Edition took on the father of R/C short course, the Slash, and wound up taking the victory, but just barely. The 8ight T 2.0 and Revo 3.3, in a battle of race-bred machines, the results were much closer than the numbers might indicate, but the Revo powered on and the 8ight T drove home. The final battle, the E-Revo and Baja 5B, was the most hard fought, with the 5B eventually taking the victory after a full day of back and forth tug-of-war.

The second round will see a Nitro versus Brushless battle between two big monsters, the Savage Flux HP and Savage X 4.6. A battle of the ages. The next match sees another faceoff between industry giants HPI Racing and Traxxas, with HPI’s master of the short course, the Blitz, taking on the small in stature but big in heart 1/16 E-Revo VXL. The third match pits two more members of the Traxxas family against each other, with the Slash 4×4 avenging it’s father’s loss against the electric monster E-Maxx Brushless. And the final match of Round 2 is the Revo 3.3 vs. the Baja 5B, it’s sure to be another epic battle between two much loved and respected vehicles.

This round of voting will go until March 26th 11:59pm CDT. Then come back Sunday for round three, the Final Last Four, which will be open from the morning of March 27th, until one minute before midnight on the 28th. The absolute final round, the big showdown, the great faceoff, will take place on March 29th and 30th. The winner will be crowned March 31st. And the giveaway will happen a couple days after that. What are we giving away? Well, you’ll just have to come back and see. But for now, if you’re on our home page, click the Read More button to vote, if not, scroll down and get on with the voting!

Vote for one vehicle in each battle.