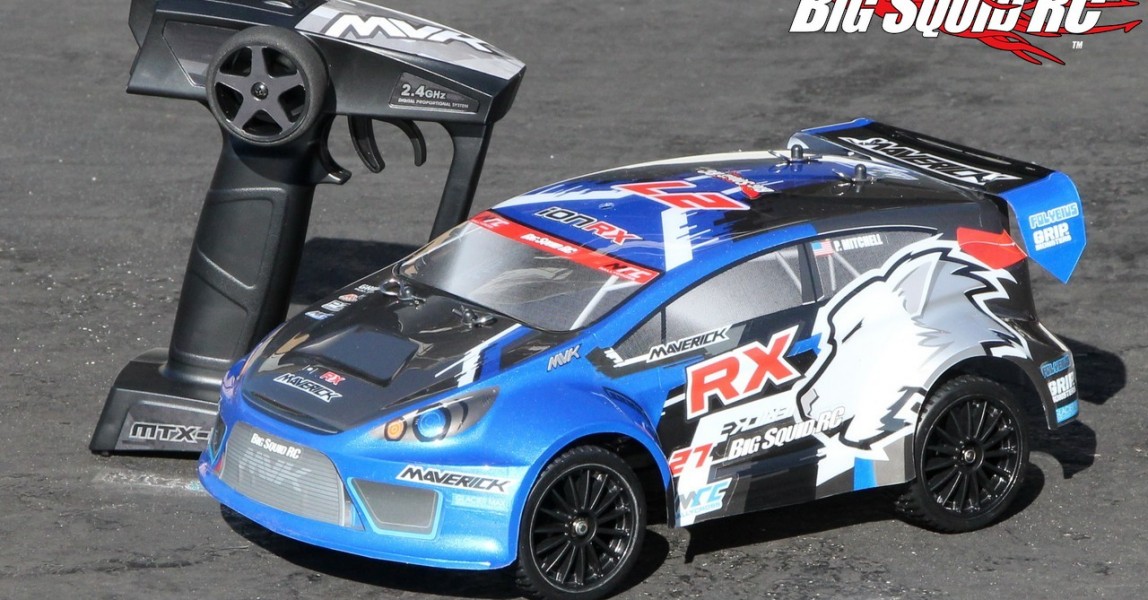 In case you have not heard, there is a new line of cars called Maverick RC that are about to invade U.S. shores. Maverick RC was launched in Europe by HPI Racing about 7 years ago where they built a reputation for having some pretty solid bash vehicles. Recently we had the opportunity to lay our dirt stained hands on the Maverick iON RX 1/18th Scale Rally Car, one of the first cars that will launch in the United States. The iON RX is an entry level RTR that features a 4wd drivetrain and brushed power system. How does the Maverick stack up in the highly competitive 1/18th class? How much power does it have? Does it break easily? Is the Maverick line going to do well in America? Read on to find out…

What’s Needed To Complete: Not much at all, just grab four AA batteries for the transmitter and you are dialed.

Build Quality: Our Bash Crew couldn’t find any build problems on the iON. The tires were well glued, the shocks weren’t leaking, the screws were dialed, and the gear mesh was in the ballpark.

Test Venues: Unfortunately, our local area has been getting crushed by record flooding, which has really affected where we can bash. However, we did manage to get in some time at Arnold City Park, a backyard, and our CostCo parking lot.

Set-up Notes: Stock, stock, and more stock. We didn’t change anything for the test, but did use a Hitec X2 AC Pro for charging duties.

Turning: Like many 18th scalers, the iON RX was ultra sensitive to wheel input at corner entry. What that does is make the car hard to drive. In a straight line the smallest initial input to the wheel yields a lot of steering, thus making the car difficult to drive in a straight line. In corners, we found it best to lay off the gas while turning. When staying off the gas, the car turned well, but if you pound the trigger mid-corner the car would want to spin out.

Jumping: The iON RX did a good job handling airtime for a rally car. Those large’ish rally car bodies like to catch air on windy days, but our test car generally flew quite well. Its soft suspension tended to bottom out when landing larger jumps, but overall the iON was a solid jumper.

Bumps/Whoops: Hey, the RX is a rally car, what do you expect when pounding 3″ tall whoops? Yes, the low slung body of the RX works against it in the rough, but it was more than up to the task of normal bumps/ruts/potholes on pavement.

On-Road: This is where the iON RX really shines. We had a great time drifting/bashing/driving the RX in our local Costco parking lot. While the steering was a but touchy, we could easily drift the car on slicker surfaces, and it had enough power to keep us interested.

Grass: Because of its small 1/18th scale stature, the RX wasn’t much of a grass machine. Yes, we did drive it in grass, but only in the shortest that we could find. Grass with much height at all resulted in the car getting stuck, so if you are looking for a machine that will only be driven in your big green backyard, you will want to pass on the RX.

Tires: The rally inspired tires did a decent job on a variety of surfaces. The tires were molded from a fairly hard compound, therefore we noticed very little wear. The tread pattern was essentially a bunch of small knobbies which worked well on every surface that we used them on.

Power: After recruiting a couple of true noobs, we can say that the RX had about the perfect amount of yank for a first time user. The brushed power system definitely doesn’t have the “OMG” yank of brushless, but it had plenty for our noobs. Power is soft off the bottom for easy starts from a dead stop, then ramps up into a nice mid-range before dropping off quickly at a 18 mph top speed. Our seasoned drivers weren’t blow away by its speed but still had fun as the car had enough power for burnouts and for getting some decent air off of ramps.

Radio: The iON comes with a RTR radio that we’ve never tested before, a Maverick MTX-248 2.4GHz unit. Its range was fine for all the driving we did and we did not experience any glitching with it. If you have small hands, like if you are a child or woman, you’ll probably like its ergonomics as the transmitter has a small stature. The wheel is small, the grip is small, even the trigger is small. If you have large hands you’ll find the transmitter quite cramped. While not a deal breaker, it does take some getting used to for large handed fellas, and the lack of space on the transmitter is made even worse in cold conditions while wearing gloves.

Broken Parts: I’m not going to beat around the bush here, our staff pounded the tar out of the iON RX. I mean, how could we not? If Maverick wants to invade the USA, we had to find out if one of their cars could stand up to a good old fashioned American style beating. Which, it certainly did. Now, its relatively slow speed surely helps it to survive most typical crashes, but even after huge hits like a 2 story roof jump, it still drove away unbroken. Eventually, after slamming into just about everything in sight, we did manage to snap a rear hub carrier, but overall we found the Maverick quite tough.

It was pretty cool showing up to the local bash spot with a car that nobody had ever seen before. Seemingly everyone wanted to know more about the mysterious Maverick so we let a bunch of different people get in some wheel time with it. They all walked away with a good impression, noting how agile it drove and how tough it was.

We don’t know if the stock speedo came with an LVC turned on, but it felt like it. An LVC simply isn’t necessary when driving on the included NiMH battery, which is how most noobs will be driving the car.

While the spring rates on the shocks felt about right, the damping is very light. This results in excessive body roll and blowing through the suspension too easily when jumping. After testing, we dropped AE 50 weight oil in the front and 40 in the rear. The thicker oil did wonders for the car’s handling. We also installed thick AE 1/18th pre-load spacers on the front shocks. That did a great job of making the steering less touchy.

The stock body clips are very, very nice. They are large enough to get your hands on (and makes them harder to become lost) and we never did end up bending one, so they are tough too.

The gold anodizing on the shocks is a nice looking touch.

The two motor mount screws on the bottom of the chassis stick out too far. This results in excessive wear and needless friction when the chassis bottoms out.

The front bumper isn’t seen when the body is on but does a great job of helping soak up big hits to the front of the car.

Various people commented on how sharp looking the iON RX was and we had to agree with them. It simply looks good in-hand.

Do we think Maverick is going to do well here the states? Well, our opinion, which is based solely on the iON RX, would have to be a yes. Our test unit was solid, its packaging was top notch, and it looks like Maverick has done a good job previously with their marketing. If the rest of their vehicles are in the same ballpark as the RX, meaning they work well and have reasonable price points, we see no reason why Maverick can’t make a big dent in the basher market here in the states.

Best Mod: As mentioned above, put some heavier oil in the shocks and pre-load spacers on the front shocks to drastically increase the handling (very cheap too!).

Time To Bash: B Nothing unusual here, the Mav was quick and easy to get up and running.

Workability: B The RX used a standard 1/18th layout that was really easy to work on. Phillips scews are standard, but then that is the case with nearly every 18th scaler on the market.

Car Show Rating: A Yes, the Maverick could use more scale detailing like rear view mirrors, a real exhaust tip, etc, but our test crew still loved how it looked. The body shape was nicely done, the graphics on the body were very sharp, and our guys loved the look of the wheel/tire combo.

Bash-A-Bility: B All of our testing was done in relatively cold temps ranging from 55 degrees Fahrenheit down to around 25. Even with the cold temps our test iON RX still held up well. Yes indeed, it can take a good beating with nearly no broken parts.

Fun Factor: B The RX doesn’t have “crazy power” on tap, but it is a lot of fun to drive on-road and on prepped dirt surfaces.

Handling: B The Maverick is right in the mix for handling among its peers. While it would take a shootout to see how it really stacks up, we do know that it handles at least as good as its competitors.

Value: B At $135 we think the Maverick provides a good product for the price point.

Parts Availability: N/A It will be a few months until we find out what the parts support will be like here in the states, hence the N/A score.

BigSquid Rating: B What do we really think about the Maverick iON RX? Well, it is certainly a stiff competitor to the cars already on the market here in the USA. It offers great looks, solid performance, and it is a great entry level vehicle. Plus, not everyone at your local bash spot has one already, which adds to its cool factor. If you are in the market for a starter vehicle, or are just looking to pick up an affordable weekend bash machine, we can absolutely recommend the iON RX to you.