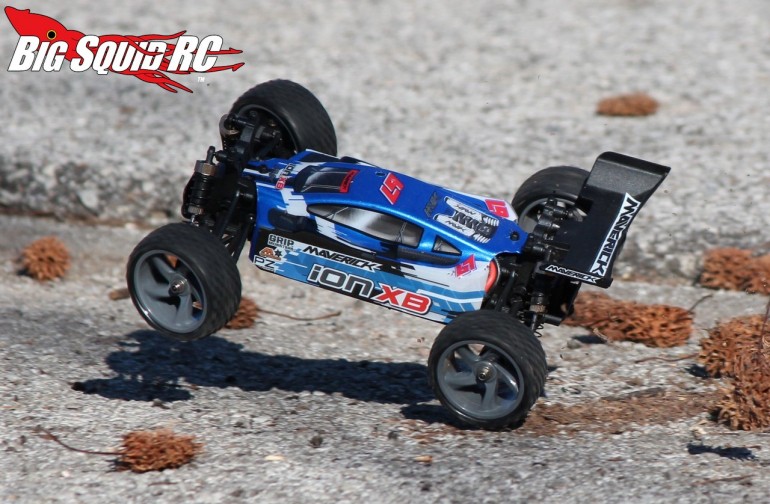 Maverick RC is new to the US market. In Europe they are well known as a basher line for HPI, but only recently have they decided to make a push here in the good ole’ USA. We tested one of their 1/18th scale rally cars a few weeks ago and this week we are posting our review of the 1/18th iON XB Buggy. Like its rally car brother, the iON XB sits on a 4wd chassis and is powered by a brushed motor and 6 cell NiMH pack. How fun is it to drive? Can it take a licking and keep on ticking? Is it fast enough to be fun? Keep on read’n to find out…

Primary Competition: Other 18th scalers like those from Dromida, ECX, Associated, and Helion.

What’s Needed To Complete: The iON XB comes with a NiMH battery and charger for the buggy, all you need to get racing is four AA cells for the transmitter.

Build Quality: We found the iON XB to be well assembled. Two of the shocks were a tiny bit low on oil, otherwise we could not find any build issues.

Test Venues: Our streak of bad weather continues, thus limiting our places to drive. We did get in plenty of packs, but we were confined to one local park, a large cul-de-sac, and our friendly local CostCo parking lot.

Set-up Notes: Nothing much to report here, we ran the buggy bone stock, including the stock battery. We did not use the included wall charger opting instead for a Hitec X2 AC Pro.

Turning: We found that we liked the steering better on the XB buggy than the RX rally car. The buggy version didn’t have as much initial oversteer as the rally, thus making it easier to drive and easier to make quick corners with. Yes, the XB did have a little oversteer during corner entry, but it was more the type that did a good job settling the buggy into the corner, instead of being so overwhelming as to make the buggy hard to drive. Once past initial corner entry, the XB just hunkered down and was well mannered through the apex and corner exit. While the XB might not be the best turning buggy in its class, it did a fine job.

Jumping: Being powered by a brushed motor kept the XB from truly epic air, but it still had enough power to get a good airtime. It liked to launch straight and generally flew flat while airborne. The XB’s soft suspension tended to bottom during landings, but otherwise it was a blast to jump.

Bumps/Whoops: For an 18th scaler the XB did a good job over rough sections of dirt and gravel. Except for hitting a large rock or dirt clod, the XB mostly stayed straight and well behaved. Slightly thicker shock oil would help it get through the rough even better, but out of the box the XB was above average for its class when pounding the whoops.

On-Road: Even though the XB is set up as an off-road buggy, we found it did a great job when driven on-road. Its small knobby tires did a decent job of getting traction on rough concrete and it was low slung enough to keep from traction rolling all the time. If the majority of your driving is on pavement, the XB will work well for you.

Grass: Unfortunately the small tires and low ride height on the XB kept it from getting around very well in grass. Thanks to its 4wd it can be driven in short grass (we did quite a bit of grass driving with the XB) but if the grass gets over an inch tall the buggy likes to get stuck.

Power: No, the XB isn’t terribly fast, but then it was designed to be noob friendly. It has a nice smooth low-end that leads to a controllable mid-range that tops out at under 20 mph. Yes, it has enough power to spin the tires on slick surfaces. And yes, it has more than enough rip to make decent sized jumps. While old school hobbyists won’t be impressed, it has enough power to be fun for a first time noob, without being overwhelming.

Radio: The included transmitter worked well for us, but it has a small’ish form factor. If you have larger hands they will be cramped, while smaller hands, like those of kids and the ladies, fit the transmitter quite well. Range was solid and we never experienced a glitch.

Broken Parts: Our bash crew didn’t waste much time putting a hard beating on the XB. Instead of getting a few packs in the bank to check out the buggy before attempting to break it, Iron Mikeee was either not driving well or just showing his sadistic streak, pounding into pretty much every hard object he would find from the word go. Also of note, the average temp during our review was around 30 degrees Fahrenheit, which is always harder on parts. With all that said, our test buggy held up really well. During a roof jump we cracked a wheel and bent a shock shaft, neither of which kept the buggy from driving. Later in testing Robbie G. caught a steel pole at speed and broke a rear hub carrier.

There is a trend right now of companies attempting to do away with body pins. Case in point is the XB- it doesn’t use pins to hold the body on, instead it uses a pair of plastic inserts that can expand & contract. We never experienced an issue with the body mounting system and really liked it.

The XB comes with a plastic rear wing. Most wings are made from polycarbonate and tend to get destroyed easily, the plastic unit on the XB held up like a boss, nice touch.

The stock servo worked well on the XB. It wasn’t crazy fast, but it steered the buggy well enough that we didn’t have a bunch of testers complaining about it.

Our noob driver Sam fell in love with the XB. The little buggy was a perfect blend of looks, reasonable power, and handling, that really appealed to Sam. We also handed off the XB a few times to first time noobs, all of which returned with a big smile.

Best Mod: Like when we reviewed the iON RX, we would recommend putting in heavier shock oil. Shock oil is dirt cheap but will pay big dividends with much improved all around handling.

Time To Bash: B Fast and easy, charge up the included pack, pop in some AAs, then get your bash on.

Workability: B While we didn’t have to do much wrenching, when we did, we found the XB very easy to work on. It uses a standard 18th scale layout that has minimal parts and is easy to get at the screw heads.

Car Show Rating: B With sharp livery on the body and a nice wheel/tire combo, our test crew liked the vibe that the XB gave off.

Bash-A-Bility: B If you are worried about the XB breaking all the time, don’t. We bashed the daylights out of our test unit and it rarely broke, even in cold weather.

Fun Factor: B With good handling chassis and enough power to keep it interesting, our Bash Crew had a great time wheeling the XB around.

Handling: A The Maverick XB is one of the best handling 18th scalers that you can buy. It has a bit of oversteer, but otherwise handles as good, or better, than anything else in its class.

Value: B The XB has an affordable price point and gives a solid driving performance.

Parts Availability: N/A Maverick is new to the states so we don’t know just how their parts support is going to shake out.

BigSquid Rating: B So here we are, after weeks of driving, jumping, thrashing, and bashing, it is time to wrap up this review. We certainly learned a lot from the Maverick iON XB. We found that it was well designed and assembled, plus we found out that it really hits the mark for a first time owner. If you are in the market for a great little bash machine we can highly recommend the Maverick iON XB to you.