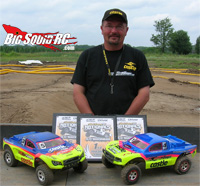 Slash Stock was the largest class at the nationals, going all the way down to an “E” main. It’s also arguably the most popular electric class in the country right now. The Slash Stock class requires that the trucks race with nearly no modifications, making the class very much a “driver and battery class” because all the trucks are nearly identical in performance. The MaxAmps 2S 4200HC helped Tim TQ and finish first in the A-main to take the national title! To quote Tim “Luckily, my MaxAmps 2S 4200HC was the fastest battery on the track. Thank you guys a TON. I couldn’t have done it with a lesser battery. I was pulling guys on the straights, and making all the jumps with ease, while other guys running lesser packs were having a rough time. Winning over a huge field of awesome drivers, in nearly identical trucks, in perhaps the most popular class in the country right now…. OMG I’m still so stoked today after the win…!!!!”

In 2wd Open, racing a Thunder Tech Outlaw chassis’d Traxxas Slash and being the only Traxxas Slash to make the A-main (the class had about 20 entries, enough for a full A and B). Tim qualified 5th, and ended up finishing the A-main in 5th place running MaxAmps 2S 4500 LiFePO4’s on a Mamba Max and Mamba 7700 motor. In Tim’s words “I gave it 110%, and it felt pretty awesome to mix it up with some of the best factory drivers in the country while wheeling a Traxxas”