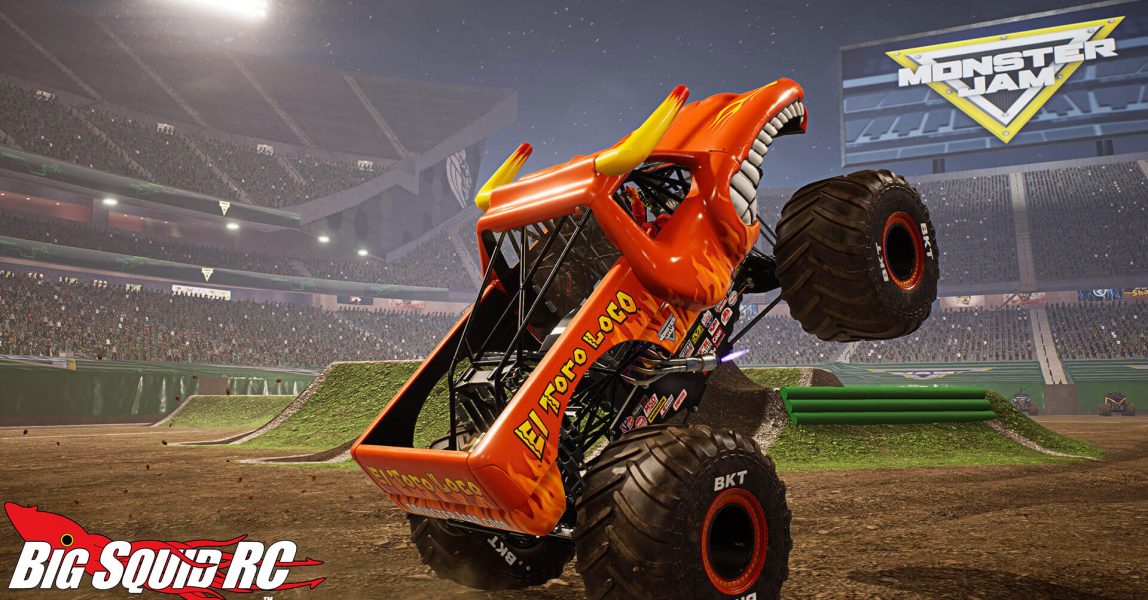 Ok folks, this week in Monster Truck Madness I am taking a VERY hard left from the normal r/c talk, and giving you a quick and dirty review of a video game that came out last week. Yes, of course I’m talking about Monster Jam Steel Titans. For the PS4, specifically (I played it on my PS4 Pro).

I was frantically mashing left/right when playing the original BIGFOOT game. Even bought a joystick just to have an advantage at it. My parents bought me a Sega Game Gear just for USHRA Monster Truck Wars.  When I was a teen, Twisted Metal got to me buy a PlayStation because I could drive a monster truck. I was huge into Monster Truck Madness 1 and 2 on PC, even getting involved in the truck modding and online racing league scenes. And yes, this column name is a reference to those games. I purchased Stuntman on PS2 just to play the monster truck level. I was an early alpha tester of the Monster Truck Destruction for iPhone/iPad. Perhaps most pertinent to this article, I have (unfortunately) played all of the Monster Jam games to date.

Boy, those older Monster Jam games, huh? For the amount of popularity that that promotion gets, you would’ve thought that someone could actually, you know, get it at least somewhat right?!

Well, someone finally has.

Monster Jam Steel Titans opens up with a lengthy tutorial at a proving grounds track. It’s here that all of the basics of monster trucking are taught- from how the controls of the game work to how to actually perform in a race. It was finally when I got to the end, where the advanced controls were offered, that it started to click. Folks, if you play this game, make sure you turn on independent front and rear steering, and learn to drive this way. More on this in a second.

A game like this lives or dies with the physics. A monster truck handles unlike any other competition vehicle. They lurch. They are heavy. They slide. They fly. I think this game strikes a really nice balance between “realistic” and “video gamey”. The trucks have a lot of heft and allow them to handle realistically, at least for the most part. Yes, some wild stuff can happen, but hey, this isn’t iracing (one can dream, someday, right?) so I get it. Anyways, I think it does a nice job striking the balance.

Now as I mentioned earlier, the game allows you to map the rear steer axle to a second control stick. Doing this made the game for me. Only then can you really have total control over what you are doing, and damn does it feel sweeeeeeeeet to hit that perfect drift in a race by just giving a hair of rear steer when you need it. It’s awesome for freestyle as well, as you can crab walk (turn all four tires the same way) to get yourself out of crooked situations. I just don’t know how anyone could play this game not using it. Freaking love it.

Oh, and to go with this, Steel Titans has a wicked cockpit view. When you touch the rear steer stick, you see the driver’s hand hit a toggle switch, just like the real deal. It’s the little things. Oh, and cockpit view is a total blast, to boot.

The graphics look pretty good, just know that Forza, it ain’t. The trucks look very good, complete with realistically breakable fiberglass bodies, and the courses themselves are nice. The stadiums though, which are modeled to look somewhat like the real ones represented, could be better looking.

I spent the majority of my time over the last week in career mode. This lets you work your way up through various tours.

The first of which is a bunch of outdoor, open world type races. These were fun, but absolutely nothing like what a real monster truck competition would be like. This had me worried the game was going to fall into the trap of so many other crappy MT games; i.e. the trucks on the screen may be monsters, but the actual stuff you do in game is really just standard off-road racing.

My fears were soon put to rest, as the next tour was an arena circuit. In this, you race in various real life arenas taking part in Racing, Two Wheel and Freestyle competitions, all for points. Even if the arenas are larger than their actual cramped real life counterparts, this was when I finally got into the game. This was a blast. Actual monster truck competition in a monster truck game? What a concept, amirite?

The arena tour gave way to the super fun stadium series, which culminates in the World Finals in Las Vegas, and an actual recreation of that track. Good stuff, man.

You unlock the majority of trucks in the game by spending career earnings on them. I played as Zombie as soon as I could afford it, shout out to my buddy Bari Musawwir, who drives the full size version.

Ok, at this point I’m going to just wrap it up and say that yeah, as a hardcore monster truck fan that has for the most part been burned by games, it was really nice to find out that Steel Titans actually delivers on the Monster Jam license. With a retail price of $39.99, it makes for an easy recommendation from me. If you don’t go in expecting a hardcore simulation, I think you’ll be quite happy.

Here’s to hoping this development team can fine tune the engine even more for a sequel!