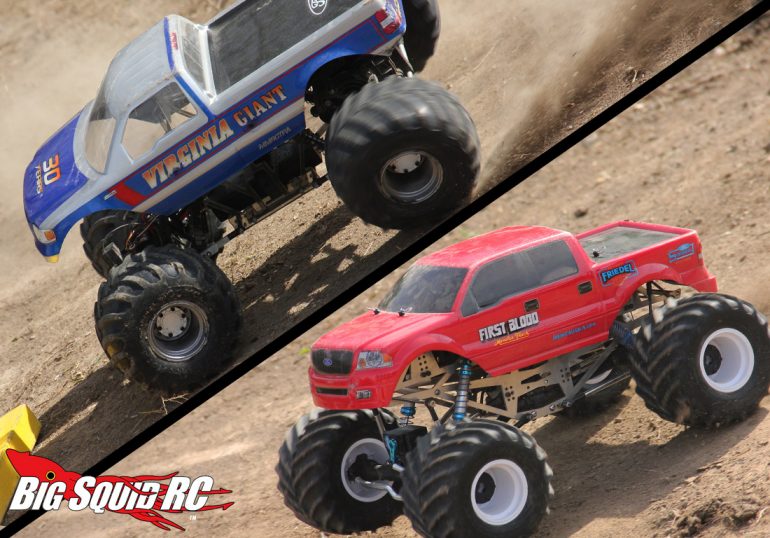 One of the most popular monster truck themed questions I get is, “What’s better, a Clod or shaft truck?”. This is probably the most asked question in the solid axle community.

It’s also a very tricky one to answer as both types of vehicles have significant advantages and disadvantages. While I cannot give you a definitive answer, I can tell you the general pluses and minuses of each as well as let you in on my personal preference. Hopefully it can help steer you in the right direction to go with a build.

Also, for argument’s sake I’m assuming that this question is being asked from someone that wants to build a modern, race style monster truck.

Case for a Clod

When properly set-up, a race Clod is a total animal. There is no central transmission as each axle has its own gearbox with its own motor. This means all the weight is low and there is basically no torque twist. Having been on the market for 30 years, there are a ton of different chassis configurations and aftermarket parts available to do whatever you want. There are also a lot of people that have a lot of experience with the platform, most residing on the Tamiya Clodbuster Facebook group.

Case Against a Clod

Clods can be daunting for a newbie. They are complicated trucks to set up and needing two electronics systems to be wired together can be intimidating. The costs associated with running one are very high. Pretty much the only stock parts you’ll be using from a kit are the axles and internal gears, everything else is aftermarket and many of said goodies are made by individual builders that do them in very small batches, increasing the difficulty to find them as well as price. The hobbyist that wants a race Clod must be prepared to experiment and be social with fellow builders!

Ever since the rise in popularity of Axial vehicles, specifically the Wraith and AR60 axles, shaft trucks have been gaining in popularity. The cost of building one can be quite a bit cheaper than a Clod and on the whole they are much easier to set up and work on. Those looking for a good performing solid axle truck can start with an off-the-shelf Axial SMT10 and be pretty dang close after putting a new set of tires/wheels on it and a front sway bar. You also only need one motor/esc. Those looking for high end carbon fiber or aluminum chassis can now find them relatively easily that are designed for Axial parts with no drilling required. Another bonus is that a shaft truck behaves more like the real thing.

Unfortunately, behaving more like the real thing means a shaft truck experiences many of the negatives of its 1:1 brethen, the chief of which is torque twist. The higher the power, the worse this can be. They do not usually fly as true as a Clod as the center of gravity isn’t as low and they are normally ligher vehicles comparatively. I’d also argue that a built shaft truck is also less durable than a built clod, mainly because Axial axle housings do not have as much beef. And yes, I’m also talking about aluminum stuff. I’ve never seen a machined and reinforced Clod axle sustain major damage whereas it’s not uncommon to see aluminum Axial style housings shear at various points. (p.s. if you want machined Clod axles be prepared to give up one month’s mortgage!).

This may surprise some of you as I’m always discussing the Clod, but I greatly prefer shaft trucks. I’ve built a bunch of both over the years but my current fleet of monsters features four shafties to just one Clod, and the Clod is a retro-styled build. I just find the ratio of “work:fun” to be much more enjoyable with a shaft truck.

I’ve fallen in love with my Axial SMT10’s and even though they take some time to get right, once you do they handle great and are very easy to work on, all the while looking and handling like a real one. I also manage to hold my own just fine against race Clods.

I can’t stress enough that this is highly subjective. I know great racers and builders that hate one style of truck and love the other. It’s all about seeing what works best for you- and therein lies the best piece of advice I can give. If you want to get involved with solid axle monsters then you need to have an open mind and be willing to experiment.

….but since you probably do want some kind of actual answer versus philisophical mumbo jumbo, here’s the TL;DR.

If you are just getting into scale monsters, I’d go with an Axial SMT10 and start modifying from there. You’ll have a solid baseline and the aftermarket is hoppin’.

If you are wanting to sink some time (and money) into a more substantial project, go ahead and give a race Clodbuster a try. There are a myriad of options as far as chassis and aftermarket parts and it’s rare that any two are exactly alike. One has not lived until they feel the power of a twin high-kv brushless race Clod at their fingertips.

Regardless of whichever you go with, feel free to drop me a line at doug@bigsquidrc.com if you need any help. If I can’t help you then I’d be happy to point you in the right direction of someone who can!

And hey, worst case if you don’t like it you can always sell it, right?!