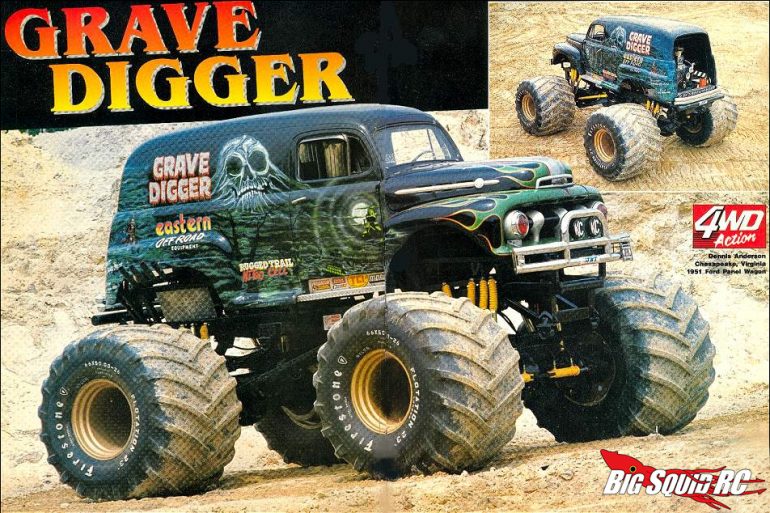 Last week JConcepts announced a very cool new body for monster truckers- the “Grandma” 1951 Ford Panel Truck. One of the most iconic monster truck bodies of them all.

No doubt several of you are curious as to what the “Grandma” is in reference to, though. The official press release gives a nod but isn’t explicit. “Grandma” is the nickname that Dennis Anderson gave the infamous Grave Digger #1.

Grave Digger is known nowadays for being colored a vivid neon green, what-with the gallons of the stuff that adorn the chassis, body and beadlocks. Purple is also now a color associated with it as well.

Grandma was different though, as while there was still plenty of green, black was the predominant color. The wheels were an eye-popping gold. There was nothing like it. In that early era of monster trucks it was all about chrome and simple paint jobs with a name painted on the side. The colors and graveyard scheme combined with the awesome ’51 grill and red headlights made for a truck that looked evil and stood out from everything else.

I remember laying eyes for the first time on Digger #1 in 1988 as a 4 year old. The truck scared the hell out of me.

Grandma was outgunned on the monster truck circuit, as the twin Predator carb equipped 427 Chevy (I think in later years it was bored out) that Digger packed couldn’t match the mega-power of Bigfoot’s Ford 540 or USA-1’s Chevy 572. Digger was also sort of cobbled together compared to many of the big money rigs that dominated the scene.

That didn’t stop Dennis from going balls-out though, and that became the other calling card of Grandma. Banzai runs were the norm…although unfortunately the truck could normally only hold together for one or two passes a night. Still, it was enough to win over fans and sell a lot of t-shirts. The truck soon gained a cult-like following and the rest is history.

Digger #1 was retired after the 1988 season as Dennis made the switch to a heavier duty chassis with the now standard 1950 Chevy Panel Truck body. That Chevy body is what still tops the modern Digger trucks, but the 1951 Ford still holds a special place in history.

As for the current whereabouts of the truck, she spends her current days sitting outside the Digger shop, “Rusting in Piece” if you will.

This past weekend one of the “majors” of r/c monster trucking took place at the No-Limit World Finals held every year at Digger’s Dungeon. Dennis was presented with this trick replica of Grandma by JConcepts (standing in front of the rusted out original truck, no less). 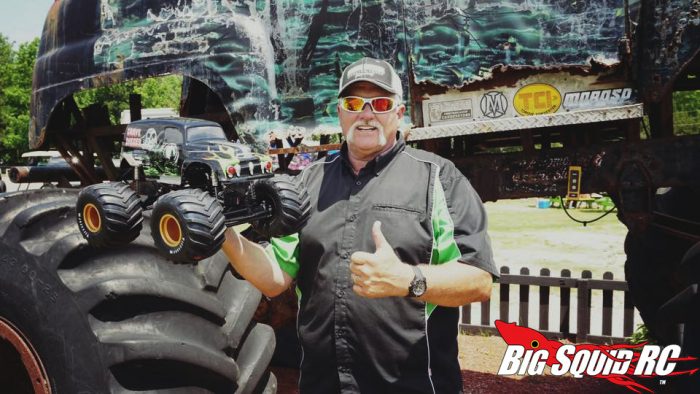 Thanks to JConcepts for taking this picture and letting me use it! This was very cool to see!

So there’s a little backstory to the meaning of the Grandma body, in case you didn’t know what it meant.

You kids can have your green and purple Grave Diggers. Give me Grandma any day of the week, twice on Tuesdays. It was the most sinister looking monster truck ever built!