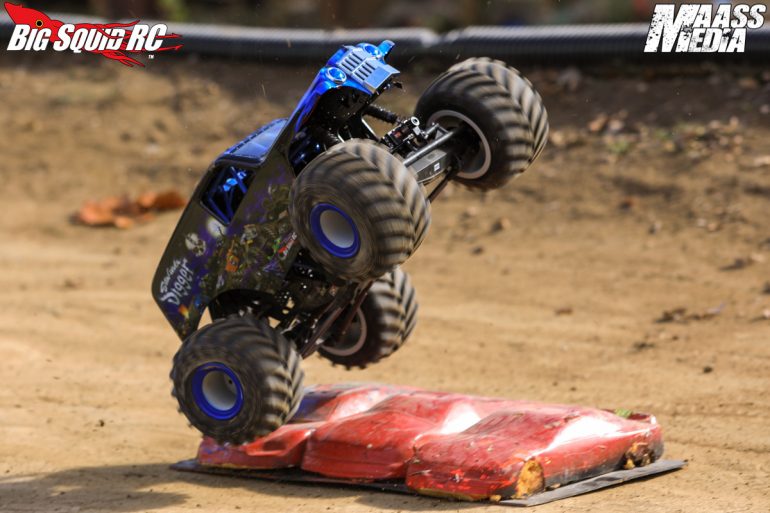 Monster Truck Madness – A Year of the LMT

Greetings gang, and welcome to the last “pre-holiday season” MTM! I use the quotes because these days, holiday season starts November 1st and NOT on the day after Thanksgiving as in years past! (and side-note, for those looking to shop early, today was a heck of a day with two big releases in the hobby!).

Last year at this time I had just finished the review that I had the most fun writing/producing during my 8 years at BSRC- the Losi LMT.

Horizon released a video this week for the one year anniversary of its announcement that talks about the development of the truck, and it really got me reminiscing.

Due to the circles I’m fortunate enough to run in via the r/c and full scale solid axle monster truck world, I was lucky enough to have some uh, inside info, of the development of this vehicle as it came about. A hushed text message here. A testing teaser there. A “rumor” at the track from someone who heard something. It was a lot of fun following everything.

Despite all that, I still did not REALLY know what it looked like until the box showed up last October. The UPS man finally arrived, the first battery went in, and then I (and our test drivers) were blown away. FINALLY someone had gotten the solid axle monster truck right!

That video above does a good job at showcasing just how much of a passion project the LMT was and is. A lot of hardcore monster truck fans had a part in putting the final version together, and it really shows.

The truck has sold well. It’s popular with the aftermarket. Monster truck racers have adopted it. Like the Tamiya Clod Buster and Axial SMT10, it’s here to stay.

So, what’s next for it? Ah yes, a fun question!

I would LOVE to see a Zombie version of the truck. Not only would it be cool to see one of the best 3D styled monster trucks of the last decade become r/c’d, but it would be a nice tribute to longtime driver of the full size rig (and champion of the LMT ) Bari Musawwir!

Outside of more cosmetic offerings, another fun idea would be to release it as a Mega Truck! Grave Digger isn’t the only big green truck that the Anderson fellas are known for!

A totally hopped up version of the LMT from the factory would also be pretty sweet. Yeah, it would be pricey, but in seeing how Horizon has done premium versions of Arrma trucks, there are A LOT of potential savings here for a hobbyist versus doing everything ala cart.

Regardless of what Losi does or doesn’t do with the LMT, I’m so happy the big truck exists and is so popular. Happy birthday!