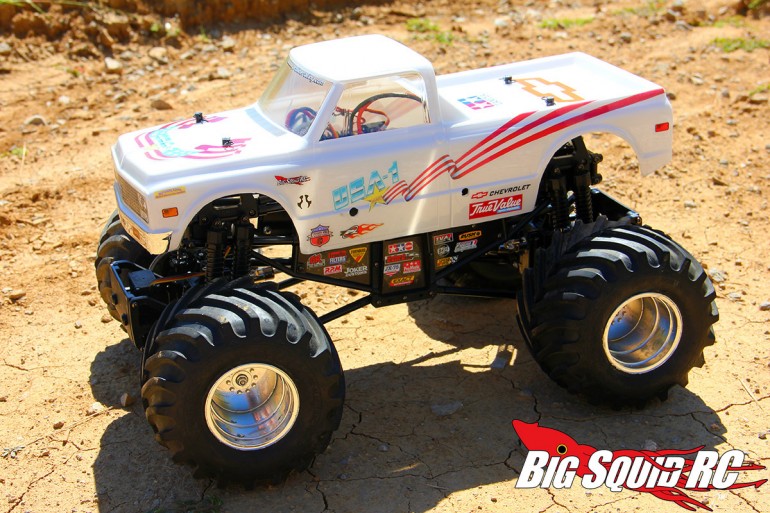 Got an e-mail over the weekend from a reader asking about the Tamiya TXT-2 Agrios. I’ve never talked about this truck before, despite having owned one, so this will be a great time.

Wanting to build a truck. But, on a budget. Seen the Tamiya Agrios platform in the txt-2 and is the direction I am thinking of going. Was wanting thoughts on this direction. Looks like a good truck. For me it’s just to have fun with. I have a traxxas stampede 2wd and a stampede 4×4 vxl and love them both and have lots of fun with them. But wanting a solid axle truck to have fun with.

Hey Curtis, thanks for the e-mail. As always, if you have a monster truck related question you can shoot it to me at doug@bigsquidrc.com.

So, the Tamiya TXT-2 Agrios.

Here’s a good TXT-2 story. When the truck was being developed back in the early 2010’s, I was working for the BIGFOOT team. Tamiya wanted the TXT-2 to be a licensed version of the then-new BIGFOOT #18, complete with trophy truck body. Tamiya even sent out a photographer that took pics of the truck about a million ways to Sunday. I saw the prototype pics and it looked sweet. Then, as what tends to happen in a lot of licensing deals, something went sideways at the last minute and the deal was never signed.

Some time later, the Agrios was announced, with the exact same body that the prototype model BIGFOOT had (the trophy truck), but with a different paint scheme and tires. The former idea would’ve been WAY cooler, methinks.

But anyways, to get to your question Curtis- the TXT-2 is a fun build that, while filled with some quirks, is a cool rig. However, just know the truck you get out of the box is the truck you are going to have, as aftermarket stuff (save for wheels and tires) is basically non-existent.

I purchased and built one in 2014. The above pic was what mine looked like after a body and tire swap. Fun truck. Glad I built one. But yeah, it’s not really something I’d bash.

It’s tough enough, mind you. The axles and transmission are quite strong. I raced mine for a few events and never had an issue. It’s just not that much fun compared to better handling and higher jumping trucks, though.

For my recommendation, if you want to stay Tamiya then go with a Clodbuster. Build one box stock and start modifying from there. They are fun builds and with the rabid aftermarket, the sky is the limit on what you can do with one.

If you want to keep it shaft-driven, try and score an Axial SMT10. While it’s been discontinued, you can still find used ones out there for a decent price. The truck is also heavily rumored to be relaunching at some point, although that is just industry here-say.

Regardless of which you choose, definitely get into SOMETHING solid axle. They are a blast!