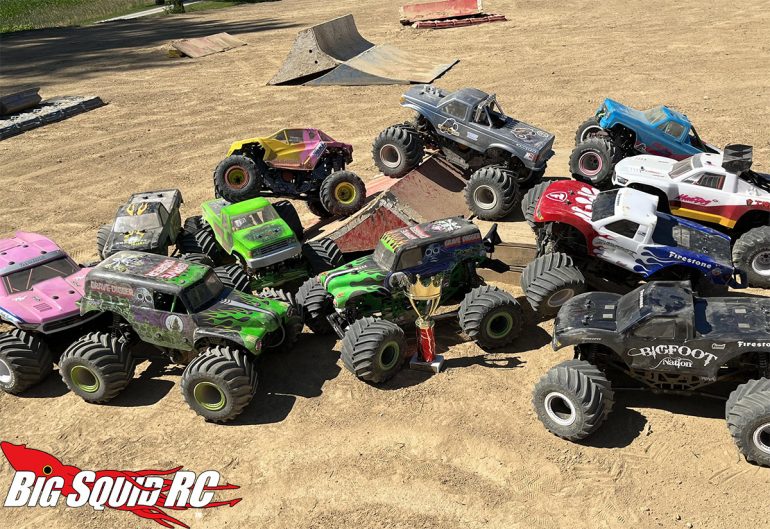 Last weekend the rain FINALLY relented and I got to go monster truck racing for the first time since March. Crazy that it’s almost 4th of July and I’ve had only two competition weekends this year, but dems da breaks I suppose.

I’ve written in the past about how the Losi LMT was starting to become a dominant platform in r/c solid axle monster truck competition, but last weekend was an eye-opening display of how it IS the dominant platform already.

Losi LMTs have turned into very tough to beat Pro-Mod trucks, and an LMT won the day’s racing event. In Freestyle competition, they were ALL OVER the podium, taking almost all of the top spots. You can see a bunch of the LMTs we had at the event in the pic above.

Dare I say it, the days of the vaunted mod-Clod are FINALLY over. Oh sure, the Clod will always be around. It’s a fixture in the hobby. But its days as defacto choice for the majority of hardcore racers seems to be over.

Mod Clods are very expensive endeavors to pursue, and to get one that’s bullet-proof enough to where it can handle the abuse that a close-to-stock LMT takes without blowing a set of gears or an axle tube gets even higher. And that’s nothing to say of the institutional knowledge it takes to understand how to setup a motor-on-axle vehicle like the Clod, or who you have to know to get the parts to prepare them for competition use.

The LMT is good out of the box, but with a few mods turns into an absolute top flight bashing and racing beast. Losi has done great logistical work to support the release and the aftermarket, most notably Treal, has been churning out quality stuff to where it’s very easy to get parts. The LMT is also fairly easy to work on.

In my time in r/c monster truck racing, I’ve built about everything out there platform wise and my modded Losi LMT is my favorite to drive by a wide margin. It feels beefy and behaves very much like a 1:1 monster.

In talking to a lot of my buddies, they all feel like I do and enjoy the LMT the most out of any in their fleet.

And I’m not slighting the Axial SMT10 in all this. I love mine (I own and compete with several). In the competition world, I feel like the SMT10 came out and did the work of putting shaft trucks on the map, allowing them to punch with mod Clods after some performance upgrades. The Losi LMT is a much more rugged and performance oriented shaft drive solid axle monster, though, which has found favor with both racers AND bashers. A notable feat!

The Clod isn’t dead, no. But I think for the first time ever it can be said with a reasonable amount of certainty that its best days are behind it. And there’s nothing wrong with that. It’s had around 35 years in the spotlight, so no shame! It also still rules the roost when it comes to retro-styled monster trucks.

Here’s to hoping that a major company releases an old-school style leaf suspension, shaft drive truck to go after that market too! Heck, maybe even Tamiya themselves? How cool with an updated Clod or, more likely, re-designed Juggernaut be to dominate that market? Time will tell, but someone’s gonna do it methinks.

I love the Clod very much so don’t think I’m hatin’! These are just my observations from behind the scoring table!

Ok, enough of my ramblings. Until next week, keep it on all 4’s.