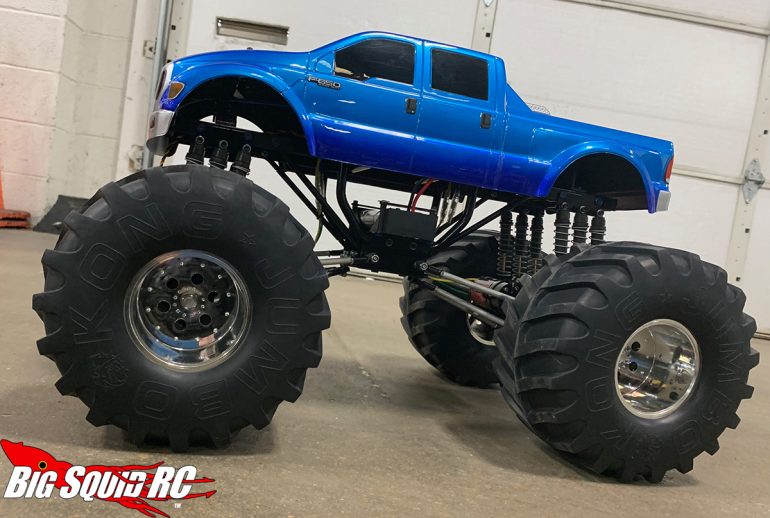 Gonna keep it short and sweet this week folks, as I am doing a bunch of traveling and then my r/c monster truck club is preparing for our season opening race this weekend.

Over the winter, one of my good buddies brought out a build that he’s been sitting on for oh, over 10 years now. It’s the heavily modified Tamiya Clod Buster you see at the top of this page. And while the Clod is a really cool build, it’s the tires in particular that I want to discuss today.

“Big Blue” is sporting a set of mint condition Imex Jumbo Kong tires with a set of trick wheels to match. For those of you that aren’t familiar with these tires, they were released back in T-Maxx Mania days of the early 2000’s, and were the sort of logical end to the big tire wars.

These things are absolutely massive, sitting at 8.5″ inches tall and 5″ wide. For a good size comparison, have a look at the pic below.

My Blue Bomber truck is pretty dang big, but look at how the Kong-equipped Clod just towers over it!

For those of you wondering about scoring a set of Jumbo Kongs, they are actually still being produced as of this writing and you can find them if you look on the Imex website. They are pretty pricey though, as a pair will run $75 bucks. You can also find them on eBay.

Be warned if you want to use them for a project- the size makes them very tough on a drivetrain. I know that as my buddies custom Clod was built to fit the tires, he chewed through parts like crazy before landing on a good set up that held together.

Still, if you want a really big-ass truck, these could be the tires for you. They are also a bit outside of the mainstream of r/c, which makes them even cooler in my book. Check ’em out!