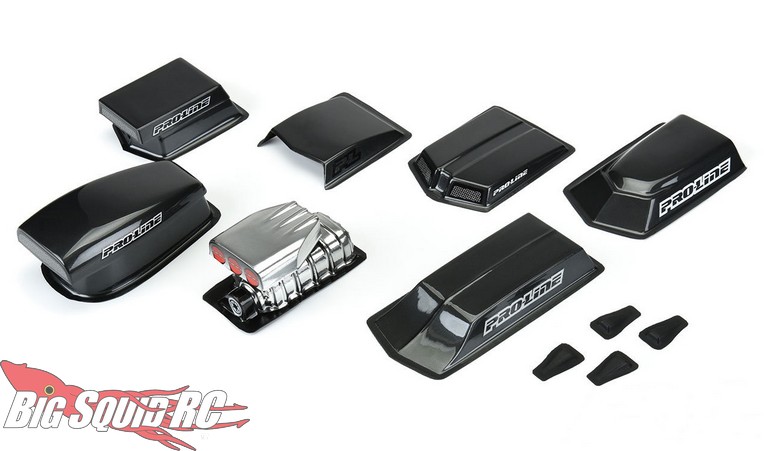 Big shout out to fellow Squid Jeremy, our in-house scale expert, for building a beautiful BIGFOOT #8 replica complete with a scale driver. Check out his column on it!

So for this week it’s gonna be my first (and probably not the last) dual column where I’m going to combine Monster Truck Madness and Laying Rubber into one. I didn’t know where to talk about this subject as it applies to both monster trucks and drag cars!

The subject of scale power adders, particularly blowers, is near and dear to my heart. From Clod supercharger hats, RPM blower tops, to more recent hood-thru collector headers, having an engine showing on a build can really be the icing on the cake.

Given the explosion in no prep drag racing, specifically in talking about all of the muscle car bodies available, as well as the constant release of darn near every post-WW2 American pick-up truck body style for scalers and monsters, there is something for everybody in this pack.

Trying to replicate that classic NHRA Pro-Stock look ala Bob Glidden and Warren Johnson? Have at it. All you mountain motor guys and fans of more recent pro-stock cars before they went to the jellybean look, your scoop is there as well.

Pro-modified drag racing has been ultra-hot in recent years due to the wild body styles and variety of power-adders on display- nitrous oxide vs. turbo vs. blown – and you can replicate each look here. Heck there are even scale NACA ducts!

Monster truck guys will get most use of the blower, methinks, but those hood scoops would look great on a variety of scalers…especially those of you who have mud boggers built!

I’ll be picking up this engine pack as soon as it’s released in the wild and I’ll be mocking up some of them on the various flat-hooded truck bodies in my graveyard so you can see what they look like. Look for that column soon!

Have a good one, folks. Next week I’ll be discussing the Jconcepts Silent Speed 17t motor. See ya then!