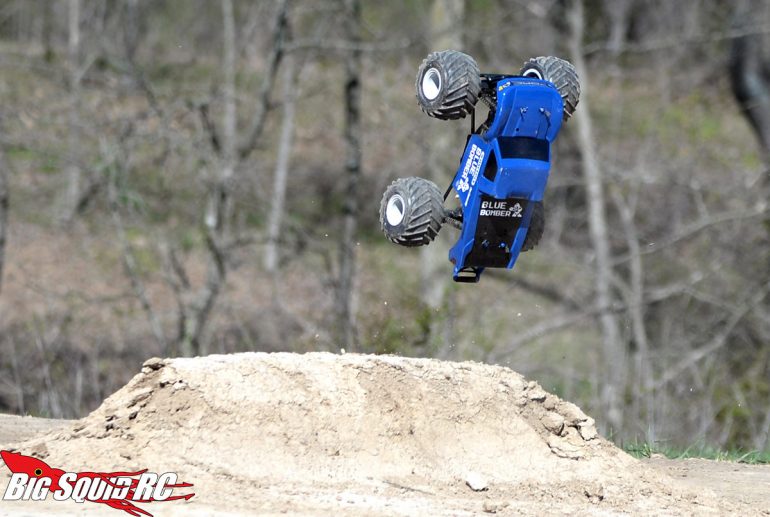 Folks, it has taken me 3 months of competition but I have FINALLY got the tune-up I like on my Losi LMT. So many of you folks have asked about this via e-mail or via YouTube comments on the Trigger King page that I was getting very frustrated in not having an answer. Well, also the fact it was driving me nuts to not have the vehicle handle like I wanted.

The issue (which has been well documented, if you read this column regularly) was that the oil that filled both the front and rear differentials was so thick (150k in both front/rear) that it acted like pseudo-lockers. I say “pseudo”, because it would eventually break loose under heavy cornering when grip was good, but still, for most the part all four wheels were driving at all times.

Now this is fantastic for bashing. Many full size monsters that you see on the Monster Jam circuit run lockers all around. This helps them pull off insane stunts by always being able to power out of it with no unloading.

The Losi LMT functions the same way. It’s tuned to be able to pull off some killer bashing stunts, right out of the box. However, in my case I am racing competitively….so it’s not ideal.

I’ve competed with my LMT at 3 events now, both racing and freestyle. I’ve used the stock tires for the spec class and then swapped them for high bite Pro-Line Demolishers for freestyle, so I’ve experimented with different traction setups. It’s been on loose dirt, high traction dirt, pavement and grass.

I started out by putting 50k oil in the rear. I figured that would loosen the rear up but the let the front pull. This did not work. The truck felt VERY off.

I then went to 50k front, 20k rear. This let the truck feel better, but it still pushed hard in the corners and under heavy throttle in slick stuff, the rear would come around.

Finally, last week I said the heck with the oil. I’d just drain it from the diffs and see what it felt like with none (minus a smidge for lubrication). Finally, this was the ticket.

The LMT felt fantastic with oil-less front/rear diffs. The truck was so much more nimble and handled great! Pushing was now minimal and it felt closer to a mod Clod Buster or SMT10.

While having completely open diffs did hurt it slightly in freestyle in regards to recovering from wild spills, I felt the increase in control more than made up for it. I’m extremely happy with this rig, now!

So there you go folks- if you guys are racing your LMT’s or are wanting a slightly more controllable rig than how it feels stock, experiment with draining your front and rear differentials. It’s a no cost mod that you may end up really liking!