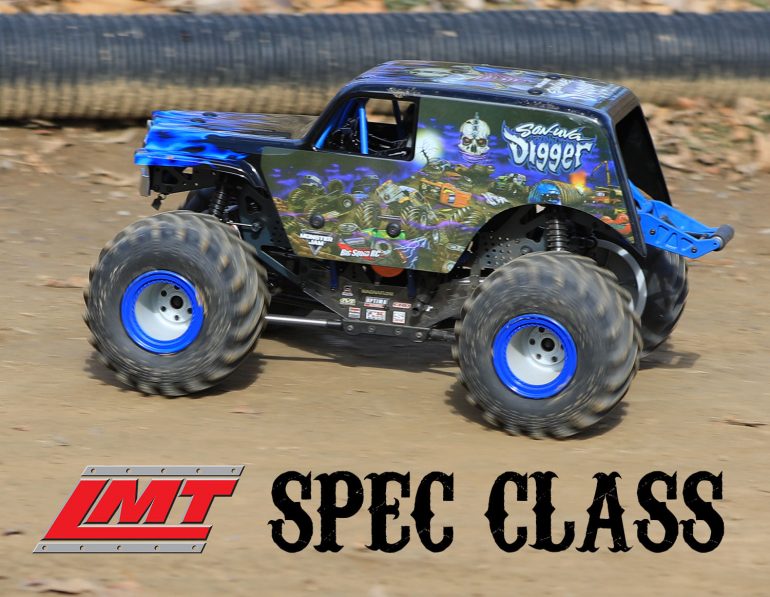 Hey all, it’s ya boy Doug, coming at you hot and heavy with another dose of LMT talk. After a lot of discussion, my monster truck club Trigger King R/C has come up with a set of rules for a Losi LMT Spec Class. We will be running it all summer long.

The rules we’ve come up with are as follows:

The Losi LMT Spec Class was developed in response to the 2021 release of the Losi LMT Monster Truck. A hobbyist should be able to open the box of their LMT and be ready to race. In it, racers will be limited in what modifications they can perform to the Ready-to-Run vehicle, keeping competition tight and a premium placed on tuning and driving.

These rules were decided and voted on by the competition committee and are good for the 2021 Calendar Year.

EVERYTHING must remain stock except:

Battery: Limited to one 7.4V 2S lipo with 100C advertised discharge limit (7.6V are not allowed) – fyi these battery rules are the standard for Trigger King so that’s why we kept them place here.

Any components modified beyond these will result in disqualification. This includes aftermarket steering, axle components, etc. As the season moves along, exceptions may be made if critical component failure is discovered or if mass shortage of stock replacement components/electronics.

The logic behind this class is that the Losi LMT is ready to race right out of the box and we want to promote the vehicle as such. As someone who has raced A LOT of various Slash spec classes over the years (everything from standard off-road to dirt oval), the limited modding here keeps in spirit with that.

It allows someone who wants to try solid axle monster truck racing to be able to do so by just purchasing an LMT and battery/charger. That’s it, really.

The rules allow for small tuning tweaks without the need to drop money on big upgrade parts.

The reason there is a stipulation stating that things may change throughout the season is that if there is indeed some kind of major structural weak point that is found while racing them that impedes competition unless it’s fixed, maybe some aftermarket stuff will be allowed. We won’t know that until they are on the track, though.

Going back to Slash racing, back in the day it was discovered that the plastic shock caps stripped easy. Because of that, aluminum caps were allowed. This did little to change the way the vehicle handled and didn’t add much cost, but it made for a necessary durability improvement to keep them on track.

I’m looking forward to running this class as we plan to start our outdoor racing season in March! More on it, then.

Talk to you all next week.