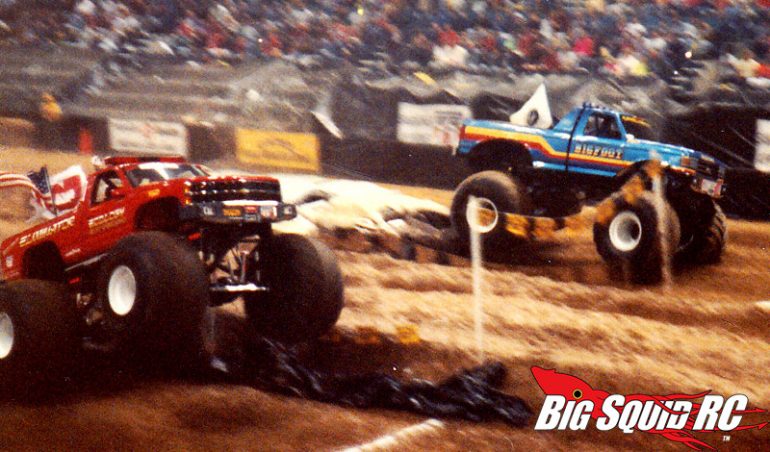 My birthday was this past week, February 27th to be exact, and while that’s fine and all, the date is important to me for another reason. On February 27th, 1999, the St. Louis Arena was demolished, which means that last Wednesday was the 20th anniversary. The Arena, called “The Old Barn” or “Checkerdome” by many locals, held many awesome childhood memories of mine. I never got to go to any St. Louis Blues hockey games or concerts there, but I did get to experience many an evening of classic monster trucking.

St. Louis, MO is the birthplace of the monster truck movement, what-with Bigfoot, Taurus, Bear Foot and several other big names from the golden age of the 1980’s calling the region home, and the Arena was the spot to throw down as each winter the USHRA tour rolled in to town.

I scanned some pictures that my parents took during the 1990 and 1992 shows, and I’ve been wanting to post them here for a long time. I figure the 20th anniversary of the Arena coming down was as good a time as any to post ’em up!

This batch of pictures is from the 1990 Camel Mud & Monster Series event. It had some killer monster truck racing that saw Bigfoot #4 face off against the Ecology Eliminator in the finals. You can see how close the finish was by the shot at the top of the page! There was also some sweet mud racing as the side attraction, featuring many great names of the era. To this day, this is still my favorite monster truck show that I’ve ever attended in person.

This next batch of pictures is from the winter event in 1992 where two notable things happened, the first was that Bigfoot #10 made its competition debut. The second is that the Taurus racer took a corner too hard and rolled over. It was a great time!

Hope you all have enjoyed seeing these old pics. Apologies for the quality but hey, these were scanned in from pics that have been sitting around for close to 30 years! Man, in viewing these pics I can smell the musty concourse, the stale beer and the methanol. RIP STL Arena, gone but not forgotten.