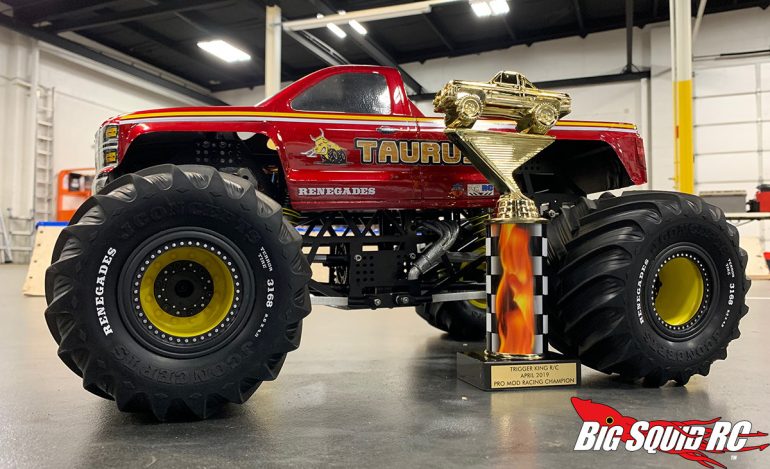 I’ve got a personal story that I wanted to share with you all this week. It’s a racing story, and I know Big Squid is mainly a basher-site…but it’s still a monster truck story, so there’s that.

So this past weekend my club, Trigger King, kicked off our official 2019 racing season. We are lucky enough to have built up a following where each month we attract racers from all over the midwest to head to our location in St. Louis, MO.

One of those racers is Jeremy Mark, who makes a 6+ hour trek (each way!) from Wisconsin. Jeremy started racing with us about two years ago, and was a total noob to monster truck racing. Unfortunately, we don’t have a novice class or anything like that….so each long trip was usually met with being knocked out of competition early by a more experienced driver.

Being newer to the complex world of solid axle monster trucks also meant a lot of mechanical gremlins to overcome. It’s always frustrating when a build malfunctions on the track. Even more so when the drive is so long!

One monster truck turned into two, two into four, four into five. That’s how the r/c monster truck thing goes, haha. Oh, I also need to give some props to Jeremy for his amazing looking builds. At the top of the page is his Pro-Mod Taurus, which is Axial based but running an ACRC Havoc shafty chassis. Below you can see his Taurus 3 Honeycomb edition SMT10 (this was a real paintjob back in the day), Buffalo Tremor II SMT10, and Taurus 1 and II retro Clod Busters. These trucks are all stunners in person.

Ok, back to the story.

Jeremy kept driving slow and learning how to stay in control, even when it meant losing a race. As time went on and he learned his trucks, his speed increased. Soon the passes were getting much faster. Fast forward to last Sunday and our season opener, and finally, after two years of racing, he took the overall win in our Pro-Modified class. For those uninitiated to r/c solid axle monsters, Pro Mod is the A class with the best equipment, fastest speeds, and wildest runs. He absolutely dominated the day and took his first ever trophy back home to Wisconsin. More are sure to follow.

I’ve been in the hobby a long time, and it’s always fun to see the growth of a fellow competitor on the racetrack, especially when someone transitions from “noob” to “one of the fast guys”. Congrats Jeremy, you’ve earned it, buddy!

Hopefully his story is a nice pick-me up to those of you out there who are struggling in some aspect of the hobby. It only gets easier with practice!