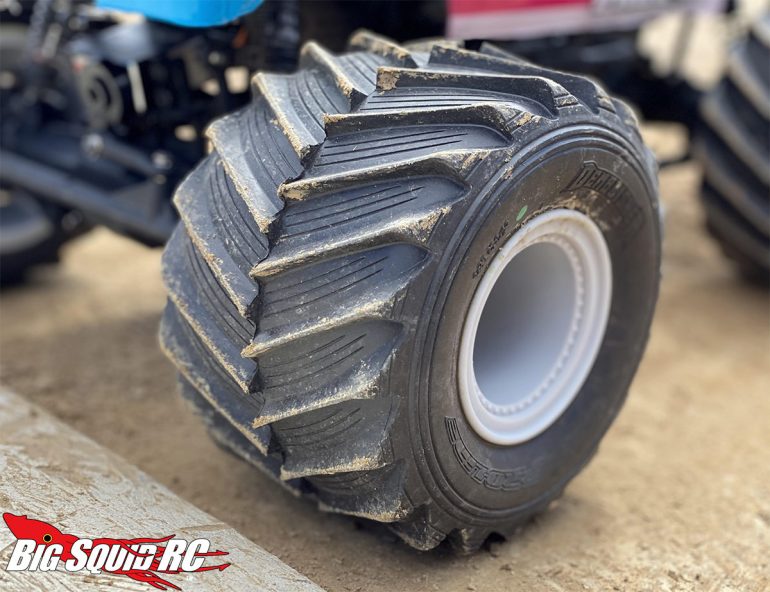 After the longest winter, I finally had the chance to hit the track with my Losi LMT! I was at the season opening Trigger King R/C Monster Truck Series event in Waterloo, IL, and the LMT was out in force.

I’ll talk more about the competition experience next week, as right now I want to give my impressions on the Pro-Line Demolisher 2.6″/3.5″ Monster Truck Tires, which are made for the LMT.

As of the publishing of this article, the Demolishers only fit the split diameter Losi LMT stock wheels. They mount up via CA glue.

After a day’s worth of competition on both mine and a buddies truck, I can say these things are a MASSIVE upgrade over stock.

The compound is very sticky. This allowed the heavy truck to have bite on what was otherwise a blown out and slippery loose dirt track.

The “sharp” lugs are very pliable and bite hard when the truck is under power. The heavy weight of the Losi helps them to dig harder. The sidewalls are a slightly grooved flat shape and we found that it had decent lateral grip as well.

We also had the truck in a public park for a day of bashing, and while the tire excels on dirt, it’s still quite nice when running on grass or mulch. You’ll have plenty of grip.

Where you’ll want to probably shy away from this tire is if you are running primarily on cement or pavement. The truck will have so much traction that you’ll be rolling with ease. The soft compound and sharp treads will also dull relatively easily and get eaten up by an abrasive surface.

The included foams do a good enough job of soaking up the rough stuff. Still, we think a good closed cell foam would REALLY unlock the capabilities of this tire. This is really a critique reserved for the competitive racers, though. For the average basher, these foams are more than enough.

So yes, we really dig these. So much so that our testers feel these are almost mandatory upgrades for the LMT, assuming you run in any kind of off-road conditions!

Big thanks to Tadpole Photo Studio for helping me get these pics while I was running, as well as my buddy Troy Hawes for offering his impressions (he has the Wild Hair truck, Blue Bomber is mine).

Posted by Doug in Accessory Reviews, Monster Truck Madness on Friday, April 2nd, 2021 at 10:51 am