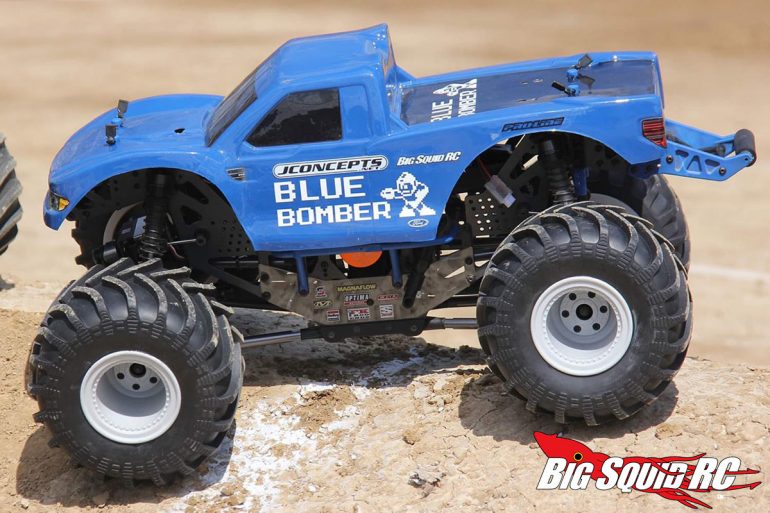 Hey guys, more Losi LMT talk comin’ at you this week. Before that, in case you missed it I recently posted a review the LMT specific Pro-Line Demolisher Monster Truck Tires. Check it out if you haven’t!

So I FINALLY got to get in some competition time on my LMT. During the same race day I was also wheeling old school retro-chassis’d Tamiya Clod Busters, a high powered race Clod, a modded Axial SMT10 AND two Axial based ACRC Havoc chassis’d shaft trucks.

That’s a lot of variation in vehicles! And you know what? That really gave me some newfound perspective on the LMT. Well, that, and it helped reinforce some opinions.

The Losi LMT really is a beast, and it FEELS that way compared to the other vehicles. Well, most of them. Definitely the shaft trucks.

Axial based shafties are so light that handling them back-to-back with an LMT takes a minute to get yourself calibrated. Wheeling an also-heavy Mod Clod by comparison feels close to the LMT in the heft department, but you have SO MUCH more power on-tap thanks to the twin brushless setups (that are both motor-on-axle, to boot) that it’s wildly different.

So yes, the LMT is definitely its own beast. That’s not a bad thing, though. As I noted in the review that we did back in November, it feels very much like you are driving the real thing. Wheeling my fleet has only given me more conviction in this belief!

Ok, so that’s great. But how did it ACTUALLY handle? The answer is good, but it needs some tuning.

My entire monster truck fleet is made up of vehicles with open differentials. The Losi LMT, while technically having “open diffs”, has ones that are filled with heavy fluid. And a fluid center diff as well! Quite a bit different.

Because of this, in racing conditions on loose dirt the truck wants to push mightily in the turns. The heavy curb weight and heavy fluid filling the differentials makes for a vehicle that doesn’t feel as nimble in the corners as I’d like. On this kind of surface, the limited-slip you’d get in high bite conditions is more of a locked-up situation. That doesn’t work.

So, I’m about to make my first real tuning change. The truck has 100k fluid in both the front and rear. I’m going to make a considerable tweak in attempt to get the truck to loosen up.

And that, friends, is going to be the subject of next weeks article. With some new diff oil and gaskets (thanks to Tony @ CCxRC for this tip!), we are gonna see if I can’t get this monster tamed a bit.

Until then, keep it on all four’s!