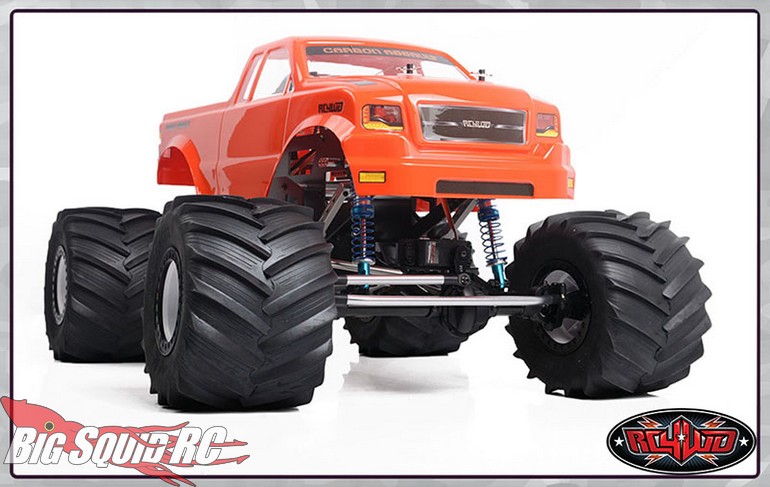 Boy, the r/c monster truck news keeps coming fast and furious as of late, doesn’t it? I can’t seem to catch up! I had meant to talk about my JConcepts Regulator Clod build, but thanks to RC4WD dropping some major news it’s gonna have to slide to next week. And yes, sorry I keep bumping that off, but given I will be racing my Regulator this weekend as will 5 buddies that all are debuting them, I promise a very comprehensive write-up on the Clod chassis soon!

Ok so, about that major news. The RC4WD Carbon Assault Monster Truck was announced!

The Carbon Assault is a ready to run solid axle monster truck that, based on the stats, looks ready for bashing/competition right out of the box.

Here’s a link to see the full spec sheet, but there a few notable things that jump out to this long-time monster trucker-

– Badass tires right out of the box. The RC4WD Rumble tires are no joke. I used them for many years before Pro-Line/JConcepts started releasing their wares, and they are still the preferred choice of many. They bite hard, are a good size and the wheels they are mounted on look really trick.

– Front AND Rear Adjustable Machined Sway Bars. FINALLY. A solid axle monster truck absolutely needs a good set of front and rear sway bars, and the Carbon Assault looks to answer the bell here. Those are beefy. You can also run them several ways which leads to the next point.

– Adjustability. Aftermarket solid axle monster truck chassis are popular because different people like to run different setups. The Carbon chassis, while not riddled with mounting holes like some of said aftermarket get-ups, still looks like it has a good number of options for how to run your shocks.

– A lot of machined parts in critical areas. The Carbon Assault looks like it has strength in a lot of important areas, be-it the axles or transmission.

– An aggressive stance coupled with a long wheelbase. The truck has a stance much like a 1:1 monster and sitting at a wheelbase of 14.1 inches, it’ll probably have a lot of stability in the air.

It’ll be really interesting to wheel one of these things and see how it does. How will a 2 speed perform in a monster truck? What about the new axles? Lots of questions, I have.

While I need some wheel time with it to form any kind of real opinion, it’s awesome that another major r/c company is taking a shot at a solid axle monster truck. Much love to RC4WD for this. They’ve long supported the solid axle community with parts, now they are going whole hog with a release of their own. Solid axle fans should be happy that more and more companies are flocking to this segment of the hobby.