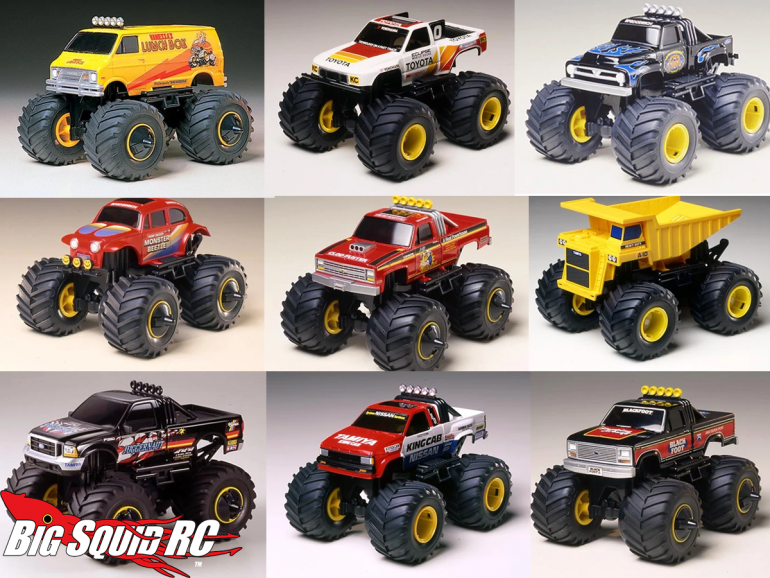 Last week the crew at Horizon announced the retro-styled Losi 1/16 Mini JRX 2WD Buggy and it took the internet by storm. A LOT of people were excited by this retro-styled release, and the low price of admission had hobbyists backing up their interest with their pocket books as apparently pre-orders were extremely strong.

Hey, I want one of these too (though I’d much rather a 1/10 release!)! I remember duking it out with JRX’s back in the early 90’s and seeing those vintage paint jobs on the mini replicas takes me back to the SMELL of the hobby shop I used to race in. Good times, man.

Boy, wouldn’t it be awesome to see some classic monster truck releases in mini-form?

The pic above is of various 1/32 Tamiya “Wild Mini” series trucks. Starting in the late ’80’s and going through the 90’s, Tamiya offered small scale model/toy kits of their popular larger r/c monsters. These were battery powered and, while not remote controlled, they were still pretty cool!

Bump those up to a slightly larger scale and make them r/c, and Tamiya would sell a boatload of them. And while Tamiya is well known for their stable of classic rigs, they aren’t the only ones would be able to cash in nostalgia from something like this.

Kyosho has a back catalog of monster trucks that’s pretty robust. The USA-1, Big Boss, Big Brute, or Hi Rider Corvette? Get ya some! Heck, they currently have the USA-1 license, so that may not even be an issue!

Traxxas could absolutely release a small version of the classic Sledgehammer and get the old-timer’s hearts a-flutterin’. Once upon a time, in a pre-Stampede and Maxx world, this was their flagship. How sweet would bringing a small version of that classic back be, complete with the old school pin v tires and a white molded chassis?

I don’t even know who (if anyone!) has the license for it these days, but a classic tribute to the Big Bear from long-defunt Marui would be very cool, too.

And yes, while true re-releases of the above would be my dream, a 1/16 with correct bodies and tires would more than suffice. I’d love to have them on my shelves, if nothing else, in recreated box art boxes!

What say you all? Would you be lining up at the hobby shop with a wad of cash for a baby-sized classic monster truck?