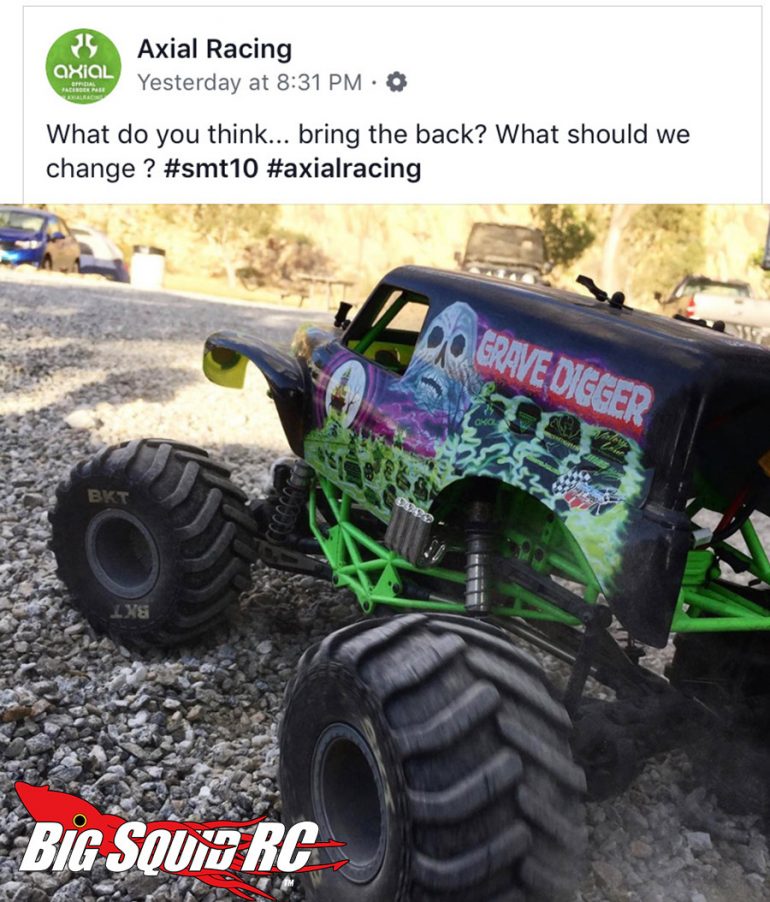 The shot above is a screen grab from an Axial Facebook post they put online on a few days ago. They asked for suggestions, should they bring back the SMT10 platform. I figure instead of submitting a comment, why not just devote this week’s MTM to the topic?

I’ve been building and racing SMT10s in monster truck competition for 4 years now. I’ve talked about them ad nauseum in this space for years. Outside of the original Clod, it’s probably my favorite r/c release of all time. Suffice it to say, I feel like I know the platform pretty well.

Here’s what I’d like to see updated over the OG Grave Digger and Max-D versions, should it come back. And bare in mind that while yes, I’d love to see a completely tricked out version that’s done up to the 9’s, I’m trying to be realistic here on what could be an actual release, mass marketed to your average monster truck nut at an affordable price.

One of the most popular modifications that folks made to the OG SMT10 was to shorten the wheelbase. The truck sat at a super long 13.9″, and therefore it did not play well with the vast majority of aftermarket bodies on the market. One of the most popular modifications that folks had to make was to get an aftermarket short wheelbase kit, dropping it down to around 12 and a half inches. It would sure be nice to be able to fit a sweet JConcepts or Pro-Line body on it, right out of the box, without having to get brand new links. I’d think this could be done relatively cheap, by using new plastic upper and bottom links.

The stock SMT10 could be fun to bomb around with in stock form, if you used 3S and installed the higher tooth pinion….but it had crawler drag brake on the AE-5 ESC. This was, uh, not ideal. That needs to change on the next release. It would also be nice if a lower turn brushed motor was used, say, around 20 turns. If this was done, the SMT10 could be a lot of fun right out of the box.

Include a Front Sway Bar

The SMT10 came with a rear sway bar but nothing up front. This lead to a truck that was quite “rolly-poly” in stock form. If you added any speed or larger tires, it became unwieldy and absolutely needed a front sway bar added to avoid going arse-over-tea-kettle under hard cornering. A front sway bar should come standard.

Officially licensed monster trucks are cool, but in the SMT10’s case I don’t think it’s necessary. I think what is more important is a lower price, and not having any licensed goodies would help the cause to be at said lower price. I think $299 or under is the sweet spot for this rig.

You know, I’ve been very critical of the SMT10’s included 2.2 sized tires in the past, but the more I think on it, the more I believe 2.2 is absolutely fine for the RTR version. Just make them unlicensed so we don’t have to pay too much extra, as many folks will put on the larger Clod-sized JConcepts and Pro-Line Racing tires.

I think the above changes would make for a very successful re-release of the SMT10. Solid axle monster truck fans would basically buy it indefinitely, methinks. However, if I had my druthers I’d have one more suggestion…

I would absolutely LOVE to see the SMT10 come back as a Raw Builder’s Kit, sans tires, electronics and body. It should have upgraded transmission gears and maybe a few other hop-ups like aluminum c-hubs, knuckles and rear lockouts. Let us customize the rest with all of the amazing goodies the aftermarket provides. If they could get the price on this to say, oh, i dunno, $199 to $249, I think they would move a lot of them.

While that’s my .02, I know that regardless of how it comes back, myself and other monster truck nuts are just hoping that it DOES come back. It’s a heck of a platform!