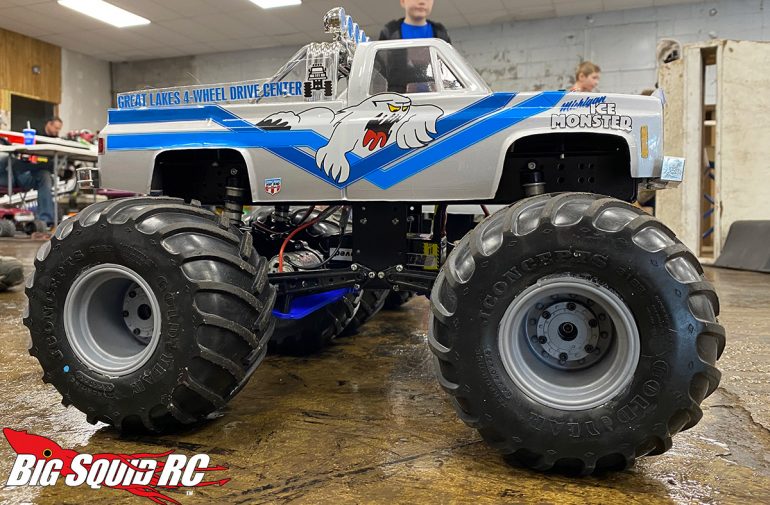 Monster Truck Madness – What is a Retro?

What exactly is a “Retro Monster Truck”? That’s the question that’s become the topic du jour within the solid axle monster truck community as of late.

For this week’s MTM I’m going to try to explain to the uninitiated as to why it’s a topic, and then, probably against my better judgement, give my .02 in response to the question.

So, a Retro Monster Truck. What is it? A gross oversimplification is that it’s a solid axle r/c monster truck which looks like a full size rig that would’ve been tearing up arenas or posing for Peterson’s 4×4 Magazine glamour shots back in the late 1980’s.

I say “gross oversimplification” because the above criteria allows for A LOT of interpretation as far as a rulebook.

Back in the mid 2000’s, some folks in the NRCTPA started racing Tamiya Clod Busters that were replicas of famous 1980’s real monsters. Once pics and videos started making their way around the message boards, other folks took interest. Fast forward 15 years to the explosion in popularity of r/c solid axle monster truck racing, and most regional clubs throughout the United States offer some form of the class.

The main consensus between clubs is that the truck must have an era appropriate body and tires as well as some semblance of a suspension from yesteryear…but after that it really does vary.

Some clubs allow only replica bodies. Some don’t care. Some require higher turn motors and lower voltage batteries so the trucks are slower, some allow builders to volt up and run them faster.

The Tamiya Clod Buster is the main platform used for this class, but it’s not the only one. Some builders go with custom built shaft driven machines. It makes it tough to try and police things when you are dealing with shaft vehicles and motor-on-axle (MOA) trucks all competing against each other with low power motors.

Compounding this is the fact that advanced chassis design and other sorts of hardcore racing tech is constantly being applied to make some question whether the class is “retro” at all anymore, or simply a slightly slower, more ill-handling version of a pro-modified monster truck with an old body.

In a way, seeing this tech proliferate the class is pretty cool because it’s very reminiscent of what happened in the full scale world. The monster trucks that started regularly racing (and winning!) in 1987 were quite a bit different than the ones that came about 2 and 3 years later to regularly take the podium. The trucks were lightened, power increased and various experimental chassis/suspension configurations were being used, but the rigs had still NOT involved into the modern monster truck.

That line between “old school” and “modern” is where I believe most clubs (mine included) are running their Retro class.

Here’s the deal- after six years of running some form of a Retro Class at club events and keeping a close eye on what other clubs are doing nationally, I’ve come to the opinion that how it’s being done now is probably the best way. More trucks continue to get built, and the class keeps growing in popularity. Sort of a “if it ain’t broke, don’t fix it”.

Yeah, the trucks vary a bit from club to club, but they are in the same ballpark. As someone who was and is a massive fan of the golden years of full scale monster truck racing, I love how the regional variance in the r/c racing scene closely resembles how it was back in the day.

In the late 80’s you had various hotbeds of monster truck builders- the central and upper midwest, Texas, the Carolinas, the southern and pacific west coast, the rust belt. All of these were “monster trucks” to the untrained eye, but most featured different styles of construction.

The same can be said for r/c. The Retro trucks that are from the midwest, west coast, New York, Mid-Atlantic….all can be quite different under the body, but all look like the same to the average hobbyist- a sweet looking old school monster truck.

Now, I think there is a great argument to be made for splitting up shaft driven Retros and Clod-based ones if vehicle count allows, but that’s probably a different discussion for a different time.

Regardless of my own personal opinion of what is or is not “Retro”, this discussion is quite timely for me as I am currently building a racer out of a box-stock Tamiya Clod Buster Black Edition. Next week I’ll be discussing that project, starting with a brief review of the kit and going into my modification plans. See ya then!