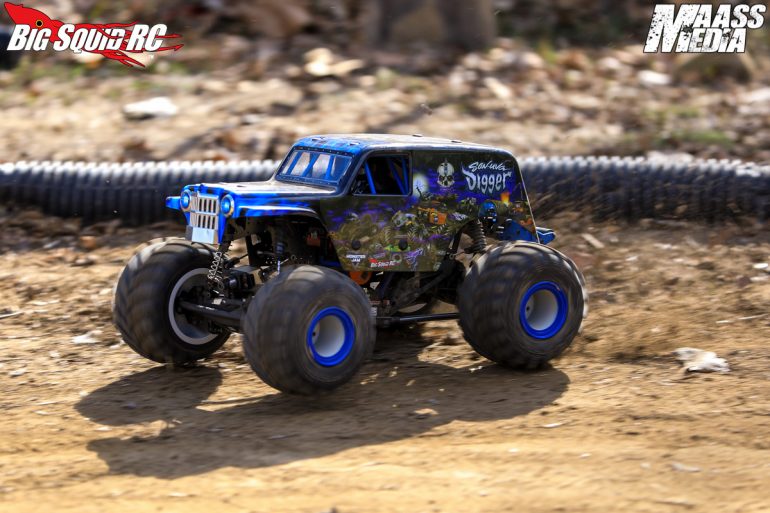 Monster Truck Madness – Where does the Losi LMT fit in?

The Losi LMT is here. Many of you already have one or have one on the way. With the truck finally out in the wild, I can now discuss something that I’ve been dying to talk about. Where does the Losi LMT fit in to the r/c monster truck racing eco-system?

Speaking as someone who is a race director for a large solid axle monster truck racing club, I’ve been having this discussion with industry colleagues, racing friends and readers pretty much nonstop since the truck was announced.

For those wondering “what gives, why the discussion?”, I’ll try and get you up to speed.

For the longest time in this segment of the hobby, you had modified Tamiya Clod Busters and that was pretty much it. From the Clod’s release in the late 80’s through the early 2010’s, the limited amount of monster truck racing clubs out there had rules that were tailored around the Clods and their unique motor-on-axle configuration. It was also during this time that the “Clod-sized” monster truck tire/wheel combo became the standard for this type of competition.

During that 20-ish year period, the Clod was king because it was really the only viable option for a solid axle monster. That all would change in the 2010’s, though.

It was during this time that the “scale boom” and the meteoric rise of Axial happened. Almost immediately, builders started using Axial AR60 axles and AX10 transmissions to mate with custom built chassis to create a new breed of shaft driven monsters. Solid axle monsters were now starting to really gain in popularity.

So popular, in fact, that the mid 2010’s saw the aftermarket start to churn out parts for them, with the likes of Pro-Line and JConcepts offering racing wheels/tires in the now-standard Clod size so builders had actual performance driven options to choose from.

The release of the Axial SMT10 in late 2016 caused the still-somewhat underground monster truck thing to then become its own boom.  Modded Axial SMT10’s were becoming more popular than Tamiya Clod Busters on the racing scene, and many of the racing clubs that were beginning to pop up started running shafties and Clods together in larger, all encompassing classes.

So, here we are in 2021 and the Losi LMT has just released- the first ever solid axle monster truck that’s bred for the race-track upon opening the box.

The reason there is discussion on where this truck fits in is for two main reasons:

1 – It comes equipped with wheels and tires that are of a different design than the Clod Buster, which itself used wheels that were/are modeled after a full sized agricultural unit that 1:1 monsters employ. The LMT wheel and tire are designed to be similar in configuration to an R/C Short Course setup. It was engineered this way for optimal performance as it has less rotating mass and sidewall play on the ID of the wheel. Some feel that this combination should be outlawed for r/c monster truck competition because of its difference with the standard Clod configuration.

2 – The LMT has a center differential. The center diff is nothing new to r/c, as they’ve been popular in racing vehicles such as 1/8 buggies for a long time now. They are highly tunable and are fantastic for performance. They are new in the world of the solid axle monster trucks, however. That’s where the discussion comes from.

This is how my club, Trigger King, intends to approach the Losi LMT.

I want to start with the center diff, as to me this part of the discussion is the easiest. Assuming you run Clods and Shaft trucks together, this should be legal. Motor on axle and shaft drives are wildly different, each with advantages and disadvantages, so why not allow the center diff configuration to join in the fun? Since my club, Trigger King, allows them to run together, the LMT is completely legal here. Heck, we’ve already had guys running center diffs in custom builds, so this isn’t anything that new.

All of these set-ups can be very competitive against each other, depending on driver’s preference and tuning skill. I look forward to LMT’s battling Clods, SMT10’s and everything else out there.

The wheels/tires thing is admittedly a bit trickier, but we are planning to allow them in the Pro-Modified division, which is where the lion share of Losi LMTs will be, anyways. Yes, the new SCT-style wheel sure does seem to work well out of the box, but does it offer an advantage over, say, race trucks running feather-light closed cell foams with race compound JConcepts Renegade tires? Dunno about that.

Trigger King’s approach to the LMT will be a welcoming one. We want someone to be able to open the box of their shiny new LMT and immediately be able to join the high flying world of r/c solid axle monster truck racing. If something gets out of whack during this upcoming first season of LMTs in competition, ok, maybe we will look at amending some rules, but not until something is proven on the race track.

I would urge other solid axle clubs to have the same approach. This is the performance oriented monster that many of us have dreamed about releasing for many years, and I feel it’s important to try and be supportive of it in our hardcore niche of the hobby.

Something else that we are strongly considering is also offering an LMT spec class, which allows for minimal modifications but keeps the truck more or less in the configuration that it’s in as it comes out of the box. More on that soon, as we are actively workshopping this.

Well, there’s my .02. It’s a very, very exciting time for this segment of the hobby.