No Fair, You Can See Me! 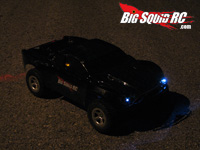 While working on some final testing for our Charger Shootout, it was evening here at the Big Squid RC headquarters, and as always.. there was bashing on the brain! While watching a LiPo discharge (similar to boiling water) I suddenly heard the buzz of a electric motor zooming outside the shop. I grabbed a radio, a Slash, and followed pursuit. There were a couple of ramps set up, and it was pretty cool to see the effects of the RC-Lights (read the review HERE) as the vehicle caught some big air. Like most times when there are Traxxas Slash’s out, we ended up with a good round of tag! (You know.. the kids game.. but with RC vehicles). Since it was late and dark out, it made the whole event just that much more challenging. The only problem.. suddenly my awesome looking lights were a big disadvantage! Not only could the vehicles I was chasing see me coming, they could also easily track me when I was being chased! We had a blast till all our packs were drained. As always, there were no major vehicle casualties, (see Basher Approved) and everyone involved had a blast, including the spectators! I think it might be time to rig up a 3rd channel ‘stealth’ mode! Sure I could just unplug them, but where’s the fun in that? 🙂