Just got some word from the Insane Speed Run that happened last week at the Encino Velodrome. Sounds like it was a good time.

Speed enthusiasts from as far away as Florida, Alabama and even Japan piloted their RC cars around the steeply banked concrete oval at speeds of 60, 70, and even 80+mph! The excitement of seeing an RC blur carving through the corners at illegal highway speeds was only topped by the rush felt by the drivers themselves. Through the night, records were set and high speed carnage was suffered, and both to the roar of the crowd. 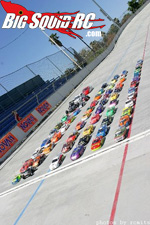 Congrats to everyone who made it out there and participated. For more information you can check out the www.rc-isc.com web site.