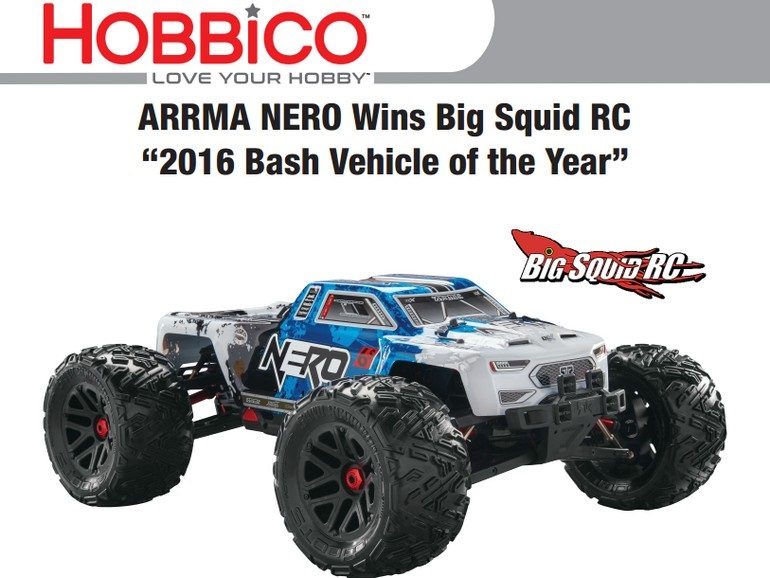 As a faithful reader of BigSquidRC, you already know who won our “2016 Bash Vehicle Of The Year”, the ARRMA Nero Monster Truck. Today, both the crew from Hobbico and ARRMA put out formal press releases to celebrate their big win. The Nero certainly earned the award, it is a high-tech, revolutionary bash machine that proved itself to be the best of the best in 2016.

Here is the official press release from Hobbico on the Nero’s big win.

“Champaign, IL, January, 2017 — Big Squid RC has named the groundbreaking ARRMA NERO 6S as their “2016 Bash Vehicle of the Year!” The experts at Big Squid RC were impressed by the truck’s “intense power system” and loved how the NERO can “take a serious bashing.”

Big Squid was also blown away by the revolutionary Diff Brain, which locks and unlocks diffs on the fly from the transmitter. This lets bashers switch between four driving styles—blast, wheelie, drift or climb—matching performance to any condition.

Two versions of the NERO are available: one with the Diff Brain already installed, and a standard version that comes ready for an easy upgrade. Both models are armed with a powerful BLX brushless system that delivers blistering 60+ mph speeds.

This is not the first Big Squid award for ARRMA. The brand previously won two back-to-back “Bash Vehicle of the Year” awards for its GRANITE monster truck in 2013 and 2014.

Check out the full story on BigSquidRC.com and order the ARRMA NERO at arrma-rc.com.”

And here is the press release from ARRMA.

“It’s official…Big Squid RC has named the ARRMA NERO 6S as their 2016 “Bash Vehicle of the Year!” Big Squid was blown away by the truck’s “intense power system” and the revolutionary Diff Brain, which lets bashers switch between four driving styles: blast, wheelie, drift or climb. The brand previously won the “Bash Vehicle of the Year” award for the GRANITE BLX monster truck in 2013. For the inside scoop, check out the full story on BigSquidRC.com!”

You can get full details and specifications on the ARRMA Nero at At This Link on the ARRMA website, or you can give This Link a click for all the latest ARRMA news on your favorite bashing website, BigSquidRC.