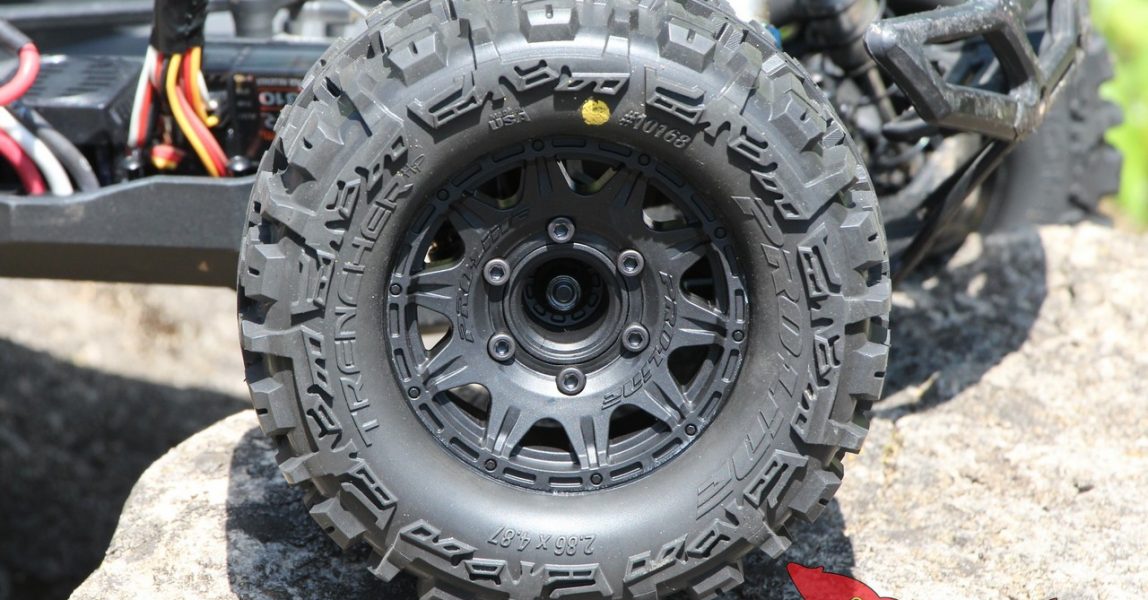 This review has been a long time coming folks. No, we aren’t talking about how we got a new set of Pro-Line Trencher HP 2.8″ Monster Truck Tires a few weeks ago and have been trying to burn their rubber off ever since. We are talking about how our hobby has long been waiting for monster truck tires that do not turn into pizza cutters when making speed runs. Not an easy thing to do, the crew at Pro-Line have done all the research and development needed to finally let loose on the world a fully belted off-road monster truck tire. We were ridiculously stoked to try them out, scroll on down to get a feel for just how different the new Trencher HPs really are…

Build Quality: As we normally do, we passed the Trencher HPs around the room. This gives us a chance for a number of eyeballs to truly inspect a product. After everyone got a chance to inspect them, we could not find a single fault. Also, whoever glued the tires did a fantastic job.

Set-up Notes: During our test period, we used them on 3 different trucks. Our primary test rig was a highly modified Vaterra Halix 4wd 1/10 monster truck. This is a truck that we’ve used to put on extreme demonstrations for years, and we know exactly how it reacts with a plethora of different tires. Our second main test rig was a Pro-Line PRO-MT 4×4. We have a half dozen PRO-MT 4x4s around the shop and they are truly our “go to” trucks when we want to get extreme. Our third test truck was a good old Traxxas Stampede 4×4. The Traxxas was VXL powered on 3S, the Halix was a 4S truck, and we used 6S in the PRO-MT 4×4 (Heck ya!). No, we were not lacking for RPM on any of the three test vehicles.

Ease of Use: OK, so the set of Trencher HPs that we received were pre-mounted. However, they comes on Pro-Line’s high-tech Raid removable hex wheels. The center hex inserts do not come pre-mounted to the wheels. The reason- the wheels come with the two most common offsets for the wheel hexes. Pro-Line leaves the install of the hex to you so that you can use the offset of your preference. This takes a number of bolts on each wheel (6 to be specific), but in this cordless drill era, it took us less than 5 minutes to bolt on the proper hexes for whichever truck we were driving.

Traction/Grip/Driving: Most monster truck tires are a tail of two cities. At low speeds, on low cell counts, they typically keep their shape providing ample grip around corners, climbing hills, etc. However, once you up the power levels, a typical monster truck tire looses its shape and deforms. At high rpm levels a normal monster truck tire will expand at the center, completely destroying the tread pattern design, as well as its width where it touches the ground. This results in very little available grip when you apply maximum power, exactly when you need grip the very most.

Pro-Line’s belted tires are a tail of just ONE city. They perform equally well at low and high speeds. No, we did not gear our cars for over 80 mph as Pro-Line designed the tires for around 70. So no, we did try to find out at exactly what mph the Trencher HPs simply pop, we geared our trucks to use all the Trencher HPs were designed for. With that said, we saw virtually ZERO tire expansion at full speed.

We must note, that gearing the belted Trencher HP tires will be different for some people than on non-belted tires. With non-belted tires expanding to twice their size (or more!) at higher rpm levels, most bashers will need to gear up to maintain their normal top speed after going belted. As always, take SPECIAL care to never over-gear your truck (pinion and/or spur gear change for more top speed) or you may overheat your electronics, plus you could go past the speed rating of the tires.

As all of our test trucks were already running high cell counts, we didn’t need to do many gear changes for the belted Trenchers. After you get your first set of belted Trenchers, we would highly recommend bringing along a temp gauge to check your motor temps if you make any gearing changes.

Overall for driving- finally we have a basher tire that works as it should at all speed levels. On small bumpy surfaces the carcass on the Trencher HP is slightly firmer than the non-belted. This can result in a tiny bit more bounce in certain situations, but we also had test drivers who couldn’t really tell a difference between a belted and non-belted Trencher over rough ground. The belted version did seem a tiny bit firmer overall when landing from jumps and bumps. The belted HPs felt like they had a slightly firmer insert, but that may have just been the added firmness of the belt. But once again, not all our test drivers could tell a difference when landing a jump on belted Trenchers compared to non-belted. All in all, the Trencher HP does drive/feel slightly different at lower speeds than the non-belted. The big news here of course is that at high speeds, the belted Trencher HP is untouchable. It is vastly superior to the non-belted version, or any other 2.8″ monster truck tire on the market. Big words we know, but that is exactly how they perform.

Driving with the belted Trencher HPs was a truly eye opening experience. Finally we have a great, perhaps the best, monster truck tire of all time, and now it can handle high LiPo cell counts without deformation. Driving anywhere, or really doing anything while pounding the throttle, was just soooooo mucchhhh easier with the belted tires. After driving for so many years on tires that got all sorts of wiggy at speed, it feels truly invigorating to be able to pound the throttle on a 4S truck and STILL HAVE FULL CONTROL at 70 mph!

We highly doubt that the Pro-Line Trencher HP tires will ever get the recognition that they deserve. These are the tires that can literally change the hobby. We’ve had all this power since around 2005, but we’ve never had the tire technology to actually put it to the ground! Now, in 2019, we can thank Pro-Line for doing all the engineering that it took to create a tire that could live in the modern world of rc backyard bashing.

Downsides: Hey, we have people on staff that love to do backflips, are you a backflip guy too? If you are, non-belted tires have a huge advantage in stretch for pulling off that last couple of rotations. Otherwise, if you are more about control with all four tires on the ground, you will want (read- need) to go belted.

Final Verdict: While the Pro-Line Trencher HPs are easily the best 2.8″ basher tires in history, do you really need them? If you are running low power levels and are not breaking 30 mph, then no, the belted Trencher aren’t a must have for you. However, for everyone else, yes, the belted Pro-Line Trencher HPs should be considered a must buy! These truly are a huge leap in bashing technology folks, the future is right now!