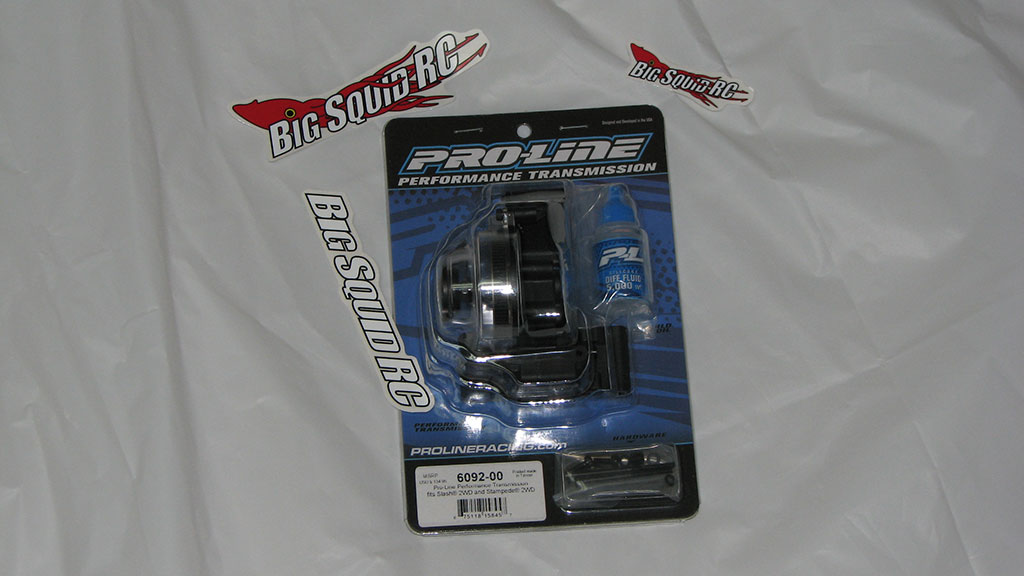 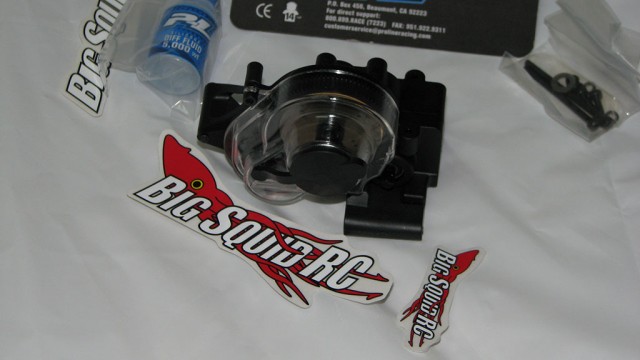 Traxxas has sold roughly 9.412 zillion 2wd Slash’s/Bandit’s/Rustler’s/Stampede’s, and while they are a bashing staple and are generally solid trucks, they aren’t without fault. For example, how many of you Slash owners out there have blown out more than a few (dozen) spur gears? How many of you Stampede owners have cooked a few motors? Hey, you Bandit owners, how many slippers have you melted down when running big brushless power? The stock Traxxas transmission certainly has plenty of room for improvement. Pro-Line saw the need and decided to have a go at fixing all those issues (and more) with their new performance transmission. Did they succeed? Read on…

What’s Needed To Complete Install: Nothing but normal tools you should already have in your toolbox.

Build Quality: Per the norm with anything sporting the Pro-line logo, superb.

Set-up Notes: I installed the Pro-Line tranny in our Anza tuned 2wd Traxxas Slash. Speedo was an original Castle Mamba Max, motor was a Castle 1406 4 pole 4600, radio system was one of my personal favs the Futaba 4PL, and we used MaxAmps 2S 4200 and MaxAmps 4S 6500 Race Spec Lipo’s to provide the juice.

Build Notes: It took me less than 45 minutes to install the new Pro-Line transmission in our Anza tuned Slash. Fit and finish was perfect, there was nothing that needed to be trimmed or modified for a proper installation. The rear toe block that came with the Pro-Line transmission fit our Slash RPM rear arms and stock Slash hinge pins very well with no binding. Attaching the stock Slash rear bumper to the new tranny was quite easy but I’d liked to have seen a longer top bolt with a lock-nut to provide a bit more support.

Performance: Let’s cut to the chase shall we?

Transmission- It’s easy to feel by spinning the spur gear of a stock tranny in your hand vs the Pro-Line, that the PL spins much more freely. Combine that with the lower rotating mass of the PL tranny and your motor doesn’t have to work as hard to power your truck around the track or cul-de-sac. The PL is also virtually bomb proof with it’s metal gears.

Slipper- The stock slipper set-up on the Slash doesn’t work badly, at least not until you up the cell counts/power levels, then it tends to work like a lightswitch- it either slips all the time or doesn’t slip at all, there is virtually no in-between. The Pro-Line dual pad slipper not only works more consistently when driven on lower cell counts, but also works much better on higher power levels. Also, nice touch from Pro-Line that you can use the same wrench for tightening the slipper that you use to remove the Slash wheels.

Differential- The diff that comes in the Slash isn’t a bad unit, but the Pro-line is made to handle serious power levels and is adjustable. The stock 5,000 weight oil that comes in the Pro-Line diff felt good on a slick dirt tracks, but of course you can put in thinner or thicker oil to suit conditions or to cater to your driving style.

Motor Mount- One reasons it’s so hard to keep motor temps down on a stock Slash is the fact that the motor bolts to plastic. The Pro-Line motor plate is made out of aluminum and helps pull heat away from the motor, thus lower temps.

Spur Gear- I can’t count how many Traxxas spur gears we’ve blown to smithereens in Slashes. Our review Pro-Line spur gear is still alive and well even after repeated runs on 4S. The peace of mind that you don’t have to worry about blowing a spur gear every time you land a jump WFO or grab a handful on 4S is worth the price of the PL tranny alone.

Overall: The Pro-Line is vastly superior to the stock tranny in every way, in fact it might very well be the best 3 gear tranny to ever hit the market. It’s quite obvious that someone at Pro-Line studied every problem that currently exists for a 3 gear tranny and engineered their unit to fix them all. So yes, it’s superior in every way, but are you going to see some huge increase of performance after you bolt one up? The Pro-Line transmission was noticeably freer while driving, and we noticed lower motor temps immediately. The reduced drag and rotating mass of the PL tranny probably gave us slightly longer runtimes, but that was something we didn’t attempt to measure due to crashes, driver inconsistency etc.

What broke: Nothing, zero, nada, and not for lack of trying. I did the standard types of bash abuse on 2S Lipo and the transmission held up great, so it was time to bolt in some 4S power and really throttle it gung-ho in an attempt to melt or snap the tranny into submission. Even on 4S Lipo I was unable to break the Pro-Line transmission (although I did break 2 drive shafts and strip out a rim in the process).

Misc Notes: The clear spur gear cover is a little work of art. It’s the little things that separate the good from the great from the works of art, and the PL crew paid absolute attention to every detail on their new transmission.

Time To Bash – 9/10 – The Pro-Line transmission install went about as quickly as a tranny change could go. The fact that the tranny comes completely assembled saves you loads of time. Oh and, the separate toe block will save you time in the future if you ever have to yank out the transmission.

Workability – 9/10 -The PL tranny is well laid out and easier than the stocker to wrench on.

Car Show Rating – 10/10 – This is one kick ass uber looking transmission that will make your friends want one based on looks alone.

Bash-A-Bility – 10/10 – I did my best to blow the Pro-Line transmission to Kingdom Come, but I was unsuccessful. “Sigh”

Fun Factor – 9/10 – Driving (ok, torturing, LOL) Brian’s Anza tuned Slash on 4S without worrying about grenading the tranny was a LOT of fun.

Value- 9.0/10 – Ok, so street price is probably gonna be right around $100, is it worth it? Holding one in your hands will go a long ways towards answering that question, IMO the remarkable build quality, not to even mention the upsides in performance, is worth well over $100.

Big Squid Rating – 9.3/10 – Tentacles.. I hate reviews that end up all positive, seriously, I get paid to complain and argue, not rant about how good something is. But… there just aren’t any downsides to the Pro-Line Performance Transmission, in every area it simply pwns the stock Traxxas transmission. Pop the cash on the Pro-Line Transmission, I highly recommend it.