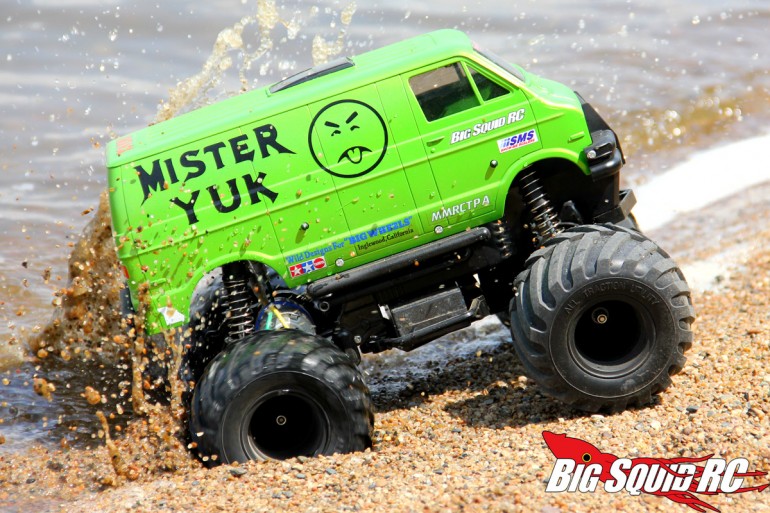 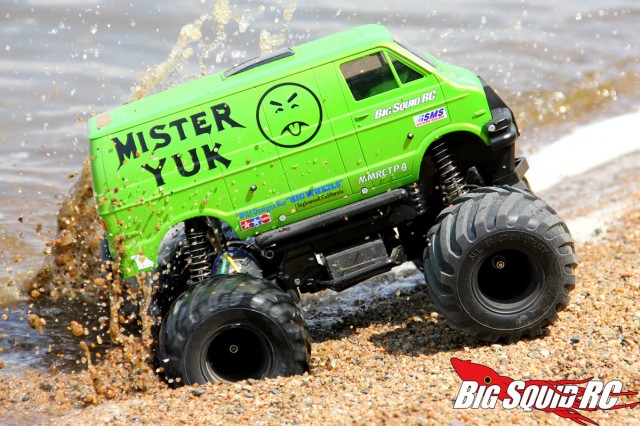 For 20 years I’ve been meaning to build a Tamiya Lunch Box (street priced around $114, part #58347) but alas, procrastination is a terrible mistress. When I was younger I never had the cash. As I got older I never had the time. Well ok, that’s not entirely true. I’ve always just decided to throw my duckets at more pressing…dare I say “modern” projects. I’ve put it off no more. A local monster truck club is about to run a class of retro monsters so that was all the excuse I needed. Before talking about how it turned out, let’s set the mood with this old school (circa 1987-ish) promotional video for the Lunchie:

Ah yes, the beach footage, smooth guitar solos and hilariously localized voice over set the mood nicely. Yes, now I too can “enjoy the feeling of those car crushing events and mud bog races so popular in America”. Click the “Read More” below to see if the ‘Box truly rocks.

It’s always fun to build a Tamiya. The Lunch Box is actually the fourth model I’ve built of theirs (I’ve done a Clodbuster, TXT-1, and Mad Fighter buggy) but the last time I cracked the box on a Big T kit was over 10 years ago. That nostalgic feeling came whooshing over me with the first whiff of plastic. The manual still had the fantastic “do not do this!” type illustrations (see some of my favorites below) and was well laid out. I had planned on showing a few pics of the kit going together but it was actually built quicker than the time it took you to read this. Ok, I’m embellishing but seriously, I think I was done building in about 2 and a half hours. It’s a very simple truck and went together very fast.

Retro releases have become all the rage in recent years, cashing in on fans who either owned, wanted to own, or weren’t alive to own some of the most popular cars of yesteryear. Some maintain the appearance of the classic vehicle while tweaking certain things to make them more palatable to the modern hobbyist (like Associated’s RC10). For better or worse, the Lunch Box stays true to the original with the exception of including an ESC versus the older 3 step mechanical speedo. The chassis is a basic plastic tub with independent front suspension and an integrated gearbox solid axle for the rear. It comes with the standard 27t “silver can” motor. I added an Axial AS3 (aka ready to run) servo I had lying around and threw in a Spektrum SR201 rx. I opted to change out the Tamiya battery connector for a Deans plug. I also ditched the toyish plastic bumper as it killed the scale look I was going for. Here’s a look at some of the guts:

I decided to eschew the conventional paint to go for a different theme. The truck was going to be used for monster truck racing so it needed a name, needed to be bright, and I also wanted something retro. Something that said “Heavy Metal Touring Van”. I murdered out the chrome parts by scuffing & shooting them with a flat black plastic paint. The body was shot in Tamiya Candy Lime to give it a poisonous green glow. It was finally namin’ time. What fit the theme? The iconic Mr. Yuk! For you younger readers, Mr. Yuk was created in the 70’s as a poison prevention mascot. I slapped his face on and adorned the Lunch Box with “Mister Yuk” in classic Megadeth font. It was time to thrash. (Cue the intro to “Holy Wars”)

The 2S Pro-Match Racing 6500 mah pack I used provided more than enough power for this little guy. Mister Yuk could get the front end up when I wanted, but the truck was surprisingly controllable. I always figured a Lunch Box did nothing more than wheel stands but I was wrong. It also jumped and handled the rough stuff pretty well considering it has friction shocks and a wacky old style suspension setup for wheelies. Speaking of that, the bar on the rear did a nice job of keeping the truck from flipping over when it went vertical.

There is one big negative on the truck though; the steering. The steering was so bad that I thought I must’ve done something wrong. I disassembled the front and put it back together with another servo and saver only to get the same result. I wound up calling a buddy that owns a few of these trucks and he explained that’s just how the stock steering is. Basically only the outside wheel really turns unless you are at speed and blip the brakes. Bump steer is the name of the game. I eventually got the hang of the setup though. I’ve found a few various mods to coax some more turn out of the truck, so I’ll probably do a short piece on that after I find a setup I like.

So yeah, janky steering aside the truck is really cool. I’m looking forward to racing it in our retro class where it will do battle against other vehicles from the golden age of r/c monster truckin’ (Midnight Pumpkins, Clods, Big Bosses, USA-1’s, Double Dares). It’s cheap (right around a C-note for the kit), a great build and a fun little backyard bomber that harkens back to the old days. It’s also a big head turner at the local bash spot. I’m happy that after all these years I can finally cross building & owning a Lunch Box off of my r/c bucket list.

For more Tamiya news on Big Squid hit up this link.