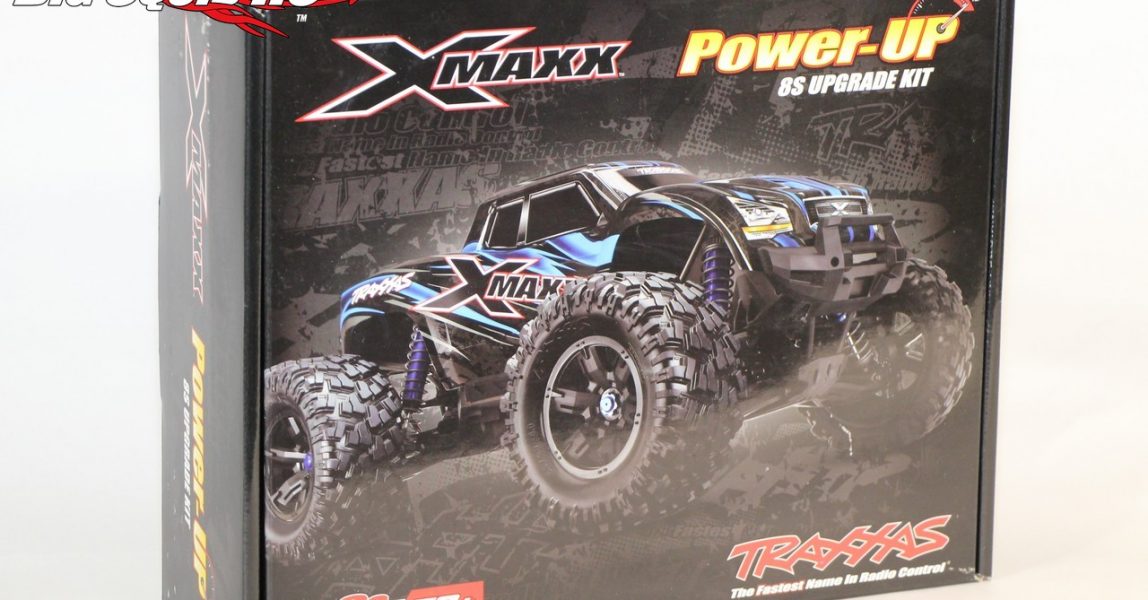 While the Traxxas X-Maxx is a beast right out of the box, its power system doesn’t have the insane yank of something like the E-Revo on 6S. To give the X-Maxx more power, Traxxas has released a 8S Upgrade Kit. The upgrade kit comes with everything needed to allow your X-Maxx to handle 30+ volts worth of input power. What is the kit like? Is it hard to install? At the end of the day, how much faster is it? Read on to learn more…

What’s In The Box: A LOT of stuff. The kit includes a new 8S capable speedo, a wheelie bar, and all the drive-line parts needed to take the beating of serious power. Here is the full list of parts.

Build Quality: We found no faults with the quality of any of the included parts.

Set-up Notes: We installed the upgrade kit in our original X-Maxx test truck. The truck was nearly all stock with the exception of upgrade Traxxas shocks (with the stiffest Traxxas springs, which we can highly recommend) and Traxxas aluminum wheel hexes. The upgrade kit does not come with batteries or a charger, so we used a pair of Traxxas 4S 6700mAh LiPo batteries charged off a Traxxas EZ Peak Live charger. There is a good amount of wrenching involved with installing the kit, so we busted out a bunch of Dynamite tools to get the job done in an easy fashion.

Installation: The 8S kit comes with written instructions, but we relied on the installation video posted by Traxxas to get the job done. At no point did we have any issues with the install. All the parts fit perfectly, just like OEM parts should. Yes, you have to take a whole lot of the truck apart to get everything installed, but if you’ve owned for your X-Maxx for any amount of time, it is probably overdue for a good inspection anyways. To boil it down, the install went better than expected, and with help from the video, even a noobie should be able to put in the upgrade kit without an issue.

How It Drove: While jumping from 6S to 8S isn’t that huge of an increase in voltage, it results in a big difference in power output with the X-Maxx. Stock the X-Maxx pulls hard down low and in the mid-range, but falls flat early up top. That changed instantly with the upgrade kit. The extra voltage allowed our test rig to keep pulling like a freight train in the upper reaches of its RPM range. We started driving the truck with a stock 15 tooth pinion, which was much faster than stock, then bolted on an 18 (which comes with the upgrade kit) and it pulled even harder. With the 18 tooth installed the X-Maxx’s top speed was then limited by its tires, all of which were doing a great imitation of pizza cutters when nearing top speed. Also, when driving with the 18 tooth pinion, the truck had even more yank from a dead stop, which was quite impressive compared to stock. Wheelies became incredibly easy, not just because of the extra power, but also because the included wheelie bar kept the truck stable when driving on just the back two wheels.

One of the most important aspects of the kit is the 8S capable ESC. We found the speedo exceptionally smooth for a non-sensored unit. When pulling away from a dead stop, even uphill, there was zero cogging, just a buttery smooth launch.

Lastly, we drove our upgraded truck like we stole it. The drive-shafts held up perfectly and we didn’t break anything supplied with the kit. Just knowing we can drive the truck hard without breaking a bunch of drive-line parts makes the kit worth every penny.

Final Verdict: Is the 8S upgrade kit worth the money? At $299, oh heck yes it is. It gives the mildly powered stock X-Maxx a lot more rip across the entire RPM range. And perhaps even more importantly, it beefs up the drive-train, thus allowing you to really squeeze on the trigger without having to worry about doing a bunch of wrenching afterwards. If your X-Maxx still has a stock power system, we consider the 8S upgrade kit nearly a must have. It is easy to install and greatly increases the grin factor on an already beastly truck.