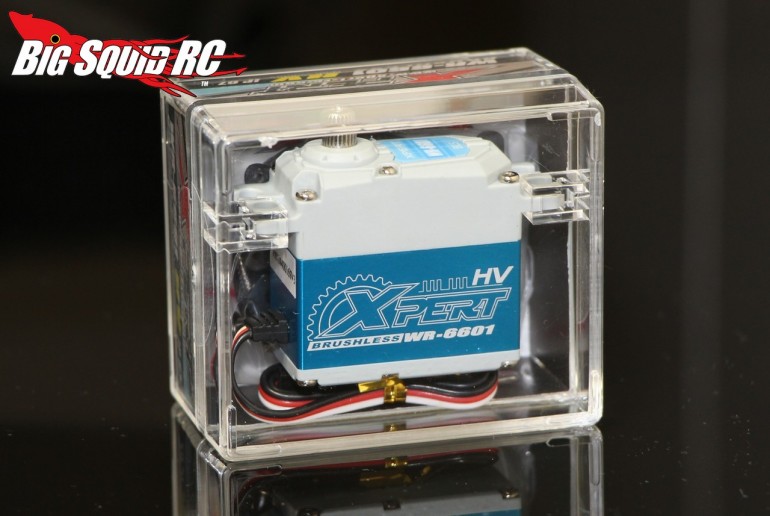 This time of year in the Midwest can be a mess, if it’s not raining every other day, it is snowing. As you already know as a hobbyist, water can be bad news for electronics.

Recently the BigSquidRC Bash Crew got the opportunity to test one of the latest waterproof servos on the market, the Xpert WR-6601 HV. While its waterproofing is a huge factor for us in the Midwest, it also comes with other important features like a brushless motor to make it smoother and more efficient, metal gears to make it tough, and an aluminum case to help dissipate heat. After a few weeks of use what did we learn about the WR-6601 in the real world?

* The first vehicle we installed it in was a Thunder Tiger MT-4 G3 monster truck. The 6601 is a high torque servo (257 oz/in at 6 volts), so we thought the big Thunder Tiger would make a good test for its power. After a bunch of driving we found the 6601 had plenty of torque, even for the big 8th scale MT-4 G3. At a dead stop it could easily swing the tires, while in high speed corners it could keep the tires pointed exactly where we wanted them to be.

* We found the Xpert to not be as noisy as other digital servos on the market. Some servos sound like they are constantly fighting themselves and can make quite the buzzing noise, but the Xpert was not that way. It did make some noise, but not to any extreme.

* The 6601 was exceptionally smooth like a good high-end servo should be. As we would slowly sweep the front wheels there was no lurching or hesitation, just buttery smooth movement.

* We didn’t experience any “brown out” problems while using the Xpert. Some servos on the market are extremely power hungry, causing the BEC on some ECSs to get overly hot and stop working. We did not experience that problem from the Xpert.

* During our testing period our area received a lot of rain and some snow. Our 6601 was exposed to a lot of water and works fine today.

* The second vehicle we installed the 6601 in was an ARRMA Kraton. The 6601 is rated at a transit speed of .15 at 6 volts, which isn’t blazing fast but felt plenty of fast while driving. Our mid-level and novice drivers never felt its speed held them back. Our pro level drivers wished for a bit quicker speed, but once they got used to the feel they didn’t have any complaints.

* Both of our test vehicles had built in servo savers, thus saving the servo from a lot of abuse. Nonetheless, we bashed and smashed the Xpert as much as we could and didn’t blow any gears out of it.

Overall – we were very impressed with both the performance and durability of the WR-6601 and can highly recommend it to you. It hits the streets at a $99 price point and has a part number of #WR-6601-HV. To get more details simply hit up This Link over on Xpert’s official website.

Like reading reviews? Find more at This Link on BigSquidRC.