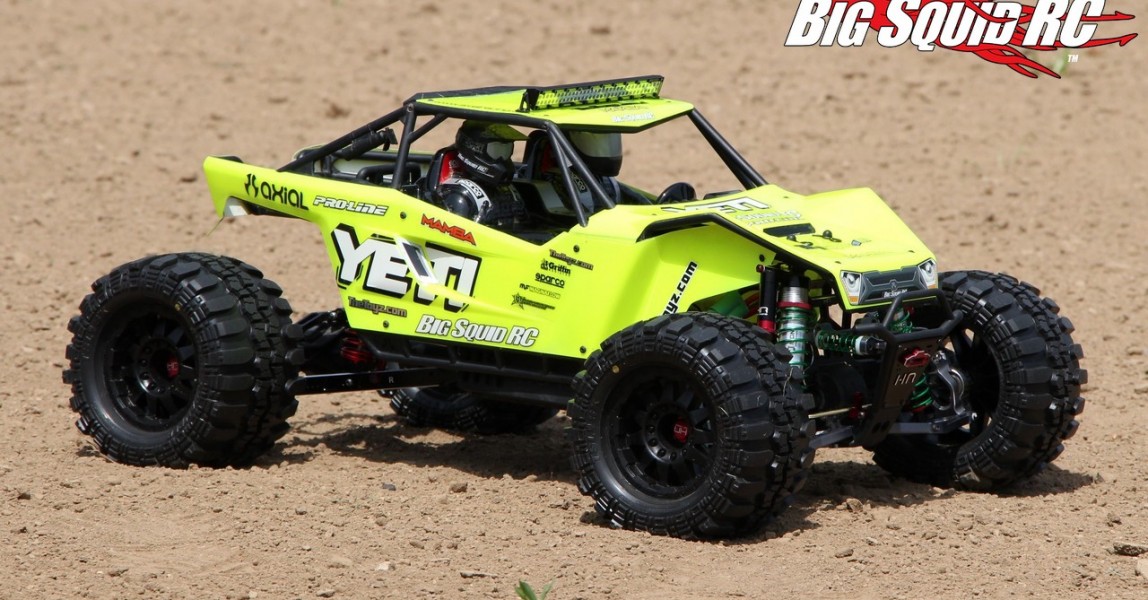 We were blown away by the Axial Yeti XL when we first reviewed it. It was huge, it had incredible scale looks, and it loved to go huge or go home. A few months later we received the kit version and we were further impressed. However, just like every one of you out there, no matter how good a vehicle is, we knew it could be made even better.

A few months ago we got with RJ over at TheToyz and asked him, “If you were going to build the ultimate Yeti XL, what parts would you use?”. Within a couple of weeks boxes started hitting our door, boxes filled with some uber looking and burly upgrades. After tearing our kit Yeti XL apart, we rebuilt it with the mods recommended by TheToyz and have been bashing the living daylights out of it ever since.

First up on the mod list were a slew of trick aluminum upgrades from Hot Racing and from GPM. Aluminum upgrades are a favorite among bashers for two reasons- 1. they look fantastic and 2. they are typically beefier than stock. In the case of our TheToyz Yeti XL Mega-Basher, we found that both the Hot Racing parts and the GPM units fit well and were indeed very beefy. As you can see by the pictures we replace a boatload of stock plastic parts with aluminum, leaving our Yeti XL with a much tricker appearance and the ability to take cringe-worthy hits without breakage.

Some highlights from the upgrades in our project included-

* The GPM front bumper with shock absorber was really neat. Not only was it a conversation starter, but its stiffly sprung shocks actually worked to soak up a good sized hit.

* The GPM steering assembly worked well but came a bit under sprung (like the stock unit) needing a couple of the washers to stiffen it up.

* Also of note for steering, we used a GPM aluminum steering arm that was very nicely done. It was much stiffer than the stock plastic arm, this helped to give the steering a more precise feel, plus it would take a monstrous hit to actually break it.

* We went with the shock caps and reservoirs from Hot Racing and had great results. They were well machined and looked like high-end aftermarket parts.

* The GPM front arms and hubs were very beefy and worked well without binding.

* To beef up the drivetrain we used a Hot Racing 68 tooth steel spur gear, steel center gear set, vented slipper hubs, and an aluminum diff cup. In addition we used a 17 tooth GPM steel pinion gear. All of those parts held up to some crazy 6S power with zero breakage.

* For the high flying antics that we perform on a daily basis, we went with the stiffest Factory Spec springs offered from Hot Racing. These are significantly stiffer than stock and do a great job of soaking up roof jumps with a heavy vehicle like the Yeti XL. We ended up using the stock shock pistons with 60 weight Associated shock oil front and rear. With that combo we could hit truly extreme jumps with very little bottoming when landing.

* The sway bar kits from Hot Racing also come with some extra heavy settings and we went with the heaviest provided for both the front and rear. The rear HR sway bar was especially stiff which did a great job of keeping the truck from torque twisting as much. Yes, it would still twist when pounding the throttle, but overall our Yeti XL stays much flatter.

* When we built our Yeti XL kit originally we used a power system that was only capable of running on 4S. Obviously for a build like this one we had to go with the most power we could lay our hands on so we installed a Castle Creations Mamba Monster 2 with a 2200kV Castle motor. To power the big Castle system we ran 6S worth of Reedy WolfPack power. This set-up was absolutely top notch with the over-the-top power we were looking for. We knew up front that the Yeti XL is a heavy beast, thus making it a real challenge to get serious speed, but the Castle and Reedy combo easily gave us the insane power we were looking for.

* Where we bash you can’t just show up with stock wheels and tires. Why? Because that is usually the first thing that everyone replaces on their bash-mobile after they get it. We really liked the looks and performance of the stock Yeti XL tires, but we knew that the King of Tires, Pro-Line, would surely have something to up the bash factor on our Yeti XL. Indeed they did as we bolted on a pre-mounted set of 3.8″ Interco Super Swampers and reaped loads of benefits. The Pro-Lines not only gave a boatload of forward traction, but they also dug in less during corners which resulted in less traction rolling. We also loved how the Super Swampers looked on the big XL. They had a scale look yet added a bit of monster truck styling to the beast.

* The 66 (Sixty Six!!!) LED light bar from Hot Racing looked fantastic on our Yeti XL and put out some intense light. I don’t think we have to say that night drives are not a problem any more. They are also great fun for blinding people across the street (block???) after the sun goes down.

The stock Yeti XL was a great all around machine that was especially good on the trail. With the help of TheToyz, Hot Racing, GPM, Pro-Line and Castle Creations, it is now an entirely new beast looking to eat up and spit out the nearest Revo/Savage/MT4 G3. The ultra firm suspension soaks up the kind of extreme landings that the stock suspension bottomed like crazy on, while the extra stiff sway bars and Pro-Line tires keep it from flipping over nearly as much. Lastly, the 4S set-up that we ran originally in our Yeti XL kit had good power, but the Castle Creations and Reedy combo that our Mega-Basher sports is the kind of insane power that every basher dreams of. Yes, our TheToyz Yeti XL turned out to be the extreme basher that we lusted for, in fact it just might be the gnarliest we’ve ever driven, it is that good.