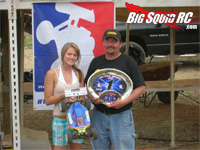 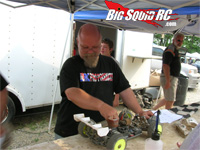 The opening round of the RC Pro Series Great Lakes Division was held last weekend in Ohio. As I pulled up to the venue, I found out it was being held on a horse ranch, complete with lots of horses, cows, and working dogs. The Hidden Springs Ranch is just outside of Enon Ohio, near Springfield, and was a beautiful place to put an rc track. The track was nearly as beautiful as the surroundings. It was well designed with lots of jumps, bumps, and even a wagon wheel corner.

Friday was an all day practice session, then Saturday brought on 4 rounds of qualifiers. Carlton Eppes, owner of the RC Pro Series, flew in for the race, and along with the local track personnel, made sure everything ran smoothly for the roughly 100 racers. 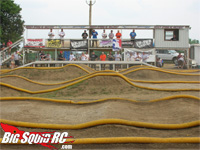 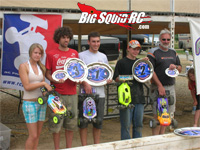 The next class up was Intermediate Arena Truck (Truggy). Mark Waggoner took the win, with Koby Kubrin second, and Josh Johnson in third.

Open Arena Truck was up next, where Frank Cascio too the win in the A, with Keith Caudill close on his heels in second, and Stephen Christian in third after 30 minutes of racing. 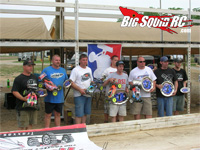 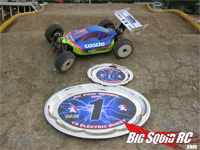 The first Pro class up was Pro Arena Truck. The Pro mains were 45 minutes long, and while the Hidden Vally track held up very well over the weekend, it did get rough and rock hard in spots, which would take its toll on some cars. Carolina native, and Associated driver Brandon Melton, had garnered the TQ spot after Saturdays qualifying. Off the start of the 45 minute main, Brandon was quickly passed by second qualifier and Losi driver Kevin Wilson. Wilson took off like a man possesed, but eventually ran into mechanical problems and had to back off and finish third. TQ Melton regained the top spot near the end of the main, put in some really fast laps, and never let go of it to put his RC8T on the top spot of the podium, with Rob Schaffer finishing a mere 14 seconds behind him for second after 45 minutes of racing.

The first buggy main of the day was up next. The Intermediate Buggy class was won by Jake Waggoner, with Chad Wipperman in second, and Andrew Cornwell finishing third.

Open Buggy was then up, with Mo Denton winning by 2 laps, 11th qualifier Jerry Acord in second, and TQ Dayton Miller coming in third.

Last race of the event was the Pro Buggy A Main. Tye Spellman fought hard on Saturday to secure the TQ position, but ran into problems during the main, dropping him back to 9th by the time the checkered flag waved. Kevin Wilson wasn’t about to let a big lead slip out of his hands, and this time his Losi held up great. Wilson lead nearly all the 45 minute main with great lines, fast pit stops, and just plain driving his tail off for the win. Losi pilot Jason Hudson kept Wilson in his sight for much of the main, getting close a few times, but lappers and a few other small problems would relagate him to second. Finishing off the podium in third was bump-in #12 qualifier Jason Conley, who was flat out hauling around the challenging Hidden Vally track.

Special props to Carlton Eppes, Bud, Kenny, and the rest of the crew that put on this event, as it came out great fun for everyone. The track was fun and didn’t get blown out, the venue was quite beautiful, and the race program was run without flaw. Throw in some awesome trophy plates and cash money for placing well in the Pro classes as icing on the cake. Yet another awesome RC Pro Series event on the books.