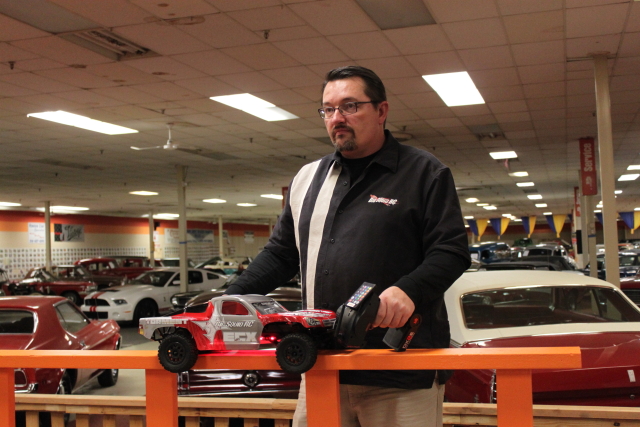 During the 2011 iHobby Expo the BigSquid guys got in a rather heated debate, we knew the ECX Torment was a good basher, but could it actually win a race? Cubby was rather vehement that it was impossible, even at the local level, while I was sure that indeed it could.

Once we got home from the show Cubby and I had a long discussion. I was going to race the Torment at a local club race, but Cubby would only allow mods costing under $5 each to be done to the truck. Cubby theorized that given enough cash the Torment could win the IFMAR worlds, so to keep it realistic only cheap mods were allowed. Fair enough, the challenge was on. Click through to see what went down..

I formulated my game plan, to make several inexpensive yet effect changes that would help the Torment on the track. First I’d work on taking some of the parachute effect out of the body, then work on the suspension, and finally try to milk ever last drop of power out of it.

Body: Two wheel drive short course trucks can be hard to jump. Once in the air their body acts like a wing, and with only two wheel drive and limited power, hitting the gas or the brake doesn’t make a huge effect on the attitude of the truck. There isn’t an aftermarket short course body on the market that costs less than $5, so that left me venting the stock body to help eliminate the parachute effect. I started by cutting out both the drivers and passengers windows, then I used a body reamer to open up large holes in the hood and at the rear of the truck. Also, the body on our Torment was too low to the chassis causing too much tire rub in the rear of the truck. I raised the rear body mount by one hole to help reduce this unwanted drag. Total cost for the body mods was $0.

Suspension: Out of the box the suspension on the ECX works well, but it likes to traction roll on high grip surfaces. I would be racing the Torment on a high grip carpet track so I had to get the traction roll out of the chassis. Thankfully Associated T4 springs cost less than $5 on Tower Hobbies, so I installed a set of red’s on the front of our Torment. Red is the heaviest spring Associated sells for their T4 and is a lot stiffer than the stock springs on the Torment. The Associated springs bolted on with no modifications required. Associated shock oil sells for under $4 on Tower, so I installed much heavier oil in all the shocks, 50 weight in the rears, and 70 in the front. The stock rear springs on the Torment were already fairly stiff so they were not changed. I set the ride height to arms level in the front, and bones level in the rear. This set-up totally eliminated traction rolling on the Torment. Total cost of suspension mods was $12.

Power System: Dipping the stock brushed motor in water to full break in the brushes was my first mod. I used a Duratrax ICE charger on motor break in mode. I ran the stock motor at about 2.5 volts for 45 minutes to fully seat the stock brushes. My next mod was to eliminate the connectors between the motor wires and the speed controller. I cut off the stock connectors and direct soldered the wires back together. Cubby had already installed Traxxas connectors on the battery leads, these cost about $4 on Tower so they were allowed. Total cost of power system mods was $4.

Tires: There are no aftermarket tires under $5, thankfully the stock Torment tires had good grip on the carpet track I was racing on. I did do one cheap mod to help increase grip, I balanced all four tires with Racers Edge wheel balancing putty. Total cost, $4.

The End Result: I raced our ECX Torment at Jake’s Race Place in Fairmont City Illinois, a carpet off-road track. For comparison purposes I drove the Torment in qualifiers 1, 3 and in the main, and raced BigSquids box stock Losi XXX-SCT in the second qualifier. The Losi XXX-SCT was completely bone stock, the way it came out of the box was the way I raced it. My fastest lap with the Losi was 19.3 seconds. My fastest lap with our mildly tuned ECX Torment was a 19.8.