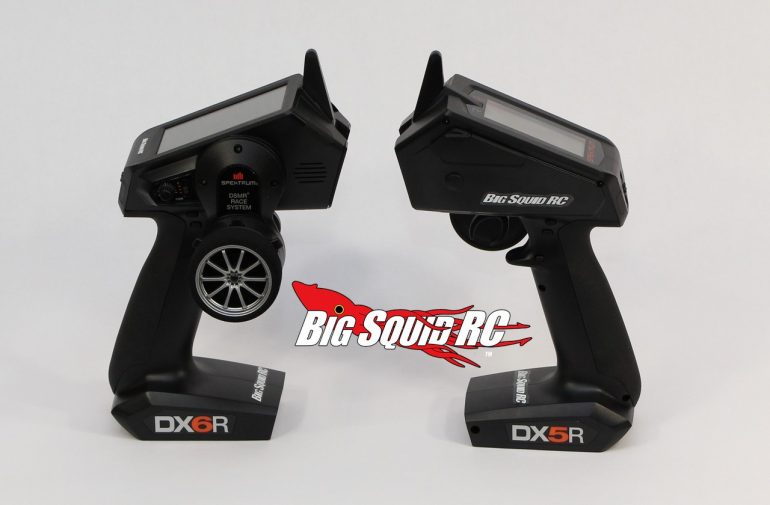 While RTR radios have come a long ways, they still leave a lot to be desired for the rc enthusiast. Upgrading from the stock radio to a higher-end unit can really help make life better for you. How is that? A good radio can control all your cars so you don’t have to drag around a whole box of RTR units. They also come with much more advanced features, as well as improved ergonomics. Also, an upgrade radio shows the people around you that you take your driving seriously.

We finished up our review of the Spektrum DX6R about the same time we started in with our review of the DX5R. To help you bashers figure out which radio is best suited for your needs, we decided to do a little comparison. We gathered up a bunch of the BigSquidRC Bash Crew members and went to our local park to try them out, side by side. We also decided to talk over their various features and how they are suited to a typical basher.

After all the time we’ve spent with the DX6R, we still think it is the most elite radio on the market. Its Android operating system and easy to use touch screen really set it apart, but its driving performance is what cements it at the top for us. The DX6R has impressively fast response, and where as its range used to be a weak point, we’ve found that it now has outstanding range.

The DX6R has also recently received an update. The folks at Spektrum have installed the new RaceWare 2.0 software that unlocks the full potential of the transmitter, as well as fixing the bugs from earlier units. It comes with a Lithium battery pre-installed and a charge base that can be used off of AC power or a USB. Better still, for people that are ultra-picky about their ergonomics, it comes with extra grips, a smaller diameter wheel, and a drop down angle adjustment right in the box. For those of you that have a hard time programming a new high-end radio, we’ve also found that the set-up process on the DX6R is the easiest in the industry. Literally, Spektrum included everything you could even want with the DX6R. While it does sport a higher price point than the DX5R (it’s $220 more), it comes with with more features than even the most expensive of its competitors.

While we aren’t quite done with our full testing on the DX5R, we do have to say that it has to be considered one of the best “Basher” oriented radios on the market. It has a price point that doesn’t blow up your wallet, while being loaded with more features than most people will ever use. Also, like the DX6R, it comes stock with a drop down wheel, something that was previously only found on the most expensive of transmitters. The DX5R allows you to have high-end ergonomics at a reasonable price point.

As far as driving goes, we’ve found that its response is ultra-fast out in the field. While wheeling numerous cars with the DX5R, the steering response has been top notch and its throttle output is much more linear than previous Spektrum radios. We’ve also found that it benefits to the upgraded range that is now found in Spektrum systems. Our Bash Crew also feels like it is so loaded with features that a typical basher won’t simply outgrow it any time soon. Furthermore, with 5 channels of ouput and a 250 model memory, it is perfect for your entire collection of cars, monster trucks, scale rigs, and boats.

The DX6R is the baddest boy on the block, any block. We use it daily for bashing, not only because it is ridiculously trick and we can watch YouTube videos on it (and visit BigSquidRC.com thanks to its browser & WiFi!), but also because it is easy to use and gives us top-of-the-line performance.

The DX5R offers much of the same performance and ergonomics at an easy to reach price point. It drives incredibly well and is also exceptionally easy to program and use.

In our opinion, if you are really starting to take the hobby seriously, and don’t mind cutting the check, the DX6R is arguably the best radio on the market for not just racing, but also for bashing. If you want to save some bucks while still enjoying high-end ergonomics and performance, the DX5R is a total no brainer.