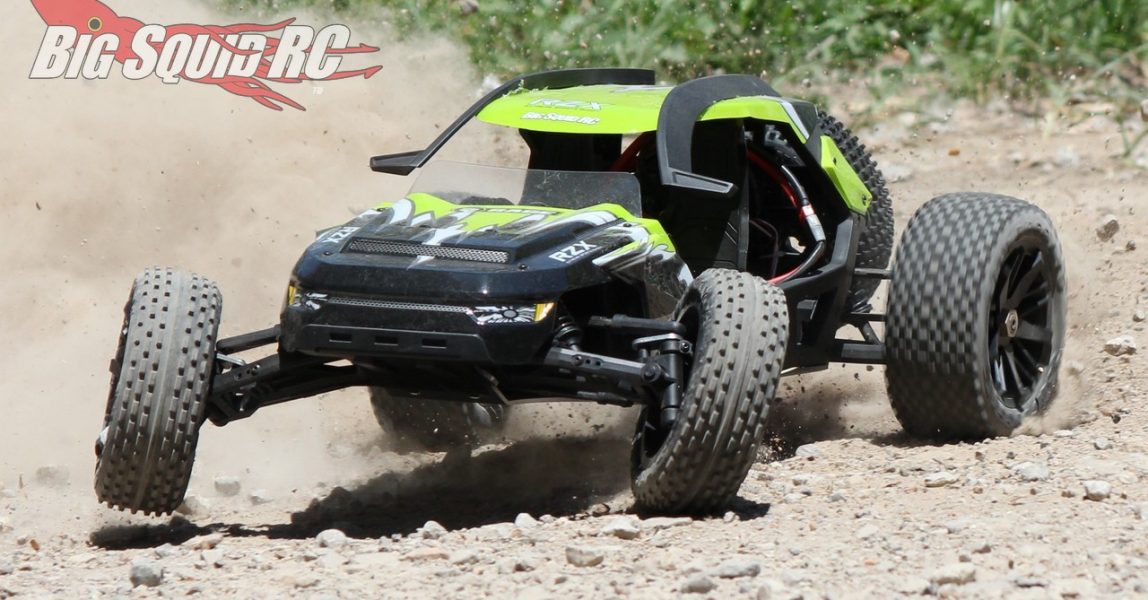 Now hitting the market from Rage RC is the beastly RZX 1/6 Brushless Buggy. The RZX is an affordable large scale alternative that promises monstrous power, along with unique buggy styling. We’ve been bashed a RZX for several weeks to check out how it holds up, plus to see how it fits into the large scale world. Is the RZX a true beast? How fast does it go out of the box? How hard is it take to break? You know the drill, keep scrolling for the good stuff…

Primary Competition: No, there aren’t a lot of sixth scale 2wd buggies on the market, but we would put the RZX up against over large scale vehicles from Traxxas, Losi, Redcat, etc.

What’s Needed To Complete: You will need some AA batteries for the transmitter, 4S worth of LiPo power for the buggy, and a battery charger. Otherwise, the buggy comes completely pre-built and ready to bash.

Build Quality: Our test crew did not find any fault with the build quality of the RZX. The shocks were properly built and not leaking, all the screws were tight, the gear mesh was good, etc.

Test Venues: We drove the RZX like we stole it at our local 8th scale nitro track, plus a bunch of different parks. From high bite track conditions, to sand, mud, and grass, our review RZX saw a huge variety of different terrain.

Set-up Notes: We left the RZX completely bone stock for our review. For power we mostly used a pair of 2S 5250 MaxAmps batteries which did a fantastic job of propelling the beast. Charging duties were easily handled by a Hitec RDX1.

Turning: We are stoked to report that the RZX turns well. It doesn’t have an extremely tight turning radius, but the front does tend to “stick” where the wheels are aimed at. The RZX features a “mid-motor” layout that is great for protecting the motor, but also helps with weight distribution for excellent cornering. Now, you can’t hit the extreme inside lines with the RZX because of its massive size, but the buggy turns quite well in medium or large corners. Also, it rarely traction rolls and actually drifts corners like a champ in the loose stuff.

Jumping: We found that the RZX tended to jump a tad nose high on flatter jumps, but not vastly so. It would generally float the nose a bit over an “average” ramp, and stayed fairly level from side to side. Being a 2wd, there isn’t a massive change in pitch when slamming the brakes or hitting the gas, just a nice controllable shift. The extremely large size of the RZX allowed it to ignore most of the bumps and ruts on dirt jump faces, making it easy to launch straight off of lips. The one downfall that we found in the RZX’s jumping game was the landings. The shocks were damped too lightly with caused the buggy to bottomed out heavily, even on smaller jumps.

Bumps/Whoops: While the long chassis of the RZX is ideal for rough sections, the stock shocks are under damped for both compression and rebound. This gives the buggy some hop in the rough sections. Having some bounce can be great fun while bashing, but if you are a more serious driver you’ll want to drop some AE 50 weight oil into all the shocks for a more planted feel through the whoops.

On-Road: The buggy was a lot of fun on pavement. It had outrageous power, or at least enough to really balloon the stock tires, so even doing speed runs was entertaining. Otherwise, its size allowed it to ignore potholes and to jump smaller curbs.

Grass: Oh yes, large scale rc cars just love grass and the RZX is no exception. The stock tires did a decent job of getting traction, but its big power system is what really kept it hauling. No, it won’t get around in super tall grass like a 4wd large scaler, but it will easily conquer the grass in most peoples backyard.

Tires: The stock tires were not super hard, but they were not super soft either. Often times in larger scales you see harder compounds used for longevity (and anti-balloon) reasons. In the case of the RZX, the stock tires were best on hard packed dirt, but also got along well in gravel, in grass, and on pavement. They were not at their best in loam, sand, or mud, but still did a reasonable job. The rear tires didn’t have a ton of side-bite, which actually worked in the buggies favor by loosening up the rear. This helped the buggy get around tight 180s more easily, plus it helped to keep the buggy from traction rolling when landing a bit sideways off jumps. Oh and, one last thing, they also make a really cool squealing noise on pavement.

Power: Big power is the name of the day with the RZX. Stock the buggy does 48 mph on just 4S, and it has tons of wattage on tap. The programming of the ESC is very soft right off the bottom, and the buggy would stutter from a dead stop at times. The mid-range was smooth, but the real fireworks begin after you hit 90% throttle. That’s when the bulk of the power gets dropped and the RZX takes off like a rocket. While the RZX doesn’t have the smoothest delivery of power, it has what a lot of bashers like, a serious kick in power up top.

Radio: Our test drivers didn’t have any big complaints on the included transmitter. Its handle was on the smaller side of things, but generally the ergonomics worked for us. We didn’t experience any glitching and we never ran into an issue with range.

Broken Parts: For the first half dozen packs or so, we drove the buggy “normally”, meaning like a normal consumer would drive it for casual backyard bashing. The RZX took a number of spills and end-over-end crashes with no ill effects. Later, we ramped up the driving and went a bit more extreme. Eventually we hucked the RZX off an embankment and ended up casing the landing on a large rock (the size of a 1/8 monster truck). This broke one of the rear shocks. However, the embankment was well over 10 feet tall, so to case a jump (to a hard surface) from that height, well, most anything is going to break on that one. One more note, we did end up throwing one rear tire, so keep an eye on them and keep the CA handy just in case.

The RZX comes with electronic stability control and we found that it worked quite well. With the RZX being a 2wd buggy, the stability control came in quite handy on looser surfaces. A gyro is used inside the buggy to sense when it starts to slide out, then the buggy will automatically counter-steer to prevent a spin-out, very cool!

How about that futuristic buggy look? No, the front of the roof does not bolt down to the chassis. Two body clips keep the roof down while driving, but easily allow it to rotate backwards for battery removal and install.

We found that while the RZX was a missile out of the box, it was geared too tall. We recommend using a temp gun on your initial run (every minute or so) to keep an eye on temps. We were testing in super hot conditions (80 degrees F or higher) which did not help, but you may need to drop a couple teeth on the pinion depending on your driving and ambient temps.

Our bash crew got along fine with the hard plastic seats and the battery tray. The battery tray had plenty of room for batteries and was easy to use.

Thank goodness the RZX comes with high quality Deans connectors. Quite frankly even we wear tired of the crazy “connector of the week” game, just give us some good old Deans like Rage RC does.

The spare on the rear looked decent and was a nice touch of realism to put on the buggy.

Talking about realism, the dash on the buggy looks incredible and is molded from a hard plastic.

Best Mod: Pop on another pinion with a couple less teeth for longer runtimes and lower motor temps.

Time To Bash: B We had no problems getting the RZX up and running. All the electronics are pre-bound and calibrated, all you have to do is install some batteries and bash.

Workability: C While all that bodywork look nice, it can make for some extra wrenching when the time comes.

Car Show Rating: B The unique look of the RZX can certainly turn heads down at the local bash spot. Oh ya, our test crew loved the looks of the stock wheels- ultra-aggressive.

Bash-A-Bility: B The RZX held up to normal bashing just fine, we had to go hard to start breaking parts.

Fun Factor: B The BigSquidRC found out that the RZX was also big fun. What was the high point? The ability to go over insanely rough terrain thanks to the buggy’s large size.

Handling: B The RZX corners quite well, but could use heavier shock oil to help tame the whoops.

Value: B The RZX gave us hours of fun at an extremely affordable large scale price point.

Parts Availability: C The RZX parts are now at a good amount of online retailers! If you need parts, places like RC Planet, Vortex Hobbies and Hobby Recreation Products will have you covered!

BigSquid Rating: B The Rage RC RZX is fast and fun. It has more than enough power for its 1/6th scale chassis and is great fun in the backyard or down at the local park. If you are looking to get a large scale vehicle without crushing your wallet, the RZX is a solid choice.