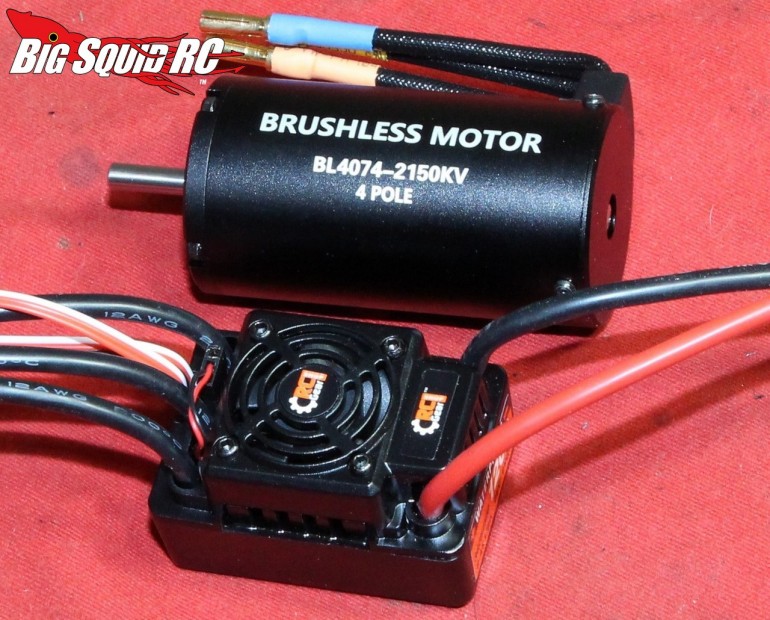 RC Gear Shop is a new line of affordable gear from Tower Hobbies. One of the items in the RC Gear Shop line-up is a 2150kV Brushless Power System intended for 8th scalers. We’ve been bashing the living daylights out of one to find out how it stacks up against the competition. Does it have plenty of power? Does it cog? Did it last? Keep on reading to find out…

Test Platform- We only used the RC Gear Shop system in one vehicle, the Axial Yeti XL Kit. We installed it in the Yeti XL because it represents a VERY heavy load on any power system, giving the RC Gear Shop system a real workout. The brushless system was used alongside several different steering servos, one from Hitec, one from RC Gear Shop, and one from Futaba. Power was provided by a pair of MaxAmps 2S 6500 mAh LiPo batteries, and we used a Futaba 4PX as the transmitter.

Upsides- There are lots of upsides to the RC Gear Shop system. Its BEC had no problem handling any of the servos we threw at it. It had an extremely smooth powerband. It never cogged on us. Lastly, it put out good power.

As far as the powerband went, it was very smooth from a dead stop, smoother than most sensorless systems on the market. Its mid-range power was also quite smooth and it ripped hard up top. Overall, there was no massive hit at any stage going through the throttle, it was just solid power everywhere.

For raw power, it certainly wasn’t lacking. It had plenty of stump pulling low-end and more than enough raw wattage to get the huge Yeti XL up to speed in a hurry. It also had plenty of power for the Yeti XL to throw massive roost and to make huge jumps. No, it didn’t have the most raw power we’ve ever felt from an 8th scale system, but it was no slouch either.

The RC Gear Shop system really only has two downsides, the first being that you can only go up to a 4S LiPo cell count on the ESC. Yes, 4S is really fast in most applications, but if you are looking for truly stupid speed, 6S is where its at, and the RC Gear Shop ESC won’t do it.

Its second downside is only an issue for people who don’t know how to solder. As the system comes out of the box, you’ll have to solder on 3 bullets to the ESC’s motor wires and solder on a battery connector. If you know how to solder, no big deal, but if you are a noob it would have been nice if it came with all the connectors pre-soldered.

Car Show Rating: C Both the motor and ESC are quite plain Jane looking. Both units are solid black and the lettering on the motor looks quite generic.

Bash-A-Bility: A Even when using the RC Gear Shop system in the beastly Yeti XL we never experienced any problems.

Power: B While quite strong it wasn’t the fastest 8th scale system that we’ve ever driven.

Fun Factor: B The power system had more than enough yank to put huge smiles on our faces, but the smiles would have been even bigger had the ESC been able to do 6S.

Value: A 8th scale power systems are usually pretty expensive, and those that aren’t usually don’t live very long. The RC Gear Shop system is very affordable yet can handle some heavy use.

Big Squid Rating: B+ We were very impressed with the RC Gear Shop 8th scale brushless system and can highly recommend it to you.