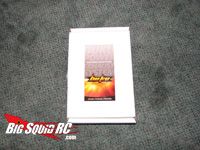 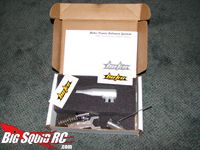 Lets start off by saying this aftermarket pipe is not for the novice or newbie to RC nitro vehicles. Learning to tune a nitro engine can be a pretty overwhelming thing, and adding another tuning variable to that mix may be too much for some.

Ok, now that the newbies are gone, lets get down to business! The Buku Power pipe is an aftermarket tuned pipe designed to get the most power out of your nitro engine, and it does that because it can adjust itself on the fly as your vehicle accelerates. Buku has a really cool cut away pipe video on their site that you should check out, it’s pretty impressive the way the whole setup works. 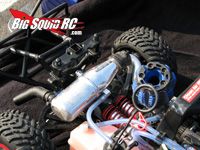 So Firesprink182 and I headed out to one of our usual test locations with a pretty new Traxxas Slayer in hand. I believe most of it was still stock at the time, so it was going to make a good test vehicle for the new pipe. We spent some time driving around the parking lot and then doing some short speed runs to dial in the engine to where we thought we were getting the maximum performance that we could squeeze out of the Slayer. 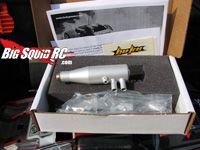 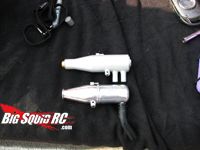 After we were happy with the performance, we pulled out the Buku pipe for small block engines. The New Buku pipe is the top one in the photo on the right. It’s not white like the picture came out, but it’s more of an unpolished silver with a bit of a texture to it. Other Noticeable differences are the location of the hole to hold down the pipe to the chassis and the dual exhaust ports. 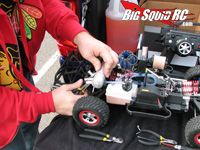 Installation went very smooth, and the directions provided with the Buku pipe are very well written and easy to understand. This was a good thing because the pipe is a little intimidating. We attached the tuning plug per the directions and fired up the engine. ‘Nice!’ was the first comment. The new sound of muscle humming from the pipe was a positive one. The sound alone told you that something has really changed, and we were about to find out what.

We put the vehicle on the ground, and gave the throttle a few small blips just to make sure we didn’t miss any steps, and nothing was going to fall off. Then with the strong pull of the throttle we were off! The Slayer lifted it’s front wheels off the ground as the rears spun out and actually lost traction. That didn’t happen before! We had some serious power!

To the naked eye we could tell that the power and acceleration had really increased! We went back to our short speed run setup. Basically we had about a 50 foot section that we would run from a dead stop. We used a radar gun to get the speed at the end of the 50 feet, and we had our video camera setup in the exact same location as we did before the Buku pipe. Our results were impressive. While we didn’t see a big increase in the top speed in the short run. (we were barely into 2nd gear) we saw that the distance traveled had been much faster! In other words, the Buku pipe was much faster off the line and through the finish then the stock pipe! I’m working on a video to show the differences, and will post it up shortly. 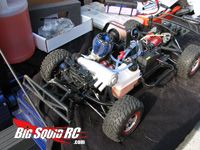 Because of the power increase, we could easily re-gear to a taller ratio if we were looking for a higher top speed. For racers and bashers this may be an option you want to try if you are doing a lot of big straights and the top speed is important. On the other hand, the faster acceleration was great because we could come out of turns and have more then enough speed to hit the next jump at the track. As bashers, the new power and acceleration allowed for shorter run ups to ramps and fun lifting the front wheels off the ground as we ran around the parking lots.

In the end, if you are looking to get every last ounce of power out of your nitro vehicle, and you know what you are doing when it comes to tuning, this might be the pipe for you. It’s not the cheapest aftermarket tuned pipe you are going to find, but it’s probably the best and most adjustable!

Big Squid Rating – 9.0/10 – Tentacles.. If you need more power, have the money and tuning skills, this pipe is for you!