From: Activision and Treyarch 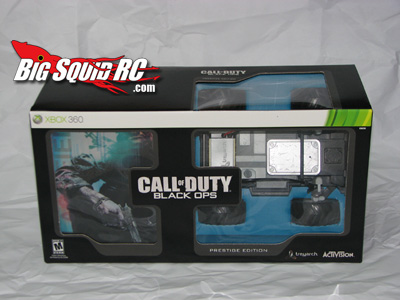 So we got our hands on the Call of Duty – Black Ops Prestige Edition with RC-XD Vehicle! We already did the UnBoxing and it was finally time for some action! I have to admit, during the unboxing I was already pretty worried but the fact that it came with a little stand. In my head I was having flash backs of the Gears of War RC Centaur Tank Review because that vehicle was NEVER meant to be driven! Was this going to be the same thing? They even included something for it to sit on my shelf so I wouldn’t be tempted to try and actually use it? Lets see… 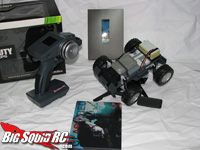 First things first, adding the batteries. For some reason, you can’t just slide the bottom off the transmitter like normal, it’s held on with a screw. Same with the battery box on the car. I’m guessing this is some sort of ‘toy safety’ measurement to keep kids from eating batteries or something. 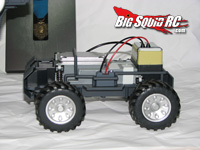 The vehicle itself isn’t too shabby. While it’s not rc hobby grade, it’s not a plastic model that claims it’s a rc car. The shocks work, but aren’t going to let you go jumping this thing off ramps without damaging something. The transmitter has a tiny two inch lcd display with a button to adjust the volume from the microphone in the vehicle, you can also turn off the display to save power. There’s another button for HIGH and LOW speed. At low speed, it’s a crawl, maybe 1 or 2mph, while high speed is probably closer to 5. The steering while is actually pretty poorly done. It’s just plastic without any grip at all. It’s almost slippery. ANY type of rubber or foam would of been better. 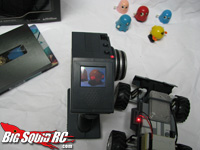 The LCD screen shows the image from the camera mounted on the front of the RC-DX, and updates better than I expected. While it’s not 20fps, it’s not horrible, and there isn’t too much lag. There is a meter for transmitter battery and for the vehicle battery so you know when your running low.

They recommend running in LOW speed for using the video monitor and high speed for just running around. This becomes obvious after you start to try and drive by only using the camera. The picture starts bouncing around and blurring and it gets tough to see fast. At low speeds, it actually works well. I was driving around corners, intro rooms I couldn’t see into, and navigating myself back out without any problems. This actually brought a smile to my face! 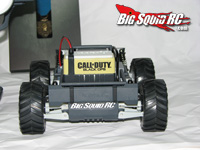 The microphone pics up everything, and if you are driving the vehicle, the noise from the motor and steering completely drowns out anything else, but if you sit still, you can hear other people talking and room noises.

Overall, I have to say I’m impressed with what Activision has shipped. While it’s no where near hobby quality, it’s not a total piece of junk I want to smash with a hammer. You are not going to run out and buy this vehicle just to have a RC vehicle, but as a add in to the collector edition, it’s pretty cool. Good job guys!

Maybe tomorrow I’ll have time to try the free game that came with the car, I hear it’s decent! 😉

Make sure to check out all the UnBoxing pictures here.

Car Show Rating – 9.0/10 – Looks like the vehicle in the game. LCD Screen on Transmitter is pretty slick!

Bash-A-Bility – 6/10 – It can probably be broken pretty easily, but we are not gonna test our luck.

Now with video of it in action!


For some clarification, these scores are not based on or normal RC car ratings, but against other ‘TOY’ cars and pack in’s. It’s a LONG ways away from being a 8 in the hobby world, but for a RC truck that came with a xbox 360 game, it’s not bad.